Where each party stands on life, family, and freedom

We will, however, say that it’s very important that you let your voice be heard on Monday, and do what you can to vote for the candidate that best represents your values.

It’s been the aim of CitizenGO from the very beginning to fight for the common good and for the dignity of every human person. We strive to protect life from conception to natural death, the recognition of family and the most basic and natural unit of society, and freedom.

For this reason, we think it’s important to break down the platforms of each federal party, so that you know how each party winning could affect our country when it comes to issues of life, family, and freedom:

Five Globalists will shoot the shit in next week’s controlled “leaders’ debate. The only nationalist, pro-freedom candidate Maxime Bernier is excluded. The PPC is now consistently polling ahead of the Green Party, & has candidates in over 90% of ridings; Greens in less than 75%.

Next week, Party Leaders will descend on the National Capital Region to take part in the Federal Leaders’ Debates organized by a government-appointed agency.

As you are probably already aware, PPC Leader Maxime Bernier was unjustly excluded from these debates.

Why is Annamie Paul included while Maxime Bernier is left out?

Because the Green Party does not disrupt the mainstream narrative! The establishment knows that if Max is given a credible platform, his message will resonate with average Canadians, and the narrative will crumble.

We will not stand by while the establishment elites in the government and media try to silence us.

We will be gathering outside the venue on Thursday, September 9th to show our support for Max and the PPC and demonstrate that we will not be ignored!

In the Green Party, Support for Israel is Required

Former Green Party four-time candidate Monika Schaefer says that she learned that, at its core, the Green Party is green on the outside and red on the inside. Well, if not red, at least stridently Zionist. Recently, the Green Party elected a new leader to replace Elizabeth May, who, it must be remembered, refused to even answer pleas for her to help her former colleague  political prisoner Monika Schaefer, when she was jailed for 10 months in 2016 for a video she had posted (“Sorry, Mom, I Was Wrong About the Holocaust).

The Greens, like  their leftist counterparts in the NDP, seem unable to resist the lure of “diversity”. The NDP chose Turban Guy, Jagmeet Singh, a media favourite, who promptly lost half their seats in the 2019 election. Much of the party’s base wasn’t so keen on this “diversity”. Now, the Greens have chosen a Toronto Black Jewish lawyer, Annamie Paul. She came first of eight candidates. Close runner up was Dimitri Lascaris of Montreal, who describes himself as an “eco-socialist”. However, it’s not the degree of state intervention that can get you kicked out of the Green Party: It’s your commitment to supporting a foreign state.  Lascaris was kicked out of the party leadership for a while because of his views on Israel and, according to  outgoing leader, Elizabeth May and incoming Zionist Annamie Paul, Lascaris should be kicked out of the party. The National Post (October 3, 2020) reports: “At the beginning of the race, frontrunner Lascaris’ candidacy was rejected by the party’s vetting committee in late May due to ‘public statements on a number of issues’.

Though the party’s Leadership Contest Authority did not detail the issues, Lascaris was widely criticized for an ‘anti-Semitic’ tweet in 2018 accusing two Jewish Liberal MPs of being more loyal to Israel than their own country.” [How is that anti-Semitic, if it happens to be true?] Though race frontrunners Paul and Lascaris agree on many policy decisions, their views on Israel differ strongly.

During the party’s convention in 2016, Lascaris successfully moved the resolution to support the “Boycott, Divest, and Sanction” movement — colloquially known as BDS — against Israel. During her time as leader, May never seemingly officially abided by that resolution.” [So much for party grassroots democracy! Far from “telling truth to power”, Elizabeth May was just another party leader dictator like the Big Three.]

In separate interviews with Global News published this week, both May and Paul said they thought Lascaris should have disqualified him from the race. ‘There is no question that the Green Party has work to do in addressing racism, anti-Semitism, systemic discrimination in all its forms,’ Paul told Global News. ‘My view and the party’s views are solid on this: to the extent that anyone who is running for the leadership of the Green Party of Canada and who has expressed anti-Semitic views, they shouldn’t have been allowed to run,’ May added.” [And “anti-Semitic” is criticism of Israel!] 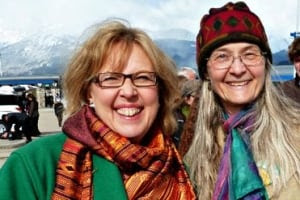