Ursula Haverbeck, nominated the grand Dame of German Revisionism by the late Prof. Robert Faurisson, “celebrated” her 91st. birthday in prison. Yes, you read that correctly: Frau Ursula Haverbeck is ninety one years of age and she finds herself incarcerated in a prison cell, charged and found “guilty” of questioning the allegation of the so-called “Holocaust”, the allegation that the Germans during the Second World war murdered millions of Jews in homicidal gas-chambers. For expressing her non-violent opinions on aspects of the history of the Second World War which she herself lived through as a teenager, the current ruling establishment of the Federal Republic of Germany, in its viciousness, has locked this 91 year old up in a prison cell in an attempt to silence her.

On Saturday, the 9th. November, the very day of Ursula Haverbeck’s 91st. birthday, hundreds of German nationalists, patriots and friends, well-wishers and admirers of the grand Dame of German Historical Revisionism marched through the centre of the north German town of Bielefeld where Ursula is imprisoned. With great gusto we paraded with flags flying and with banners held high proclaiming Ursula Haverbeck to be a Heroine for Germany and demanding Truth and Justice for Germany. The authorities gave us permission to hold a public rally right in the centre of Bielefeld. There was of course a large contingent of Police present. And there were of course large numbers of demented Lefties shouting their usual obscenities. However our loud-speaker system drowned out all that Sound and Fury signifying nothing (Shakespeare’s Macbeth). Our rally lasted the best part of two hours; right in the centre of town; the traffic was stopped; the trams ceased running; and we held our rally without any interruption. Here is the translation of the speech that I gave on this historic occasion:

“Dear German friends, my name is Richard Edmonds, I am British.

“I have travelled here to Bielefeld to show solidarity with the very brave patriot, Ursula Haverbeck, whom I have known for many years.She is a wonderfully brave campaigner for the honour of Germany and now this fine woman must “celebrate” her 91st. birthday in prison. Shocking. Ursula Haverbeck, an educated and cultivated woman, has posed questions regarding the topic of the “Holocaust”; she has posed the most serious questions, forensic, scientific, objective questions. And for this, she finds herself on her 91st. birthday in jail here in Bielefeld.

“Yes. I know , we are in the Federal Republic. In order to make the situation clear, I will refer to the trial that took place in Mannheim in 2003, the trial brought against the German-Canadian, Ernst Zundel, yet another individual charged with “Holocaust”-denial. At Zundel’s trial, the presiding judge, Dr. Ulrich Meinerzhagen, found himself obliged to state in the open court, and I quote him: ‘It is completely irrelevant whether the “Holocaust” took place or not. It is the act of denial of the “Holocaust” which is a crime. And that is all that matters in this court.’ : Presiding Judge Dr. Meinerzhagen.

“Here with absolute modesty can I (R.Edmonds) state that in Great Britain and in the United States of America, we have complete Freedom of Speech on the subject of the “Holocaust”; this means that every type of question may be posed on this topic; and eveyone has the right to publish answers which are based on forensic, scientific, objective facts.

“As a guest here in Germany, I can only quote the former, now retired, judge sitting on the supreme court in Germany, the Constitutional Court, Judge Wolfgang Hoffmann-Riem:

‘I would not make the questioning of the Holocaust a criminal offence.’ Judge Hoffmann -Riem, July 2008 (Der Tagesspiegel, 10. July 2008)

“Finally, dear friends. I would like to quote the famous German hero, Ulrich von Huten, who five hundred years ago, said: ‘Germany is there, where strong hearts are beating.’ Thank you.” FINIS.

Finally let me make this comment: one does have to wonder if a change is now taking place in the Federal Republic of Germany, set up as it was by the western Allies at the end of the Second World War, the twin in fact of the Communist regime set up in Eastern Germany by the forces of the Soviet Union. How else might one explain the readiness of the authorities to give permission for this “Birthday celebration” right in the centre of the town where Ursula Haverbeck is held prisoner in the local jail ? The activity must have cost the town a great deal of money; vast numbers of Police were employed, and the centre of the town was effectively shut down for the afternoon: what with several hundred Nationalists and possibly as many as two thousand Lefties plus large numbers of Police officers, the result was that no trams were running through the town, no cars or delivery vehicles, access to the main-line railway station was barred for a time, little business could have been conducted that day; all this was predictable, but permission was given, in spite of counter-pressure from the usual suspects, permission was given for the go-ahead. A historic week-end. A privilege to be there.

Today I have received a letter from the brave campaigner from Truth in History, Ursula Haverbeck. Ursula expresses her astonishment and thanks for the amazing number of letters and cards of support that she receives from Britain and from France, and indeed from the whole world. In her letter to me Ursula H. singles out her specific thanks to Michele R. and to Peter R. 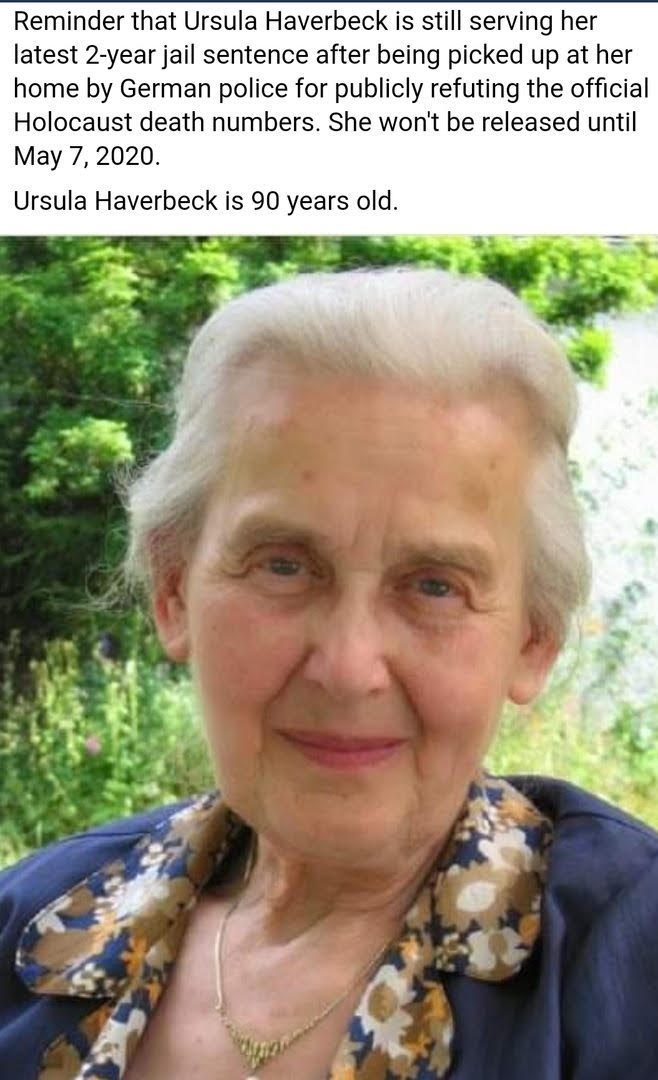 Let me repeat here, that letters and cards of support are a God-send to every brave and honourable patriot locked up in a narrow prison cell mixed in together with anti-social types and criminals, and isolated from the world and friendly faces – that’s prison, and in this nightmare “modern” world many of the prisoners will be Third-world criminals with Third-world personal habits.

All the more reason to send a friendly, cheerful card or letter, (which does not have to bear the address of the sender) to our brave Ursula:

Note on a related matter: The Jewish community in Bielefeld has raised its objections to a parade through the town, which friends and supporters of our Ursula have planed for next month, to commemorate her 91st birthday, that the astoundingly vigorous Ursula Haverbeck will “celebrate” in the Bielefeld prison (JVA).

The notice below from <bocage-info> confirms the information.

Richard.
[“Isn’t it wonderful that we live in ‘the free world’?” — Paul Fromm]
Monika Schaefer on the Brian Ruhe Show: 18 Months More in Prisoner for Dissident Alfred Schaefer for Defending Himself in Court
Just received this bad news tonight from Alfred’s sister Monika. This is the brief video we just released:

Please write to Alfred, a Canadian in prison in Germany.

SEND A CARD OR SHORT LETTER TO THIS “MAN BEHIND THE WIRE”:

Vincent Reynouard tells Paul Fromm, director of the Canadian Association for Free Expression, about his life as a revisionist. Persecutions, searches of the Police, prison, exile, grievous loss of his family (two times…). Amazing!

Political prisoner Brad Love called me collect this morning from prison. He confirmed that he is not allowed to send ANY mail out. His mail was held, without explanation, for over a month (October 15-November 18). He is now receiving mail. So, please send this “man behind the wire” — jailed solely for sending non-threatening letters to thin skinned ethnic lobby groups or politicians — a note or card.

He was called into the prison management’s office on November 19 and breezily informed: “Love, there’s a court order saying you’re not allowed to receive any mail.” Where do they find these prison personnel? In a country with a bogus “Charter of Rights and Freedoms” — really minority special privileges and rights that governments can cancel at a moment’s notice “for a good reason,” of course — and a tradition of individual RIGHTS guaranteed under our Anglo-Saxon legal traditions, you’d think the authorities might wonder: “There must be some mistake.”

Well, yes and no. There was, indeed, such as North Korean-like bail condition imposed on Mr. Love in Fort McMurray Alberta last May when he was charged with sending “scurrilous” material through the mail — strongly worded letters to the press and politicians about political matters. HOWEVER, in July, using arguments CAFE helped to prepare, Mr. Love went back to Court and had these conditions amended so that he can write to anyone, except the several individuals named in the criminal complaint.

the prison authorities also made vague threats to Mr. Love, saying he was writing “too many letters” and, if he didn’t desist, he could find himself spending more time in prison.

A date has still not been sent for an appeal against Mr. Love’s 2012 conviction and 18-month sentence for breach of probation.

Brad Love, a decade after his conviction under Canada’s notorious “hate law” (Sec. 319 of the Criminal Code) for writing non-threatening letters to public officials criticizing Canada’s immigration mess, is still mired in the toils of repression. In July 2012, for sending some information packages to some Toronto Jewish groups, he was sentenced to a further 18 months in prison, plus a further three year gag order from writing letters to the media or politicians. He applied for bail; pending an appeal. In July, 2013, this bail was arbitrarily revoked. So, for the past four months, he’s languished in jail, again for nothing more than the non-violent expression of his populist, no nonsense working guy views.

Brad was employed in a lucrative job in Alberta’s tar sands in Fort McMurray. The arbitrary imprisonment punishes him for his views, denies him an income and, ironically, denies the state a hefty junk of his pay in taxes.