It stared back in January, 1979, For 45 years, the Alternative Forum in Toronto has held a monthly meeting (except during part of the COVID madness lockdowns) featuring a speaker or film on freedom related issues. Our first speaker was Prof. W. Harding le Riche of the University of Toronto. We have had MPs like Conservatives Don Blenkarn and the Hon. Alvin Hamilton and Liberals like Roseanne Skoke. We have had writers and lawyers.

We celebrated our 45th anniversary with Director Paul Fromm’s talk:

“|Victoria is now my 18th city,” said CAFE Director Paul Fromm as he joined the weekly Saturday Freedom Rally in front of the B.C. Legislature. “This is the 18th city, in two provinces, where I’ve joined End the Lockdown/freedom rallies since April, 200,” he added. Several CAFE associates regularly attend the Victoria rallies.

“It is such a joyous atmosphere. People hug old friends and complete strangers,” Mr. Fromm added. “And not a mask to be seen anywhere!”

Two carloads of people came down from Nanaimo. A Chinese man who is a strong supporter of Taiwan comes over every weekend form Vancouver. One man handed out peanut butter and jam sandwiches to anyone who wanted one.

Members of the same group picket the offices of CHEK, the local Fake News television channel, every Wednesday.

The  Emergencies Act & The Rouleau Inquiry: Startling Revelations About the Rape of Canadians’ Rights

A Strange Sort of “All Candidates” Debate at McMaster

McMaster is one of Canada’s leading universities. On Monday, October 17, the McMaster Students’ Union hosted   sparsely attended mayoralty debate. The leaders in the race, at least as decided by the Fake News CBC, Andrea Horwath and Bob Bratina did not show up. CBC (October 18, 2022) reported: “Monday’s mayoral debate, which saw candidates Michael Pattison, Ejaz Butt, Keanin Loomis and Solomon Ikhuiwu attend, was part of the push by groups like the McMaster Student Union (MSU) to get out the vote, during the final week of the campaign.” For some unknown reason, I did not receive an invitation. This would seem to be part of a widespread campaign by Hamilton’s leftist elite and media — I was warned about this, by a man who has worked closely with the People’s Party of Canada and seen the same tactics at play — to isolate me and deny me as much exposure as possible. It’s sad that a university, which should be a forum for lively debate and clash of ideas should be so restrictive and that was the doing of the students union not the administration! — Paul Fromm

Kicked Out of A Free Speech Lecture

On September 22, the Democracy Fund sponsored a lecture by writer and businessman Conrad Black and National Post columnist and former CBC personality Rex Murphy entitled The History of Civil Liberties in Canada, Part 2 to be held at the Canada Christian College in Whitby, Ontario.. Tickets had to be ordered online from Eventbrite. Accordingly, I ordered two tickets and invited a local supporter, Raychyl Whyte, to join me. We were cordially greeted by people I took to be Eventbrite staff and invited to go into the college auditorium. I took a seat and chatted with several people I knew. Just before the lecture was to start, I was approached by a burly man who asked if I would step out into the lobby. There he told me he was the head of college security. He said: “I want you to leave. The College wants you off its property now.” I told him I’d paid for my ticked and had been admitted. “The college will refund your money,” he said. But, I had not paid the money to the college and have not received the refund

Raychyl Whyte an associate of CAFE who attended the lecture contacted Cameron Ward Events Space Co-ordinator at Canada Christian College. He said that none of his personnel had ordered me expelled: ” He told me that he has made several attempts to find out information from The Democracy Fund, but claims to be “in the dark” as much as I am, because they have not responded. He has also spoken with all management staff at the College. The most he has been able to find out so far is that an (unidentified) employee at The Democracy Fund recognized you, knew about your “past”, and did not want you there.”

Raychyl Whyte contacted the Democracy Fund which is a Canadian charity. Its directors are Conrad Black, Dr. Julie Ponesse and lawyer Bob Moran. They are very hard to reach but seem to want donations. They require you to fill out an e-mail. A “Sarah” answered her e-mail but said the fund didn’t have the capacity to return a phone call. Raychyl Whyte wrote back: ” With respect Sarah, it is curious that your organization does ‘not have the capacity to call’, but evidently ‘does’ have the capacity to e-mail.” Nearly a month after her September 23 inquiry, she has received no answer. When h learned what had happened, YOUR WARD NEWS publisher Leroy St. Germaine who was in attendance, asked Rebel News bossd Ezra Levant why I had been ejected. He said he doubted it had been by the college but by the organizers, which would be the Democracy Fund whose mandate is “to advance constitutional rights in Canada.”” Very strange!

The Great Replacement — That Means YOU!

* More people are waking up. A May Abacus Data poll found 37 % agree: “There is a group of people … who are trying to replace native-born Canadians with immigrants.”

* What is the Great Replacement? Is it just a theory?

Supporters stayed around an extra two hours discussing the issues of the day.

Paul Fromm Nominated to Run for Mayor of Hamilton

Paul Fromm for Mayor of Hamilton,

HAMILTON, August 15, 2022. Paul Fromm, a former educator and Director of the Canadian Association for Free Expression declared his candidacy for Mayor of Hamilton in the upcoming October 24 municipal election. His nomination papers were filed with the City Clerk, August 11.

“I am running for Mayor for several reasons. Hamilton City Council has become arrogant, secretive and out-of-touch. It insolently, at times, refuses to hear citizen input during the section of meetings set aside for delegations. A representative — councillor or Mayor — should LISTEN to concerned citizens. As Mayor, I will hold regular town halls to get taxpayers’ opinion,” Mr. Fromm promises.

“I am the FREEDOM CANDIDATE and the MOTORIST’s FRIEND,” he declares.

During COVID, Canadians’ rights were trampled in the worst way since World War II. “To begin with, to help repair some of the harm done during COVID, I insist that the City of Hamilton compensate all the workers put on unpaid leave for the months of lost wages,” he insists.

Further, Mr. Fromm declares, “as the MOTORIST’S FRIEND, I want the City of Hamilton to pursue a policy of moving traffic as quickly as possible. Fix the potholes that make some of our roads a menace. Do repairs in an expeditious manner.

Traffic gridlock is a costly as well as nerve wracking problem for the entire GTA. The causes are twofold: mass immigration over the past 40 years which has more than doubled the population of the GTA and politicians, at all levels, who have failed to build the infrastructure — roads, expressways, hospitals, and housing — to accommodate the influx. “The City of Hamilton must speak truth to power,” he adds, “and insist that immigration be tied to massive expenditures to accommodate the newcomers.”

” Individual freedom, for me, is a lifelong commitment. Since April of 2020, I have attended End the Lockdowns and End the Mandates freedom rallies, often many times in the same city, in 15 cities in Ontario and British Columbia,” he adds. “I was a proud supporter of the Truckers’ Freedom Convoy and, on a frigid Thursday, January 29, joined thousands of other Hamiltonians, to cheer the convoy on its way to Ottawa.”

Paul Fromm Sits Down with the Daily Rake, Part 1 – the Overview

I recently had an interview with none other than Monika Schaefer. She’s the wonderful woman who made a video fact-checking the lampshadocaust in 2016, only to have her life turned upside down by the usual suspects. Video of our interview is below.

At the bottom of the article I wrote on our interview, the first in the series, I mentioned that I had an interview set up with Paul Fromm, and in fact I finished this interview two days ago. Unfortunately, we had serious technical issues right from the very beginning. This caused us to delay the interview by forty minutes, and eventually we settled on simply having me call Paul and record the conversation with him. The video is below.

As for Paul Fromm himself, he’s been fighting for Our People for half a century now, starting out in the anti-communist days, and moving on to what we see today. One thing I did mention to him, and which he agreed with in our interview, is that it sure does seem like the communists of the day, like William “Moses” Kunstler, seem to be pushing the exact same anti-White pervert garbage as the capitalists of today.

But just as I’m doing with Monika Schaefer, I’m going to write one or more additional articles on my interview with Paul Fromm. So I won’t get too in depth as to our interview right now.

In fact, I’m not going to get too in depth as to Paul Fromm’s history either, but it certainly is interesting. Fromm has been the international director of the Council of Conservative Citizens. He founded the Edmund Burke Society with Don Andrews and Leigh Smith when he was just a teenager. He’s founded CAFE, a free speech organization, in the 80’s,

And for those who want to do the whole “SerIoUS GuYS wOrK WiThIN thE CuckSeRVAtIvE/RepUbLiCAn PaRTy” bit, he, like many of these guys, has had the ear of some Conservative politicians since back in the late 60’s. Although now he agreed with me that the Conservative Party of Canada is a thoroughly useless and in fact actively harmful institution.

He’s been involved in multiple high profile legal cases, had serious violent confrontations, all started by antifa/commies of course, been the leader of the Ontario Social Credit Party, fought against koshervatives like Jason Kenney, and is of course denied entry to the United States of America. And I guess at one point he crossed paths with Evalion. 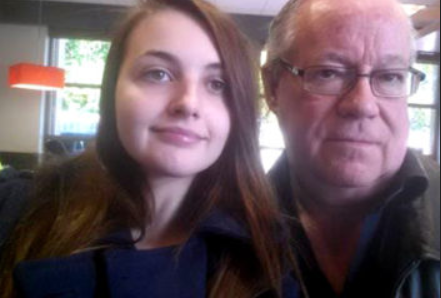 Paul Fromm with Evalion. Remember her?

I told him when I began interviewing him that I would need to wrap it up as soon as possible. I had planned something like just ten minutes, and then we could reschedule a new meeting when the technical hiccups were ironed out. Of course we ended up talking for forty minutes, and I didn’t even get to ask him about some entire topics of interest, like his defamation trial, his connection to Ernst Zundel, and many other topics.

That will have to wait for a later date. For now I’ll end here, and simply thank Paul for coming onto the Daily Rake, tolerating the technical problems we had, and accepting my stilted, scatterbrained interview “technique.” I’ll have the video up shortly, and an in depth piece will be released on this interview after tomorrow’s event — The 2022 George Orwell Free Speech Awards to Monika and Alfred Schaefer in Vancouver.