1. The hypocrisy of anti-free speech loudmouth Bernie Farber of the Canadian Anti-Hate Network is appalling. Apparently, he’d like a politically correct litmus test for receiving relief funds that we all pay for. The irony is rich in that CAHN gets government grants and a subsidy from the Bank of Montreal (BMO). They are no slouches as grantcatchers feasting off taxpayer’s funds. One of their board members announced this past summer: ” Good news! Canada is giving us a $270,000 grant through the Anti-Racism Action Programme.”.

2. Then, we must take instruction from one ” Kojo Damptey, Hamilton Centre for Civic Inclusion’s interim executive director.” He hails from that hotbed of liberty, Ghana. He’s all for a political litmus test: ” “They should have a list of organizations that espouse racist rhetoric, xenophobic rhetoric, and not provide them with public funding,” It’s 2019/2020 Annual Report shows it took in $532,477 from various governments and universities to expound its anti-White, anti-free speech propaganda: ” For the year2019/2020 we received funds from ,Community, and Social Services, Ontario Trillium Fund, Ministry of Canadian Heritage and Multiculturalism, Hamilton Community Foundation, Ryerson University, In Spirit Foundation, Hamilton Health Sciences,Laidlaw Foundation,and the City of Hamilton.”]

Anti-hate groups are urging the federal government to reconsider which employers can apply for the Canada Emergency Wage Subsidy (CEWS) after self-described white nationalist Paul Fromm received COVID-19 relief funds for two of his groups.

Vice first reported he received money for the Canadian Association for Free Expression (CAFE) after the government published a searchable registry of companies that have accessed CEWS.

CAFE is a non-profit that has intervened in several human rights cases across Canada, including on behalf of websites encouraging homophobia and Holocaust denial.

CBC News has since learned Fromm also received money for another group of his — Citizens for Foreign Aid Reform, which opposes foreign aid and multiculturalism.

Fromm has appeared in far-right protests, spoken regularly on the white nationalist radio show Stormfront, and is the subject of a Hamilton police investigation after complaints he shared the New Zealand mosque shooter’s manifesto on the CAFE website. Stormfront describes itself as being “pro-white news, opinion and inspiration.”

“I’m a white nationalist,” Fromm said in an interview. “I’m proud of our European heritage and I want to keep it.”

Still, he denies being labelled a neo-Nazi or white supremacist, and told CBC News on Wednesday that his organizations met all the requirements to receive CEWS funds.

“The criteria as I read it was not ‘What are your politics?’ The criteria is ‘Are you an employer, do you have an employer number, have you been impacted by the COVID shutdown and if so, you qualify up to a certain amount,” Fromm said.

“Given the rules, there’s not much [the government] can do.”

The government was unable to provide an interview.

Katherine Cuplinskas, press secretary for the office of Deputy Prime Minister and Minister of Finance Chrystia Freeland said the government “categorically condemns white supremacy, far-right extremism, and racism in all its forms.”

“Wage subsidy funds can only be used for employee remuneration. Should these funds have been abused, the penalties can include repayment of the wage subsidy, an additional 25 per cent penalty, and potentially imprisonment in cases of fraud,” Cuplinskas wrote in an email.

Bernie Farber, chair of the Canadian Anti-Hate Network, said he was shocked to learn Fromm successfully applied to CEWS. Neo-Nazi groups getting taxpayer money is a “a glitch in the system” from a government trying to navigate a pandemic, he added.

“I think Canadians want to hear our government say ‘Whoops, this was a mistake … it’s an outrage at a time when people are literally losing their homes and livelihoods and need this money badly, that it would be going to people like Paul Fromm.”

Fromm would not reveal the number of employees in either organization, but acknowledged the number was “small and modest.” He also didn’t disclose how much money he received but said it was “small potatoes.”

Cuplinskas wouldn’t say whether the government plans to investigate the issue further, but Kojo Damptey, Hamilton Centre for Civic Inclusion’s interim executive director, said he hopes it does.

“They should have a list of organizations that espouse racist rhetoric, xenophobic rhetoric, and not provide them with public funding,” he said. “If our government are funding racist institutions, white nationalist institutions, what kind of society are we building and what does it say to many marginalized communities that have been affected by this sort of rhetoric?”

I am writing you all to make known my disgust in denying Paul Fromm 5 minutes speaking time that I understand is allotted to delegates.
Contrary to the belief of the HCCI, Paul Fromm is not ‘full of hate’ and speaks for millions of good, law abiding Canadians on the legitimate concerns for the future our Canada.
Ive read the letter by Kojo Damptey, and looked at the HCCI website and he/they are the last thing that is inclusive. Appeasing these intolerant, special interest groups is like allowing the classroom bully to take over the classroom.
You may just disregard this email , but please take a few minutes to read this article from 2009.
RMG
https://www.dailymail.co.uk/news/article-1229643/This-isnt-Britain-fought-say-unknown-warriors-WWII.html

Marc Lemire No Longer Works for the City of Hamilton

“Inclusion” but not for different points of view! 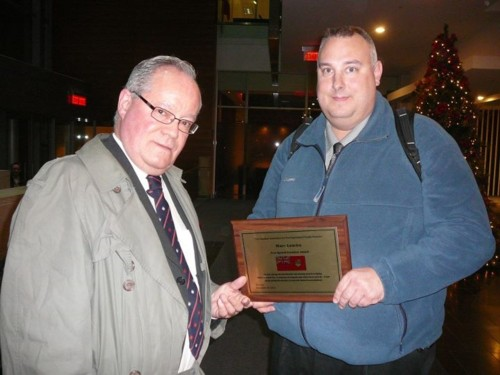 imperilled by the thought police at the Canadian Human Rights Commission