My next court date is Tuesday, June 25th, 2019 at the Ontario Superior Court, 361 University St, Toronto. My lawyer requested I be at the Superior Court for 9:30 am.

Please continue to pray for my case. For those who don’t know, I have been charged with a hate crime for infiltrating the Toronto Homosexual Shame parade with the Gospel and accurate information on the negative health and spiritual implications of homosexuality while disguised as a “gay” zombie. You can read about our charitable, clever, and Gospel oriented stunt here:

My counsel has informed me the Crown Prosecutor is seeking 18 months in prison.

Anyways, the oppression against those Christians who dare to speak out against Sodom is getting worse in Canada and it is not only me who is facing criminal charges now.

A Christian Street Preacher by the name of David Lynn is facing criminal charges for politely preaching the Gospel in Toronto’s homosexual district. His charge is a fairly minor summary offense (Causing a Disturbance) and he won’t be going to jail, but still the fact he is facing criminal charges at all for the polite preaching that you can see in the video below is a testament to the erosion of freedom of speech in Canada as the LGBT agenda advances in all aspects of our society.

Please also pray for my friend Brother Phil, and the other Christian brothers involved in this confrontation.

To put it bluntly the Hamilton Spectator and the NDP politician quoted in this story are speading fake news AKA lying. I know Brother Phil and have preached with him and his friends before. They did not come to the parade to start a fight. Though you wouldn’t know it from this fake news story, actually Antifa came to the Hamilton parade prepared for a fight and indeed they started it. Brother Phil was punched several times in the face and was swarmed by multiple Antifa members. To what I could gather Phil was hurt but never hit back and because it was at least 3 on one, might not even have been able to hit back if he wanted. Some of the other Christian brothers did fight back to defend themselves after extreme provocations.

Sadly, I doubt the police or the courts will be interested in the truth. It seems the media and political establishment are trying to use this disturbing incident as a pretext to shut down legitimate dissent on issues such as homosexual activism and uncontrolled immigration. In the news article the left is calling for right wing and socially conservative protests to be banned in front of city hall.

In my past experience dealing with Antifa (once they attacked my preaching venue in Calgary in 2017 and more than 100 of them attacked a pro-life rally I helped organize at Queen’s Park in 1999) is even though they injured people on my side, used weapons on both occassions, and at my Toronto demonstation even attacked the police and injured one of their horses; the Antifa thugs never went to trial and were never convicted of any crimes. Christians who speak out against abortion and homosexuality on the other hand do go to jail in this country, even when they are completely non violent. I fear charges will be laid against the Christian brothers who defended themselves, but we will not see a single homosexual activist or Antifa member get charged with anything even though the far left thugs punched the preachers repeatedly and destroyed their property. Please pray for these brothers and for our country.

After I left the law office today, I bicycled down Queen Street West and I noted how prolific and open the homosexual propaganda was on the private businesses in Toronto’s west side.

Toronto’s pizza stores have jumped on the queer bandwagon too

Even Soufi’s Syrian Arab restaurant wants to appear pro-LGBT. Note the women in conservative Muslim attire chatting in the window while the business has a sign above the door advertising its self as “676 Queer St. West”

These businesses are a small sampling of the numerous business seeking to identify themselves with LGBT activism in Toronto’s west end. Perhaps as many as a 1/3 of the businesses are openly promoting homosexuality on Queen Street between Bay and Bathurst Streets.

Many Torontotonions claim either there is no God or if they believe in the existance of a god, their god has no relevance to their lives. However, the reality is if someone gets rid of the real God it seems they will replace the real God with something else. The new religion in Toronto as far as I can tell is LGBT. This new god will not satisfy Toronto’s spiritual needs, but in their mad rush to worship at the false god’s altar many lives will be ruined and in the process many fundamental freedoms will be lost.

“Blessed is the one who trusts in the LORD, who does not look to the proud, to those who turn aside to false gods.”
Psalm 40:4

Yes, Canada is Actually Arresting Christian Pastors and Banning Them From Preaching in Public

It is no longer legal to preach the word of Christ on the Canadian streets if others are offended.

A Christian pastor named David Lynn was arrested and charged with disturbing the peace with “derogatory comments” on Tuesday for preaching the word of God on a street corner at Church-Wellesley Village in Toronto, ON.

After the disciple of Christ was harassed by a group of unruly protesters, he was hauled off in handcuffs by law enforcement because preaching the Gospel was considered to be a criminal violation.

The LGBT mob cheered on as the man was dragged away in handcuffs, a sign of things to come if their perverse agenda continues unabated.

A police officer even accosted an individual recording the incident, 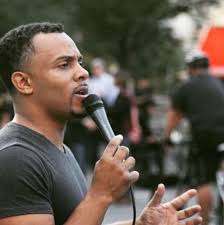 “It’s unfortunate that I am subject to this kind of discrimination and bullying and marginalization simply for saying God loves you, there is hope for you, I accept you and tolerate you. I shouldn’t be in this position, I didn’t do anything illegal,” Lynn said following his arrest. He is now out on bond.

Lynn was shown on the video saying frequently that “God is love,” and that he doesn’t hate anyone. This didn’t stop the police from apprehending him anyway.

“I didn’t know this was the start of the pride month…I didn’t say anything specific to the LGBTQ community, it’s all on live stream,” he said to reporters.

Lynn believes that the LGBT protesters and other hostile anti-Christians throughout his country want him to “stay in the closet” about his Christian beliefs. His arrest will send a chilling effect to others who want to preach the word of Christ in the liberal-dominated country.

“It looked as though they had an event waiting for me, and they had some form of hatred against me,” Lynn said.

Lynn is now banned from being anywhere near the areas of Bloor Street, Yonge Street, Carlton Street and Jarvis Street on conditions of his bond. He is also banned from being near any Pride event, as he is now a second-class citizen in globalist-occupied Canada.

Meanwhile, the legislature is working to expand laws against free speech, with the “Prohibiting Hate-Promoting Demonstrations at Queen’s Park Act, 2019,” being considered by Ontario lawmakers. It would ban any demonstration, rally or other activity that is deemed hateful by the government from being permissible on legislative grounds. If you don’t think that will apply to Christian speech, just ask David Lynn. 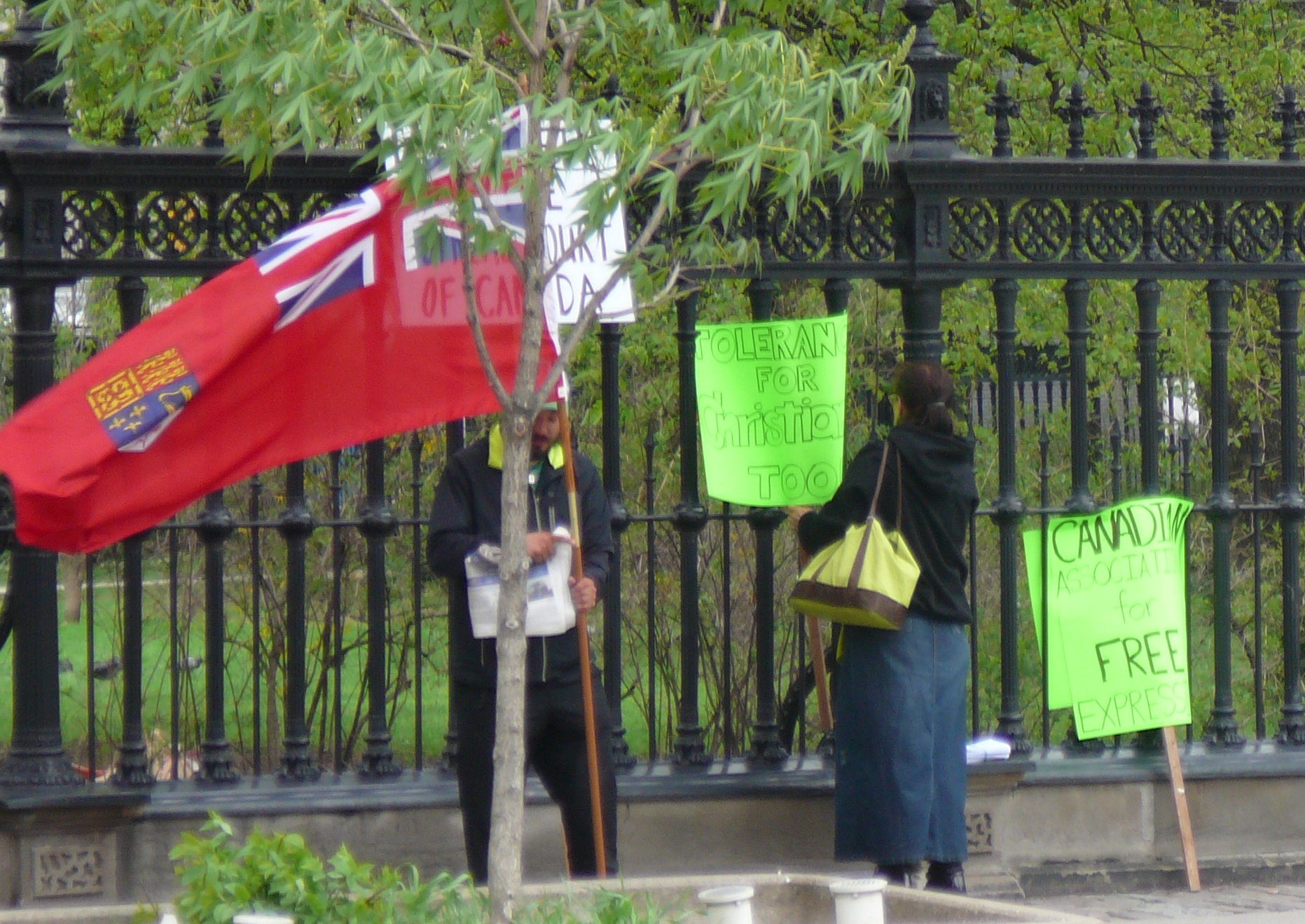 TORONTO. May 16, 2014. About 30 protesters held a noon-time vigil outside the Law Society of Upper Canada in downtown Toronto today. An eclectic group of Christian spokesmen and free speech supporters joined by the Canadian Association for Free Expression denounced a recent decision by the Law Society of Upper Canada (LSUC) to not recognize graduates of the planned Trinity Western University Law School because of their fundamentalist Christian principles.

Trinity Western University is an evangelical Christian college in Langley, BC. It requires faculty and students to pledge to follow traditional Christian morality including refraining from sex outside of marriage. Critics say this pledge discriminates against homosexuals. No one is required to attend Trinity Western University. There is a wide variety of secular alternatives.

The proselytizers of the homosexual agenda who have led a campaign, first to deny graduates of this university the right to teach in B.C.(eventually overturned by the Supreme Court of Canada) and then to deny the planned law school legal accreditation (the move failed) now have pressured provincial law societies in to declare that graduates of the law school will not be granted accreditation. So far, the anti-Christian campaign has succeeded in Nova Scotia and Ontario.

One of the protest leaders Rev. David Lynn, founder of Christian Positive Space (www.christianpositivespace.com) said much of Ontario’s curriculum is “biblephobic.” He noted that well over 70 per cent of Canada is Christian. “We say to the Law Society of Upper Canada: ‘You have to be more tolerant. You are saying Christians do not have the right to practise law in Ontario,. You are anti-Canadian.”

Gary McHale, an activist who led protests against the failure by the Ontario Provincial Police to enforce court injunctions against radical Indians who occupied and still occupy private (now Crown) land in Caledonia, Ontario, noted there was an effort to ban graduates of Trinity Western from teaching in British Columbia. “The case went all the way to the Supreme Court of Canada and they ruled that religious views should not exclude a person from the classroom. Now, the Law Society of Upper Canada wants to exclude Christians from the practise of law.”

The story of Mr. McHale’s battle against politically correct policing — soft on native thugs occupying land in defiance of an injunction, and harsh on White resident merely driving through their own community or trying to counter-protest the occupation — has just been published by Freedom Press (www.freedompress.ca). It is entitled Victory In the No-Go Zone: Winning the Fight Against Two-Tier Policing.

A contingent from FreedomPress, led by President Tristan Emmanuel, also attended the protest.

Bill Whatcott spoke of his campaign to keep radical homosexual material — including discussions of anal sex — excluded from elementary school in Saskatchewan. His leafleting led to human rights complaints, a conviction and a $17,5000 fine. He fought this all the way to the Supreme Court which overturned the Saskatchewan Court of Appeals reversing Mr. Whatcott’s conviction. The Supreme Court , “and shame on them,” Mr. Whatcott said, upheld anti-Christian speech censorship and ruled that truth, intent, sincerely held religious beliefs or political opinions were irrelevant. “It was determined that making statements like this is hate. They acknowledged that although my flyers might be factual, if used for a hateful purpose — and they weren’t — advocating traditional Christian views on sexual behaviour could be censored. I have been left with over $100,000 in legal costs” payable to the Saskatchewan Human Rights Commission.

“The issue here,” he said, “is the decision by the Law Society of Upper Canada to not allow graduates of the planned Trinity Western University Law School to practise in the Province of Ontario. The ironic thing is that Trinity Western has not even opened its law school yet and hasn’t graduated a single student. That is the definition of bigotry — to make a decision before the facts are in. The LSUC is very much under the control of the homosexual lobby. The privileges of homosexual trump the rights of Christians. It’s wrong. And we’re standing here for free speech.”

Click on the picture below for the link to hear Paul Fromm’s remarks.