The rights of Canadians to freely hold and express beliefs are being eroded at an alarming speed under the Trudeau government. Some of its recent decisions even require that Canadians renounce their most deeply held moral convictions and express opinions they disagree with.

In 2018, the Liberal government denied summer job funding to organizations, including charities, that would not sign an attestation supporting abortion. It also passed bill C-16 as part of a trend to force Canadians to express support for the existence of various gender identities beyond the biological categories of male and female, and to use pronouns demanded by those who identify with these other genders.

In addition to these assaults on conscience, the government launched a series of regulatory attacks on free speech on the internet and is pressuring social media companies, which are already censoring speech that isn’t politically correct, to crack down even more. It is also considering bringing back Section 13 of the Canadian Human Rights Act. This hate speech provision was repealed by the Conservative government in 2013 because it was being used arbitrarily to censor statements that offended some people on the internet.

In what appears to be a first step towards restricting our right to criticize some religions, it adopted M-103, a motion that condemns religious discrimination but only specifically mentions one religion, Islam, and without defining the term “islamophobia.”

Finally, on university campuses, a growing number of faculty and administrators—those who should be fighting for open debate of controversial ideas—have become aggressive advocates for censorship.

History and social scientific research show that freedom of conscience and freedom of expression, when maximally protected, advance the intellectual life of a nation, foster greater ideological diversity and societal understanding, and nurture other freedoms necessary for a successful democracy.

This is why Section 2 of the Canadian Charter of Rights and Freedoms guarantees citizens freedom of conscience and religion, as well as freedom of thought, belief, opinion and expression, including freedom of the press and other media of communication.

What some people find politically incorrect, offensive or even hateful cannot serve as the legal basis for discrimination and censorship. Canadians should be able to enjoy maximum freedom of conscience and expression as guaranteed in Section 2 of the Charter.

A People’s Party Government will:

Charlottesville Changed Everything, with Paul Fromm

The Writing on the Wall

The Heritage Committee has started to meet as required by parliamentary M-103. I listened to the first hour of the hearing on September 20th, when Tarek Fatah, a secular Muslim, and Michel Juneau-Katsuya, a former officer in both the RCMP and CSIS, appeared as witnesses.

We have a former federal police officer basically toying with the censoring of the media and the prosecuting of individuals when “things go too far.”

On the other hand, in a subsequent article in the Toronto Sun, Fatah, reflecting on his experience appearing before the Committee, concluded that it was “evident” to him that “this was not a ‘hearing,’ but an exercise to rubber stamp a pre-determined outcome.”

The testimony by Juneau-Katsuya, presumably an “expert” hand-picked by the Liberals, brought to mind a more malignant version of Winston Smith who worked at the Ministry of Truth in Orwell’s dystopian novel, 1984. Winston Smith’s job was to overwrite the truth, replacing the history of what really happened with a revised version. Juneau-Katsuya sketched out an alarm about the supposed rise and threat of a “radical right,” which voice—he said—needs to be silenced. As if our Charter right to free speech should be forfeited because Juneau-Katsuya’s imaginary enemy might…well…do something.

Juneau-Katsuya started his opening 10-minute segment saying, “My comments today…will focus on the rise of the right which, to my mind…represents a greater threat than radical Islam…a greater threat because it creeps into the thoughts of our fellow citizens so much so that it distorts reality and eventually, over time, withstands dispassionate and measured debate” A greater threat to whom, he doesn’t tell us. He contends that the right of free citizens to hold opinions is more dangerous than the death, maiming, and fear created by Islamic radicalism, despite the almost daily accounts of terrorist activities? With this opening statement by Juneau-Katsuya, the revisionism underway is very detectable.

Most of what he said, as in the following examples, makes sense if you invert what he said, for example, substituting the real threat of the “radical left” (like Antifa) and Islamic terrorists, for his imagined “radical right.”

Juneau-Katsuya tells us, “The rise of the right already has many victims and we are pretty close to being on the eve of domestic terrorism far more severe as a threat.” If we take away the “Ministry of Truth” snow job and look at the facts, we see that since 9/11, in the name of Islam, there have been 34,102 attacks worldwide, with 220,173 killed and 301,002 injured across some 59 countries, as of October 2, 2017, that we can confirm.

Juneau-Katsuya continues, “…the discourse of the English-speaking extreme right in western Canada is much closer to that of neo-Nazis and so-called conventional white supremacists.” Here, he regurgitates the leftist mainstream media narrative and misrepresents the National Socialist German Worker’s Party (Nazi) as being on the “extreme right” when they were actually on the “extreme left” (socialists) along with their communist cousins.

His misrepresentation of truth continues with, “I deplore the current lack of leadership and concrete measures by our political leaders, from all parties and orders of government, to offer a counter-discourse to the allegations and outright lies perpetuated by agitators on the right.” The lie that “Islam is a religion of peace” is easily ignored along with the various terrorist activities having no connection whatsoever to Islam.

Juneau-Katsuya’s rejection of our freedom of speech continues with, “While respecting the right to free speech, perhaps it is time to examine the degree of acceptability of the aberrations of certain opinion leaders or agitators.” He was very short on specifics throughout his presentation, but he gave some hints as to how he would propose drawing the line, for example, suggesting that the licenses be withdrawn for “trash radio” stations in Quebec, whose viewpoint he considers as being responsible for the attack on the mosque in Quebec City. As well, when asked by a Liberal committee member, “On the Anglophone side, would you perceive Rebel Media (an online news and commentary source offering the ‘the other side of the story’ from a conservative perspective) to be amplifying the message of the extreme right?,” Juneau-Katsuya unhesitatingly answered, “Absolutely.”

Unfortunately, there was no push back from the Conservative MPs present with respect to this fanciful storytelling with its implications of totalitarian overreach on free speech. Liberal MP Arif Virani (himself a Muslim) bluntly told Tarek Fatah, who also addressed the committee, “I disagree with virtually everything you’ve said in your opening discourse and response to questions,” which is what the Conservative MPs should have told Juneau-Katsuya. Virani when he cited the example of an innocuous tweet, by Fatah (again a secular Muslim), related to the attack on the mosque in Quebec City without referencing its author as being Fatah. Chillingly, Juneau-Katsuya declared that the author of such a tweet should be “denounced and if possible prosecuted.”

In just these few examples, we can see how the Liberals are choreographing the desired outcome of these hearings.It appears (ominously) that “the writing is on the wall.”

CHP Canada is the only federal political party willing to stand against these encroachments on our freedoms. If you are concerned then it’s time to join your voice with ours by becoming a member and supporting the Christian Heritage Party. The time to fight is short…join today! 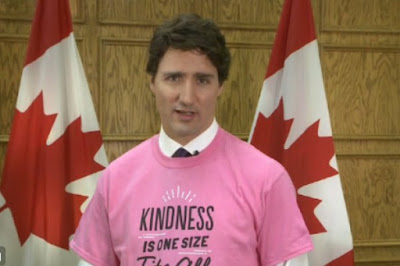 Finally the Mystery is solved.

Having watched PM Boy Wonder in office for almost two years now, many of us wonder why, oh why….

He swallows the entire LGBTQwerty agenda, without drawing the line at Ontario bill 89? A bill which, should it become law, could allow social workers to remove children from parents who reject transgender ideology.

Why he doesn’t criticize the University of Toronto for harassing Professor Jordan Peterson for standing up for Standard English and male/female pronouns?

Why he doesn’t threaten to cut funding to universities which will not guarantee free speech on campus or ensure that professors are not shouted down in the classroom?

Why he didn’t stand up for free speech and withdraw Motion 103 which if translated into law, will make criticism of an ideology — Islam — illegal?

Why, while attending a Mosque, didn’t he tell the imam that sharia law in regards to the rights of women, apostates and gays was antithetical to Canadian values?

Why didn’t he deploy officers, and if need be, soldiers, to border crossings where illegal migrants were pouring in?

Why didn’t he make a clear statement that he will protect and assert Canada’s sovereignty and secure the borders?

Why didn’t he say that covering one’s face at a citizenship ceremony or in any official, public event was unacceptable and counter to Canadian values? Why doesn’t draw the line at wearing niqabs?

Well, finally we have our answer. The mystery is solved: 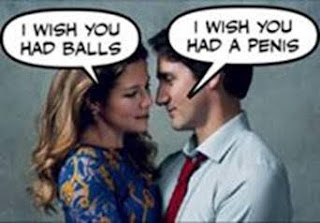