The end game is here,

But it is NO game.

Now life will never be the same.

Kept giving up your rights,

Never stood up to fight.

The enemy will not just retreat

You reap what you sew,

Now the Grim Reaper is closer than you know.

The agenda of Satan

Is masquerading as our salvation.

Freedom will never again see the light of day.

And it’s the real deal.

But you remained apathetic,

Now how do you feel?

It comes at a price.

But you didn’t want to pay,

So get ready to live on your knee.

Keep paying for your poisoning,

Keep believing all the lies.

It should come as no surprise.

Even if you finally wake up tomorrow

To realize the wool’s been pulled over your eyes,

So accept your demise.

Has lead to your defeat.

There is no turning back

Humankind has been hacked.

MISSISSAUGA, July 24, 2019. Before an enthusiastic crowd that frequently leapt to its feet applauding, Salim Mansur delivered a ringing defence of free speech as he introduced People’s Party of Canada leader Maxime Bernier who unveiled his party’s immigration programme.

“Free speech in the mother of all freedoms,” the retired associate professor of Political Science at the University of Western Ontario thundered. “There is a crisis of courage in Ottawa,” the author of several books critical of radical Islam argued. 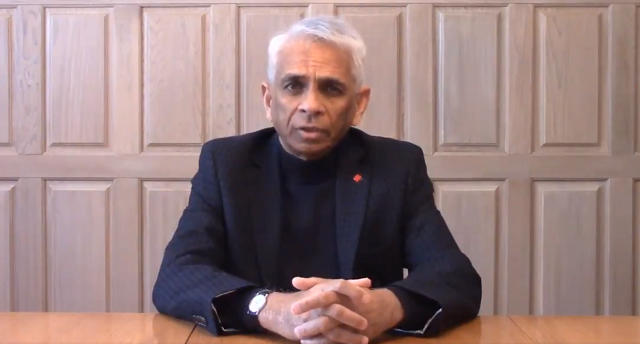 “Until a few weeks ago, I was the Conservative candidate for London North Centre. On June 10, I was informed that the party leadership had disallowed my candidacy. There were no reasons given. There was no hearing. Apparently, the party leadership viewed me as a liability because of my criticism if Islamism. My candidacy was disallowed due to political correctness.” The first person to call offering his support was Maxime Bernier, an old friend, who promptly asked him to be the People’s Party of Canada candidate in London North Centre.

“Our political system has turned into an  empty shell full of politically correct slogans,” he said. Today, the views of Sir John A. Macdonald, Sir Wilfrid Laurier, Louis St. Laurent and John Diefenbaker are disallowed  as politically incorrect by our leaders. “We will not accept these measures by those who would censor us, Freedom of speech is the foundation of our liberal democratic society. Under Maxime Bernier’s leadership, freedom of speech will be the first order of business.”

A practising Moslem himself, Professor Mansur warned that, in efforts to appease the Muslim Brotherhood, Justin Trudeau seeks to censor any criticism of Islamism. Globalism and Islamism are like Siamese twins. Islamism is dedicated to imposing sharia law. Globalism is the ideology emanating from the UN and the European Union.” If globalism and Islamism prevail over our Canadian national identity, “we will be ruled by shadowy unelected ideologues in New York, Brussels and Geneva.”

Furthermore, he warned: “We cannot discuss immigration or national security, if we cannot discuss Islamism.” Concluding to wild applause, Professor Mansur said: “The People’s Party of Canada is the only party to resolutely oppose globalism and Islamism and the UN-driven globalist agenda.”