Lately, the media has give a lot of attention to a group of people that’s referred to as “social conservatives”.

From my observation, the media classifies social conservatives as anyone who is any or all of the following: pro-life, pro-parental rights, pro-free speech, a feminist not in agreement with gender theory- or a “TERF” (trans-exclusionary radical feminist), anyone who is pro-traditional marriage (but could be OK with gay civil unions), opposed to legal marijuana, anti-euthanasia, opposed to gender theory, or for religious liberty.

Whether this term is a applied by the Toronto Star, CBC, the Toronto Sun or even the National Post, there’s always a certain sneer or negative connotation with this group.

Why? Why does the media label and dismiss out of hand, anyone with a difference of opinion from themselves, or Justin Trudeau, or the Liberals.

Since when has our country’s democracy been flattened so that there can be no difference of opinion on any issue, especially the social ones?

Why is is that Liberals speak of diversity as being a strength? And yet many Conservatives dismiss, what they view, as the inconvenient diversity of opinion within our party.

Look no further than many of the so-called “leading contenders” within the CPC leadership race who are as diverse from the Liberals as a loaf of Wonderbread; every slice is the same- mushy middle, crusty ends.

The solution for the Conservative party- or Canada- is not to replace Justin Trudeau with another slice from the loaf.

Us Conservatives need a leader who will embrace true diversity of opinion and protect our freedoms. It’s called democracy- not a one-party state.

Louis = Marika, in the next or the next several months, I will offer commentary and on various issues as they arise in this leadership. I also commit to you, to continue meeting with candidates as they reach out to me (several already have) and ask them important questions on policy, freedom, and democracy.

Hard questions need to be asked. I intend to ask them.

I Supported & Probably Still Do Support Tanya Granic Allen for PC Leader of Ontario
On Friday, February 23, I received this invitation from Tanya Granic Allen, a Grey County-based social conservative who has denounced the Red Tory policies of ex-leader Patrick Brown: specifically, his support for an offensive sex-ed curriculum at least partially designed by a man since convicted of possessing kiddie porn (and once a close advisor to then-Education Minister Kathleen Wynn); his support for a punishing carbon tax based on junk science; his support for  the police state anti-free speech bubble zones around abortion clinics and abortion practitioners., She was aggressive and articulate and did well on the February 15, TVOntario debate.
So, when I received this request, I tweeted my endorsement and mailed her off a cheque for $100!

“PC” stands for “politically correct” and is suggestive of a sort of censorship that currently afflicts the western world.

By coincidence, P.C. are also the initials for Progressive Conservative, the name of the largest “conservative” political party in Ontario.

One of my main reasons for running to be the PC Party leader is my opposition to “PC” as political correctness. And my inspiration for the fight against “PC” politically correct censorship is Ontario’s very own Jordan Peterson.

Although he is a tenured professor at the University of Toronto, Jordan Peterson knows about grassroots Canadians. He grew up in a farming community. And he hasn’t abandoned his commitments to common sense and plain-speaking.

And thank goodness for Lindsay Shepherd, a 24-year-old Wilfrid Laurier University grad student. Lindsay Shepherd was taken to task by the university administration for playing a recording of Jordan Peterson’s talking good, common sense about culture, families and human nature.

But on our university campuses and too often in the broader culture, good common sense about culture, families, and human nature is all too UNCOMMON.

Our universities – once bastions of free speech in Western society – have become dens of political correctness. Dens in which anyone who speaks principled, common sense is thrown to the lions!

Jordan Peterson and Lindsay Shepherd are bona fide, Ontario free speech heroes. They inspire me to speak plainly on behalf of families, children, and seniors, against the flood of warped cultural madness.

That is why in the TVO debate I spoke very plainly without dancing around the truth.

That is why as PC Leader I will tell you the unvarnished truth, and hold to common sense commitments about human nature, families and culture.

I want to be the PC Party leader who will oppose “PC” (politically correct) censorship.

That is why as a PC Party Premier I will bring implement policies in support of these commitments.

And that is why I need your support and your vote in this leadership election.

Conservative. For a Change,

Then, this misleading blast appeared and the Toronto Star (February 25, 2018) did a story and got no comment from the Granic Allen campaign. That was the right approach. Candidates aer in the business of trying to win over support and voters. It hardly makes sense to turn away a supporter. As to campaign policy, that’s for Mrs. Granic-Allen to speak to. I never pretended to suggest I spoke for her campaign. 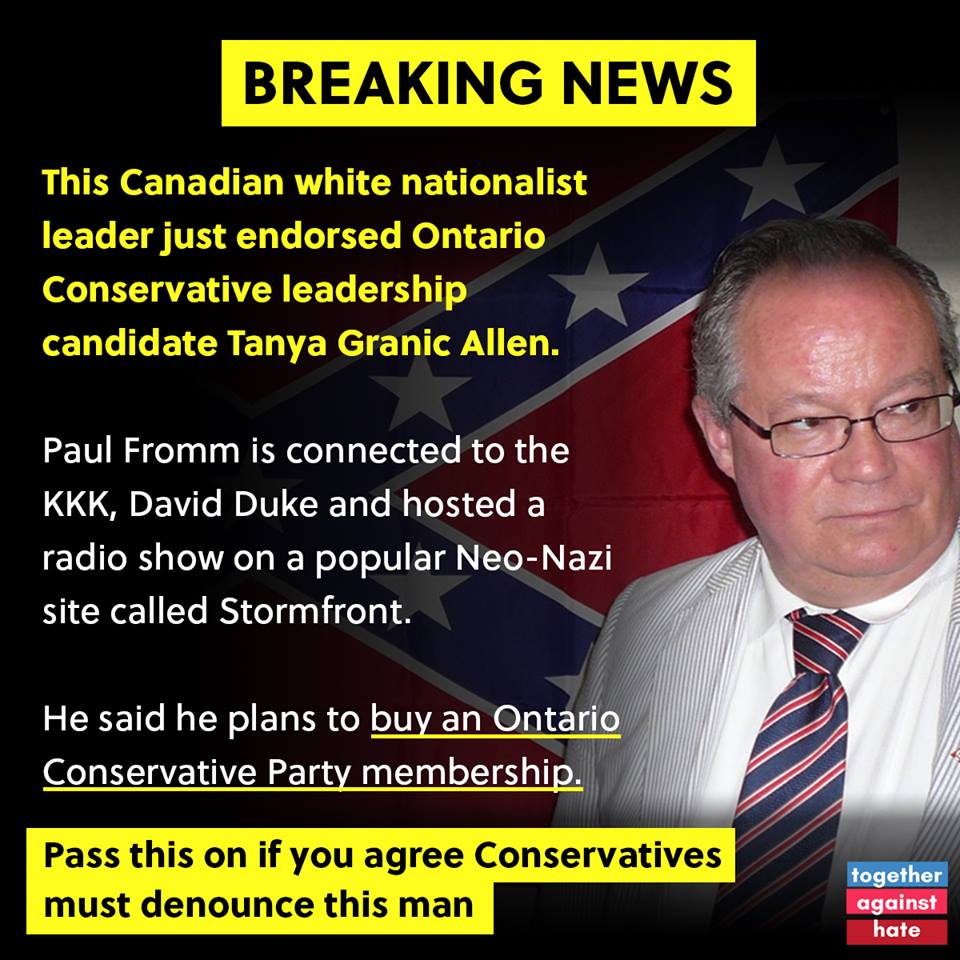 Just to set the record straight, the Klan hasn’t existed in Canada for over a decade. In its ups and downs in the late 70’s, 80s, and 90s, I never joined the Klan, was asked to join the Klan or wanted to join the Klan in Canada. As for Representative Dr. David Duke, who is a dear and longtime friend of mine, he hasn’t been in the Klan since he was 23 — well over 40 years ago!

So, White nationalism — putting the European founding/settler people of Canada first — is racist and wrong. What does that make Zionism — putting Israel first? Anti-racist actually means putting OTHERS first. Her father Brian Mulroney was a big Zionist. He played a big role in continuing the massive Third World demography-changing immigration policies followed by his Liberal predecessor Pierre Trudeau. I’m not surprised she opposes White nationalism. What a constipated view! Mulroney doesn’t even want me to vote or be a member of the party.
Here one might have hoped for some of the leadership Tanya had promised — standing up against political correctness and censorship.
But, no! On Sunday, her campaign veered into full panic mode. She did not call me to inquire if the smear from a rabid anti-free speech, far leftist group which would NEVER support her was correct. Instead, she tweeted out a near hysterical denunciation: 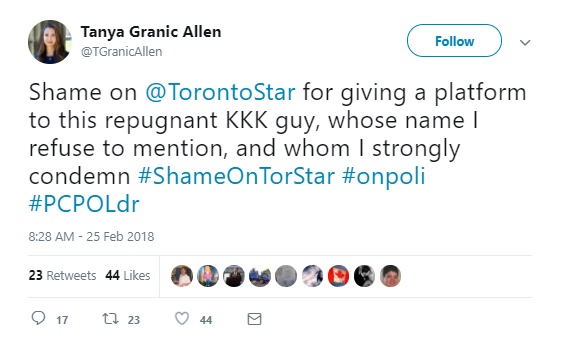 Actually, as already explained. I’m not a “KKK guy” and she was panicked into denouncing someone her campaign had approached for support and who had never been given a chance to refute the lies of the anti-White left. Her behaviour was disturbingly “politically correct”.
Well, I still have a soft spot for her and hope she can learn from Donald Trump who never succuumbed during the campaign to the mugs game of denouncing his own supporters.
By JACQUES GALLANTLegal Affairs Reporter

Tanya Granic Allen’s campaign to be leader of the Progressive Conservatives has received the endorsement of a self-proclaimed white nationalist.

Fromm is director of the Canadian Association for Free Expression, which is “dedicated to free speech, immigration reform, and restoring political sanity,” according to its website.

Your 5 Ontario PC leadership candidates: A Ford, a Mulroney, an unknown, the former leader and the favourite

Fromm’s teaching licence in Peel region was revoked in 2007 due to his participation in white supremacist groups and events.

“All of us have a right to participate in the political process,” Fromm told the Star, and said he’s looking to become a member of the PC party.

“I admire someone who comes more or less from the outside, who has taken a strong stand.”

He said the PCs under Patrick Brown “have strayed far, far, far from the feelings of many people in the grassroots,” mentioning among other things the support for “that ridiculous sex-ed program, which I think is offensive to all sorts of people,” referring to the Liberal government’s revamped sexual education curriculum introduced in 2015.

Granic Allen, a social conservative, has been outspoken in her opposition to the new curriculum. Her campaign did not return the Star’s request for comment Saturday regarding Fromm’s support.

The PCs will announce their new leader on March 10.