Demonstration against Maxime Bernier and the Far-Right

Maxime Bernier, the leader of the far-right People’s Party of Canada, will be hosting a rally to gain support for his election. Bernier’s colonial, transphobic, nationalist, and anti-environmentalist rhetoric has called fascists from across Canada toward his party. Members of the Proud Boys, the Soldiers of Odin, and even Vancouver’s local neo-Nazi, Brian Ruhe, have all pledged their support to the PPC and are attempting to use the party as a Trojan horse for their own fascistic agendas.

The Hellenic Community of Vancouver will be hosting this event at their location. Back in March they were planning on hosting two white supremacists, Stefan Molyneux and Lauren Southern until the backlash they faced from the community forced them to cancel. They clearly did not learn anything from the last time because now they are back at it again. If it makes you mad that the Hellenic Community of Vancouver is hosting another far-right event on their property we encourage you to get in contact with them directly and voice your anger.

Let the Hellenic Community of Vancouver know we will not allow them to bring the far-right into our communities!

A public talk by two controversial Canadians accused of hate speech has been cancelled after Auckland’s mayor Phil Goff banned them from all council venues. Lauren Southern and Stefan Molyneux, who are best known for their far-right alternative views on everything from feminism, gender and immigration to Islam, were set to perform at the Bruce Mason Centre on 3 August.

However, Auckland Mayor Phil Goff tweeted that venues should not be used to stir up ethnic or religious tensions and that Ms Southern and Mr Molyneux would not be speaking at any council venues.

Auckland Live which runs the centre as well as the Auckland Town Hall, Aotea Centre and Civic Centre, tweeted the event had been cancelled because of security concerns. 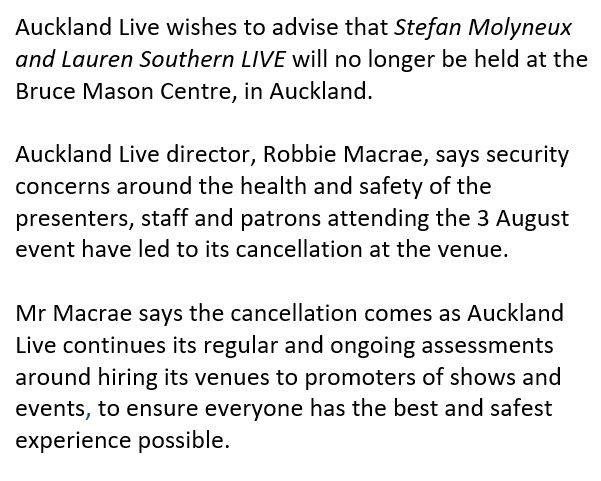 The event organiser said the decision was disappointing and a blow for democracy.

David Pellowe from Axoimatic said Mr Goff had the wrong idea about what the pair wanted to talk about.

“It’s very sad for democracy and for debate.”

‘It doesn’t mean that we should ban them’

However, human rights criminal law barrister Craig Tuck said the pair should be allowed to come to New Zealand and talk about their ideas.

“There’s a lot of their sort of talk worldwide at the moment and that’s attracting debate, people are getting educated on the issues and that’s probably a good thing.

“This sort of discussion is alive whether we like it or not.”

Mr Tuck said dangerous ideas were not the same as dangerous people.

“They’re undeniably racist but it doesn’t mean that we should ban them.”

He said debate needed to happen in an educated and thoughtful way.

Mr Pellowe said it was too late to try and organise a new venue but they hoped to still host a evening with Ms Southern and Mr Molyneuax for New Zealanders via the internet.

He said those who had purchased tickets for the event at the Bruce Mason Centre would get a full refund.

Earlier this year, Ms Southern was banned from entering the UK on the grounds of her involvement “in the distribution of racist material in Luton”, according to the BBC.

‘She’s just going to insult all of us’

The Islamic community voiced their opposition to the visit last month.

New Zealand Federation of Islam Associations president Hazim Arafeh said it had written letters to the Immigration Minister, Minister for Ethnic Communities and the Human Rights Commission asking for Lauren Southern to be denied entry.

“I don’t think insulting Muslims comes under free speech, that’s an abuse of freedom of speech.

A petition with more than 1500 signatures has also been launched on change.org appealing to the Immigration Minister to deny Lauren Southern entry.

However, Ms Southern, who is a journalist, activist and film-maker, said she should be allowed in.

“As soon as there are people who want to shut down free speech and freedom to come and even visit your nation just because of a differing opinion you can tell you’ve got the bug of progressivism,” Ms Southern said.

“The bug of this almost very totalitarian left-wing ideology which will not end well for you.”

She said herself and Mr Molyneux would talk about a range of issues affecting New Zealand.

“Immigration, western culture, the preservation of western culture and largely the infectious liberal or far-left ideologies that are coming and working their way into our media and why they will lead to the economic, social and political fall of our nations.”

Ms Southern said what she had to say was not hate speech.

“[Hate speech] is just a fancy word to describe speech that is unpopular during that day and age,” she said.

“They’re part of a broad coalition of people who at their soft end would be pro-Trump but at the hard end – which I regard both of these being – very white supremacist or believe in the racial superiority of white people, they believe that immigration undermines countries.

Mr Spoonley said there was an alt-right community within New Zealand but it was small.

He said banning people entry to New Zealand would need to meet a high threshold and the decision warranted a public discussion.

An Immigration New Zealand spokesperson said they were aware of the two Canadian nationals and was assessing whether any action needed to be taken under the Immigration Act and Immigration Instructions.

Mr Molyneux heads the organisation Freedomain Radio, an online group that was described as a cult.