His appeal of his 2019 conviction was denied in a June 14 ruling. The editor of the satirical tabloid YOUR WAR NEWS immediately sought leave from the Ontario Court of Appeals and bail, pending the appeal. He was finally able to get word to his supporters today. A combination of COVID fearfulness and the sclerotic nature of Ontario’s justice system at the best of times has kept the brilliant writer and medical doctor behind prison bars.

A judge will render his decision by Zoom. The judge must read over the materials filed and decide whether there is any merit to his application for leave. If he decides there is, Dr. Sears will be released on bail.

He is in good spirits and is hopeful.

Amnesty International considers a person a “prisoner of conscience” or political prisoner if they are punished or jailed solely for the non-violent expression of their political, religious or cultural views.

Savage Sentence Handed Out to Dr. James Sears for Satire

TORONTO. August 22, 2019. Today Provincial Court Judge Richard Blouin blew it. He had the chance to declare a mistrial for outrageously ineffective representation but instead chose to sentence Dr. James Sears, editor of the satirical YOUR WARD NEWS to the maximum — a year in prison, six months each consecutive on two counts of wilfully promoting hate against privileged minorities — Jews and Women.
Despite evidence in e-mail exchanges that lawyer Dean Embry had refused Dr. Sears instruction to call expert witnesses and to make certain submissions, the judge, sticking by a fellow lawyer declared:   ” “Mr. Embry approached the case tactically and professionally. This was not incompetence or worse. This was a lawyer doing his job. It just didn’t work.” 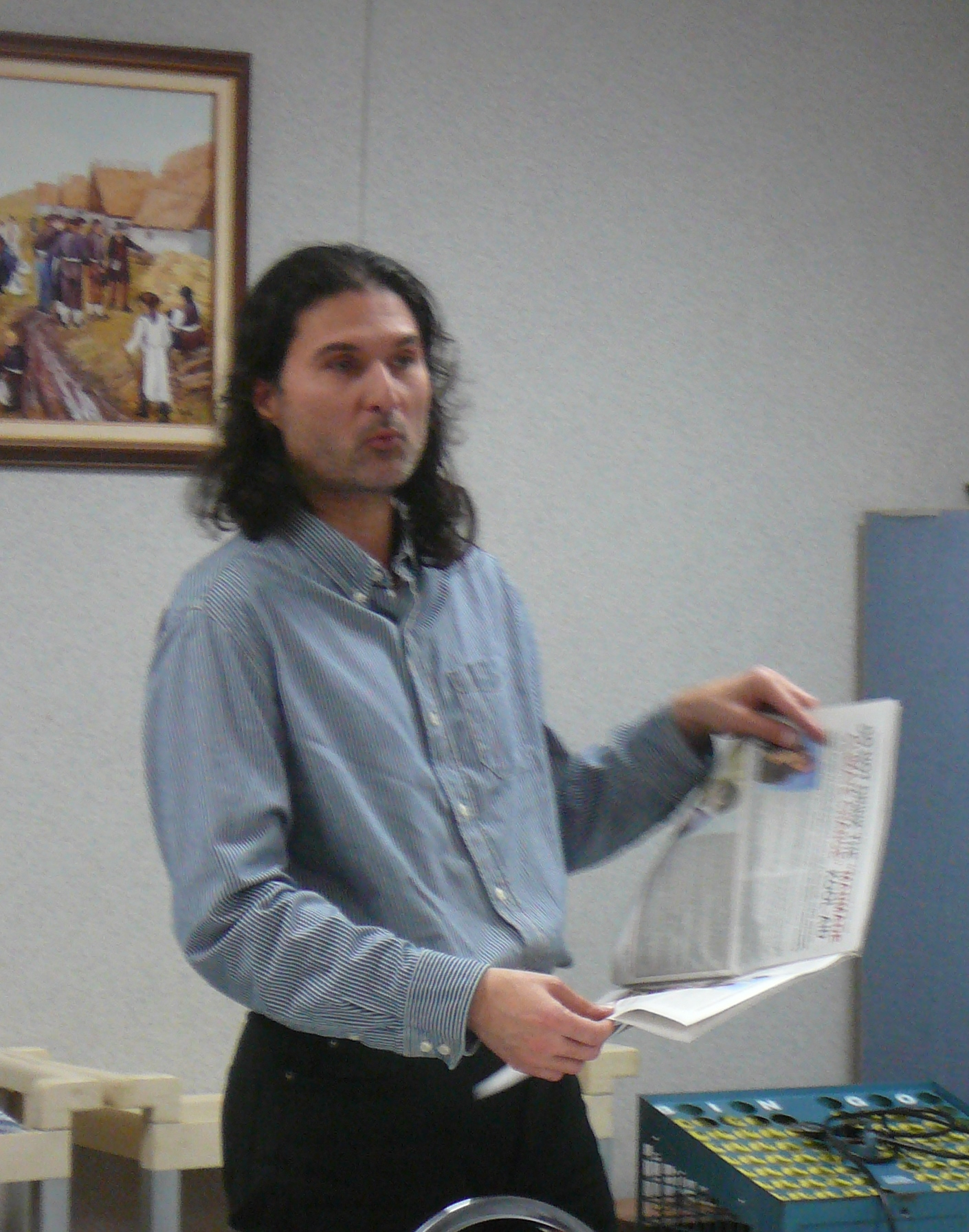 The judge then got down to sentencing. He declared that Dr. Sears deserved at least 18 months. A conviction attracts only a maximum of six months. Agreeing to the Crown’s demands for the maximum sentence of six months on each count to be served concurrently, the judge gave Dr. Sears a year.
The judge faithfully echoed a line spread by Canada’s Jewish lobby that criticism of Jews leads to violence:  ” “Mr. Sears  promoted hate to a vast audience in an era where online exposure to this material inexorably leads to extremism and the potential of mass casualties.” Oddly, in press reports, Noah Shack of the Centre for Israel and Jewish Affairs said much the same thing:  “Those who promote hatred must be held accountable. What starts with words can often lead to violence.” At an earlier sentencing hearing, Dr. Sears had submitted evidence that YOUR WARD NEWS‘s satire serves as a safety valve and offers a voice to many people marginalized by political correctness. he cited two examples of people who had threatened violence but who had calmed down once their stories appeared in YOUR WARD NEWS.

Dr, Sears wife Colette and his four year old son attended the sentencing. The boy saw his father handcuffed and led away. Dr. Sears gave his wife his car keys and cellphone and insisted on keeping his chain and crucifix as he headed to the cells.
A woman supported called out: “This is not right.” The judge threatened to have her removed. The woman, who grew up in communist Eastern Europe, left the court in tears with memories of exactly the same things in her homeland.
In a press scrum afterwards, Paul Fromm, Director of the Canadian Association for Free Expression, warned an extremely hostile reporter: “This is a sad day for freedom of speech and freedom of the press. This is North Korea lite. CAFE has supported YOUR WARD NEWS all along in its fight for freedom. Neither the Crown nor the judge could see that this paper was satirical. My parents if alive today would have wondered what they risked their youth for. My father served three and a half years in the Royal Canadian Navy; my mother six years as a nurse in the Canadian Army. They thought they were fighting for freedom and against people who jailed writers and threw people in prison for the non-violent expression of their religious or political views.”
“Dr. Sears is a Christian martyr,” another supporter said.
​

Publisher Leroy St. Germaine will be sentenced August 29. A proud Metis, he was entitled to the Aboriginal discount, or special reduction of sentences in view of his ethnicity. At a previous hearing the judge urged him to accept mediation — a sitdown with Jews and women who had complained against YOUR WARD NEWS. “Fuck that,” he told his lawyer.
So, August 29 will show whether our cultural Marxist courts will send a proud, ailing 77-year old Metis to prison for the non-violent publication of his political and religious views.

A notice of appeal against the conviction was filed earlier this week. Another lawyer will appear in Provincial Court on Friday to seek Dr. Sears release on bail pending appeal.
YOUR WARD NEWS “HATE” TRIAL BEGINS IN TORONTO
TORONTO. November 28, 2018. The trial of YOUR WARD NEWS editor Dr. James Sears and publisher Leroy St. Germaine on charges under Canada’s notorious “hate law”, Section 319 of the Criminal Code opened this morning in Toronto before Judge Richard Blouin. The two newspapermen are charged with wilfully promoting “hate” against two privileged groups; namely, Jews and women. Sec. 319 charges are very seldom laid and, as Paul Fromm, Director of the Canadian Association for Free Expression which is supporting Dr. Sears and Mr. St. Germaine, pointed out to a CBC reporter, they are only ever laid against Christians or people on the right side of the political spectrum
Crown Attorney Robin Flumerfelt  offered an overview of the case with a vehement denunciation of  the political views of the zany satirical YOUR WARD NEWS. “The paper also contains repeated claims of a worldwide, blood-thirsty Jewish conspiracy, court heard. Imagery, for example, depicts Jews as devils with serpent tongues and reptilian hands. Among its themes, the prosecution said, was that Jews were behind the 9/11 terrorist attacks, the Holocaust was a myth invented by Jews to strengthen their control of the world, and the glorification of Adolf Hitler and the Nazis. ‘These are examples of the communications that the defendants made available to hundreds of thousands of homes without being asked,’ Flumerfelt said, calling their actions an ‘overwhelming breach’ of the Criminal Code,” the Toronto Star (November 28, 2018) reported.
The rest of the day was taken up with the testimony of Professor Derek Penslar, who teaches Jewish history at Harvard University. His report found that YOUR WARD NEWS is anti-semitic and expresses admiration for Adolf Hitler. True, YOUR WARD NEWS is critical of Zionist power and certain conspiratorial people like George Soros, who are Jewish and, true, that it does speak sympathetically of Adolf Hitler, but the legal question is whether its satirical views and cartoons, meant to burst the bubbles of the pompous, wilfully promote “hatred” or action. Penslar ticked off a number of historical events involving Jews including their major role in the creation of communism and the perpetration of mass crimes and murders under Soviet communism and the role of crypto-Jews, not Moslems, in the genocide of over a million Armenians in Turkey in World War I. He didn’t directly say that these accusations were false. The offence seems to be accusing groups of Jews or even individual Jews like the Rothschilds or Soros of bad things.
​

During cross-examination by defence lawyer Dean Embry pointed out: “Nowhere in YOUR WARD NEWS does it say that all Jews were responsible for the murder of 50,000,000 Christians in the former Soviet Union.”

Saying that Jews behave as an “entitled” group is anti-semitic, he insisted. As well, he stated: “I don’t believe claims of the deeds or the Rothschild Bank have any basis in reality.” Moreover, “George Soros supports liberal causes financially” in his view. He was emphatic: “The holocaust happened” and “Fred Luchter is a fraud.” Mr. Leuchter was an expert in execution devices used in U.S. prisons. Ernst Zundel commissioned him to visit Auschwitz surreptitiously and examine the alleged gas chambers. His Leuchter Report found no chemical or forensic evidence of mass extermination.
YOUR WARD NEWS frequently states that it doesn’t hate Jews but wants them to be saved by embracing Jesus. For instance, as Mr. Embry pointed out to Professor Penslar YOUR WARD NEWS states that today’s Jews cannot be blamed for the involvement of some of their ancestors in the slave trade. “You can find Christian love in YOUR WARD NEWS.”
The Crown’s expert witness disagreed: “I read such statements as attempts at self-exculpation.”
He called YOUR WARD NEWS “very 21st century. The multi-coloured cartoons” are engaging and there is a lot going on in the conversation bubbles.
Court proceedings were briefly interrupted at exactly 12:00 noon, when a portly Robert James, a former YOUR WARD NEWS employee, leaped up and shouted: “Get these two assholes out of here. Get the Mossad to take them out!” referring to the defendants. James has been struggling with personal demons for over a year and has charged that Dr. Sears is an agent of Vladimir Putin. He is charged with making threats against Dr. Sears and his family and doing over $10,000 in damage vandalizing Dr. Sears car. He is under bail conditions to avoid all contact with Dr. Sears. At one point he was supposed to be called as a Crown witness. A police officer escorted him from the room.
Judge Blouin immediately reacted: “I issue an Order that Robert James is banned from the courtroom.” He warned that any such disruptions of court decorum would not be tolerated.

the anti-free speech Toronto Anti-Hate Network put out a Facebook alert to supporters. However, experienced courtroom observers saw no members of the AHN or of several Zionist lobby groups that pressured for these charges to be laid.