* Videographer; former political prisoner in Germany (10 months for her video, Sorry, Mom, I Was Wrong About the holocaust) 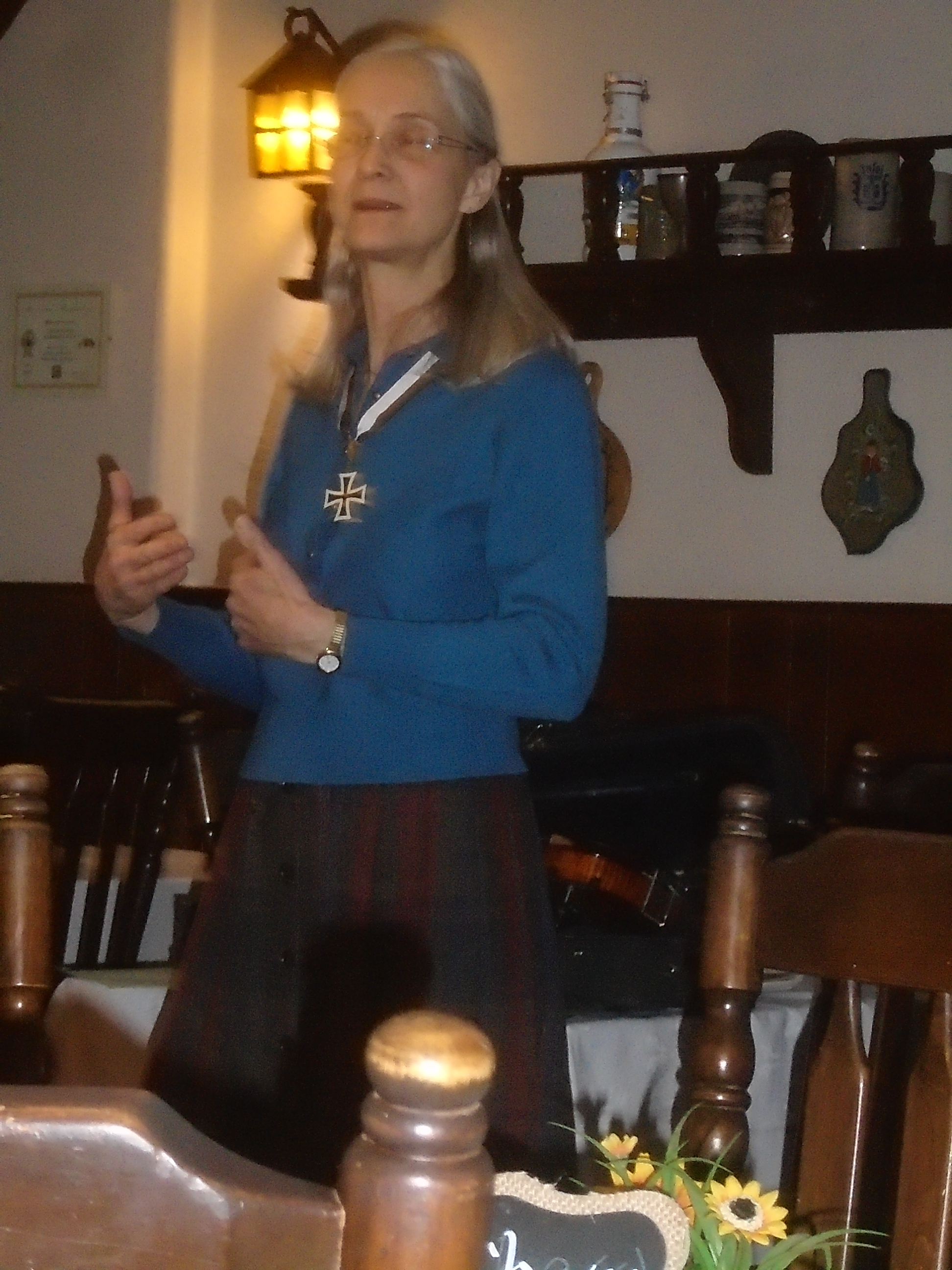 Ever since bringing out her powerful video, Sorry, Mom, I Was Wrong About the Holocaust (in English and German), Jasper Alberta  violin teacher and musician Monika Schaefer has been the victim of a brutal campaign of shunning. She was banned from the local Legion, a frequent venue for musicians in a small town. She was refused a busking permit last year because her ideas were “not inclusive”. All of this virtue signalling is punishment for her dissident views.

Monika frequently volunteered her musical skills free of charge for benefits,. She is a friendly woman deeply involved in environmental and social causes.

Now, she has been told by the Yellowhead regional Arts festival Society not to attend. the pompous prigs proclaim that they “promote a safe learning environment” and that her presence “at our event would not be the correct fit.”

The insolence of this shunning is shocking. Monika would be paying for her own gas and donating her time and talent free of charge as she has many times for the same festival. The suggestion that the gentle Monika playing her violin would endanger someone’s safety is grotesque! Or do they really mean that her ideas challenge the mental straitjacket that constricts the minds of some in the community?

After careful consideration the board thinks that your presence at our event would not be the correct fit for our organization at this time. [highlight emphases mine]

We wish you all the best with your future musical endeavours.

Please explain to me exactly how my presence would not be the correct fit for your organization. Are you implying that my presence with my violin on the stage in Hinton would somehow be dangerous to the audience members? Are you suggesting that I might lose control of my violin bow and poke someone in the eye?

I wonder if your fear stems from any of the numerous fundraisers in the past at which I have donated my time and music (and gas) for the benefit of the Yellowhead Rotary Arts Festival (as it used to be called). What safety concerns were there when so many of my violin students entered the festival in past years, thereby helping to make the festival viable?

Why are you hiding behind the anonymity of “YRAF Society Board”? Who is pressuring you to make such a decision? Who among your board is doing this? What are your names please? And did you tell my fellow musicians with whom I was to perform that they, by association, are also not the “correct fit”?

Your letter smacks of Orwellian Double-Speak, “…promotes a safe learning environment…”. The level of cowardice in shrouding your identity is astounding.

The people on my extensive bcc list will be very interested in your explanation of why I should not be allowed to volunteer my time and modest talent at your fundraiser show on September 29th, 2017, for which I was willing to spend my money to get there, all for your Society’s benefit.

I await your early response.

Jasper, in the Yellowhead Region

It is the one year anniversary since I went through a door. I was very well aware that once through this door, there was no going back. My life changed on June 17th, 2016, with the release of the “Sorry Mom, I was wrong about the Holocaust” video, followed a few days later with the German edition “Entschuldigung Mama, ich hatte Unrecht was den Holocaust betrifft”.

Though I had a sense of a serious transition in my life, I really had no idea what would follow. The intensity of reaction, both positive and negative, took my breath away. The video was translated with subtitles into 3 languages within the first 4 days. Spanish, swedish and french. A transcript was made. The view count shot up. Within a month there were 60,000 views, and currently it has over 133,000 views on one channel alone only in English.

Apparently the video struck a chord. Who would have guessed it would resonate with so many people? Many have had similar experiences as I did – reproaching or resenting their parents for being part of a generation of monsters, only to find out that everything had been turned on its head. For those who reached similar conclusions as I had reached after much research, there was deep gratitude, relief and appreciation for the simple message in my video.

For those still stuck in the matrix of lies, the video came as a shock and surprise. For those whose identity and interests were threatened, I became a grave threat and was pronounced the enemy. I learned all about Ritual Defamation in a town which boasts tolerance, inclusiveness, and “embraces diversity”.

Victims of ritual defamation become ostracized, shunned, humiliated, and isolated. An attempt is made to destroy the victim economically as well as socially. Mental poison is injected into the community, and it infects many well-meaning people.

Organizations and political parties stepped over each other to make a public show of expelling me. The Alberta Society of Fiddlers, the Jasper Environmental Association, the Alberta Green Party, the Green Party of Canada, all gave me the boot, and put it loudly into the record. The media dutifully reported, using weaponized words to trigger the programs that had been drip-fed into people’s brains to react in a predictable manner. “Neo-nazi holocaust denying hater!” What do those words actually mean? Nothing!

I wonder how many of my former friends took even twenty minutes, or perhaps three hours of their lives to view one or two or all three of the recommended videos at the end of my 6 minute video, before throwing away our friendship. Why would they not want to look into why I was making controversial statements which went contrary to everything we have been told all our lives about “the holocaust”? Do they really believe that I had suddenly lost my mind? Or were they afraid of what they might learn?

Many have told me outright that they will not discuss this topic, they refuse to look at it, refuse to debate it, refuse to question anything about it which would run contrary to what we have been told all our lives. It seems clear to me that this refusal to even look is the result of the psychological warfare that has been conducted against us. Do the weaponized words frighten us into submission? Does it make sense to ostrasize and shun a dissenter while refusing to look into the subject?

Why would there need to be laws to defend their holocaust if it really happened? They could show the evidence instead. Only lies need to be protected by laws. If the event was so rock-solid like they always tell us it is, they would not fear investigation. To me, the existence of laws against questioning “the holocaust” is enough to tell me there is something wrong with the story. I can never understand the mentality of people who tell me “you see Monika, the laws prove that you are wrong!” instead of recognizing the absurdity of the need for a law to protect a story.

It strikes me that real genocides are suppressed while the fictitional one is stoked up with a fury which seems to grow stronger every year. Real genocides such as the Holodomor are hardly known while Jewish “holocaust studies” are becoming mandatory curriculum in many places around the world.

This short introductory video to the “Committee for Open Debate on the Holocaust” website is one of the so-called crimes which caused Professor Anthony Hall to be suspended from his tenured position at the University of Lethbridge in Alberta. Any thinking person should recognize that there is something deeply wrong when a history professor is persecuted for saying we should be able to examine our history.

The old saying “the truth will set you free” is really true. In spite of some hardships, I have a deep sense of peace and serenity. This stems from the clarity in my mind and heart and soul, that I have truth on my side. We are at the core of the peace movement when we seek to tell the truth. Lies and deceptions are what bring us wars and turmoil. Remember the Mossad motto: By way of Deception, thou shall do war.

There are “red-pilled” people everywhere. That I have learned for sure, as I have heard from many of them. They are in every little town, village and hamlet. The people are waking up in droves, every single day. The rate of awakening is explosive. There is no doubt in my mind that truth and light will prevail.

The fact that there is such a ferocious attempt to stifle dissent proves that Jewish Power depends on mass deception. An awakening will destroy that power. Why else would they need to silence anyone who steps out of line? Why else would they feel so threatened by truth revealers, if their power did not depend on keeping the people deceived, deluded, distracted and demoralized? If their power did not depend on us being asleep, they would not be in such a panic when some of us wake up.

For that reason, I know there is hope! I also know we have our work cut out for us, as the demoralization runs deep. Each and every one of us really has no choice but to do everything in our own power and ability to contribute to the ripple effect of the grand awakening. We must educate ourselves and educate others. Many many people are doing just that, and that includes Jews as well as Gentiles.