The great Udo Walendy dies in Germany at age 95

There is not as much information on the Internet as there should be for this important revisionist historian. But that’s the story of our time. 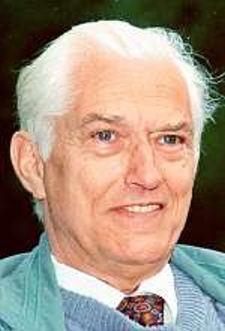 Walendy was born in Berlin on 21 January 1927. He died November 17 in the same city at the ripe age of 95. His best-known book is the classic Truth for Germany – The Question of Guilt for the Second World War, first published in 1964.

He served in the Reich Labor Service and then as a Luftwaffe helper as a teenager before being drafted into the Wehrmacht when he turned 18 in 1945. Walendy completed his secondary education after the war, then attended journalism school in Aachen. Between 1950 to 1956 he studied political science at the Hochschule für Politik in West Berlin, receiving a diploma (a degree in Germany). For the next ten years he was employed as the director of a folk high school (adult education) in Herford and as business leader of an employers association in Bielefeld. [Remember, he was associated with “undesireable” political views in post-war Germany.]

Walendy as author and publisher 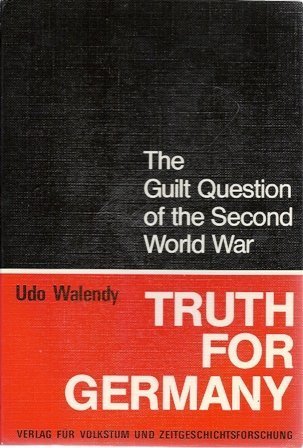 As early as 1964 he published his own book, Wahrheit für Deutschland – Die Schuldfrage des Zweiten Weltkriegs (Truth for Germany – The Question of Guilt for the Second World War), which in 1979 was listed by Germany’s ‘Federal Department for Media Harmful to Young Persons’ as material that could not be publicly advertised or given to young readers. The sole reason was that it differed from the official history in the way it presented the events that led up to WWII. In other words, it didn’t put the full blame on the German Third Reich.

After a long legal battle. this restriction was lifted in 1994 on the grounds that Walendy’s constitutional rights (as an academic) had been violated.

Castle Hill Publishers (UK) republished an “updated, expanded and corrected,” and re-translated 2nd edition in 2014, under the title Who Started World War II: Truth for a War-Torn World. I personally don’t appreciated the change in title, so I don’t know if I would appreciate the new translation either. But since it’s probably an attempt to increase the book’s readership in today’s world, and since Udo Walendy must have given his permission, and I don’t intend to study and compare the two versions, my cursory opinion is irrelevant.

Walendy’s historical revisionist magazine series Historische Tatsachen (Historical Facts), continues to be published by the Vrij Historisch Onderzoek (VHO) in Flanders. It began in 1974 with a translation of Richard Harwood’s booklet “Did Six Million Really Die?”.

Walendy was also responsible for the German translation of Arthur Butz’s ground-breaking book The Hoax of the Twentieth Century, which shed a shining light on so much of the faulty, often concocted, “evidence” for the “Holocaust.”

Udo Walendy was imprisoned in 1999 for fifteen months for “publicly questioning the Holocaust” under Germany’s Volksverhetzung law (incitement to hatred).

We’ve now lost one of the best of the German patriots, who continued to fight throughout all these years, sacrificing personal material ambitions and comfort in the interests of justice and truth for the nation he loved. A true fighter. Herzlichen Dank, Udo Walendy. — Carolyn Yeager