RE: “Bylaw addition would give chairman more power over delegates”  (Mississauga News, July 20, 2017)

I fear that, like the ancien regime, the Peel District School has grown out of touch and arrogant.

Now, a new bylaw proposal seems even more ham-handed in stifling opinions they don’t like. It says, in part: “Delegations who use offensive language, make any disorderly noise or disturbance … or behave in a manner that is not consistent with … the Ontario Human Rights Code, may by ordered to discontinue the presence and/or leave the board room … or premises.”

In other words, parents and taxpayers, shut up but don’t forget to send in your August property tax installment that pays for the Board, and make sure it reaches us on time.

“Offensive language” is utterly subjective and, in an increasingly diverse and divided society, someone is likely to take offence at almost any remark.

Even more preposterous is the decision to turf people whose comments, presumably, are not consistent with the Ontario Human Rights Code. And the Board chairman is to make a snap decision to cut off a speaker? Nothing is contrary to the OHRC until a complaint has been launched, a hearing held where evidence pro and con and submissions pro and con are made and a finding of forbidden discrimination made.

Chairman Barbara McDougald, ironically, in your report clarifies the sinister censorship aims of this proposed bylaw. “An example of a delegate who could be asked to leave the property would be in individual who publicly describes another person in a ‘hateful way'”. Really? “Hateful” is entirely in the eyes of the beholder. Our community encompasses strong and antagonistic views which will clash.

We’re the taxpayers. It’s the Board who spends our money hugely who should shut up and listen to the taxpayers. And, no we shouldn’t have to doff our caps and bleat, “May I?”

Recommendation prompted by past disruptions over Muslim prayer issue

A recommended addition to Peel District School Board by-laws around delegations would give the chair the power to have a delegate removed from the building if their public address contravenes the Ontario Human Rights Code. – Metroland file photo

A recommended addition to Peel District School Board bylaws tighten control over delegations.

The current board bylaw about delegations indicates, for example, that anyone who comments on the character of an identifiable individual such as a trustee during their delegation could be asked by the chair to stop and/or leave the room.

However, the hornet’s nest that was the Muslim prayer issue in the Peel board this school year has prompted an addition to section G-3 that looks to crack down on delegates who veer into offensive territory.

The suggested addition, which trustees vote on June 19, reads: “Delegations who use offensive language, make any disorderly noise or disturbance, resist the rules of the board, disobey the decision of the chair or of the board, or behave in a manner that is not consistent with board policies and the Ontario Human Rights Code, may be ordered by the chair to discontinue the presentation and/or leave the board room or meeting room or premises.” 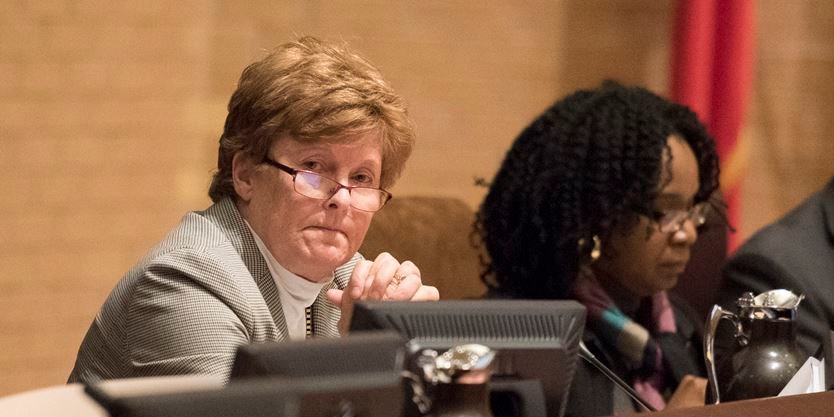 If passed, it appears chair Janet McDougald, who does not have a legal background, would then be permitted to determine if a delegate contravenes the OHRC in their delegation — and, if she thinks so, that individual could be removed from the property.

Asked if she is in a position to make that determination, she replied, “I think the chair, as long as they understand what the human rights code says, then they’re capable of interpreting it.”

McDougald told The News she does not have a fulsome understanding of the OHRC, but, if the bylaw addition passes, she would familiarize herself accordingly.

“I won’t know the entire code, but I will certainly understand the parts of the code that would relate to this particular activity of delegations,” she said.

Any issue interpreting legislation, she said, the chair would likely seek legal counsel.

McDougald does not think that having the power to throw a delegate out of the building is overstepping any bounds.

An example of a delegate who could be asked to leave the property would be an individual who publicly describes another person in a “hateful way,” regarding their culture, race or background, she said, adding that delegates should disagree respectfully.

A change to a board operating procedure around how religious accommodation for Muslim students is handled came into effect last September. That change, which involved students no longer being able to write their own Friday prayer sermons, stirred up the Muslim community.

The board reversed its decision in January, which then drew the ire of those opposed to the Muslim faith, or any religion in public schools.

The intensity rang out over the next four months, as board meetings were packed with critics who wanted Muslim prayer out of Peel board schools.

The board continually reiterated that they were required under the OHRC to provide religious accommodations to the point of undue hardship.

Disruptions eventually tapered off in April when new security measures required attendees to provide photo identification before entering a meeting.

Board bylaws and policies are examined annually by the trustee review committee.

Another recommended bylaw change involves the chair being able to determine the length of the public question period at meetings.

Politicians Define Any Opposition to Special Privileges for Moslems as “Racism” or “Hate Speech”
The loud media apologists for M-103 — radical Moslem Liberal MP Iqra Khalid’s denunciation of Islamophobia, systemic racism and her call for the Common s Heritage Committee to recommend measures to combat these say,  “Don’t worry. It is just an expression of sentiment, not legislation.” True, but the follow-up will be legislation. “Islamophobia” is such a vague term. Considering the terrorist mayhem perpetrated by some Moslems in the name of their faith, a certain caution about Moslems would seem only sensible.
In case you believe “Islamophobia” only covers some irrational anger at Moslems, look at the comments of Brampton’s Mayor Linda Jeffrey. If you criticism special privileges for Moslems in the public schools, you’re engaged in “hate speech”.
Recently, the Peel District School Board announced it was hear no more public delegations about Moslem special privileges and Friday prayers. You may be a parent and/or taxpayer in Peel, but you just shut up and don’t forget to pay your taxes. We only want to hear from privileged minorities and their White collaborators and cheerleaders. Of course, Christmas assemblies disappeared years ago in the name of inclusiveness and diversity. It’s a real verbal trick to enforce “inclusiveness” by excluding the Christian Majority. At the February Board meeting, the Board’s ancient Chairman Janet McDougall cut off delegations critical of favouritism for Moslems and denounced as “racist”  a citizen wondering whether the Friday sermons at these privileged prayer sessions would be vetted for “hate speech”.
Paul Fromm
Director
CANADIAN ASSOCIATION FOR FREE EXPRESSION
Mayor Calls Criticism of Muslim Prayers In School ‘Hate Speech’
by David Krayden, The Daily Caller
March 10, 2017
http://dailycaller.com/2017/03/10/mayor-calls-criticism-of-muslim-prayers-in-school-hate-speech/

Brampton, Ontario — Mayor Linda Jeffrey is dismissing critics who object to Muslim students having Friday prayer sessions in public schools as purveyors of “misinformation and hateful speech.” Jeffrey was responding to critics in a letter she released Thursday as Toronto-area parents in the Peel District School Board are preparing a full-scale protest on Saturday to demand that public schools not promote one religion over another.

The parents have organized a “Canada First” movement and plan a “Walk to Oppose Religion in Schools” this weekend at Celebration Square near Square One in Mississauga, a suburb of Toronto. They are also opposed to the motion introduced by local Liberal Member of Parliament Iqra Khalid that would ban “Islamophobia” and potentially make their protest subject to hate crimes legislation.

The parents are furious with the Peel District School Board’s decision to lift all restrictions on what are called “Friday prayer days” for Muslim students. The sessions take place on school time and include both prayers and sermons that are usually read in Arabic — leading many to ask just what is being said.

At the last board meeting, parents expressed their outrage over school board chairwoman Janet McDougald’s dismissive attitude when she was asked, “When you vote to allow Islamic Prayer in public schools, will you record all sermons that are offered in Arabic so we can analyze them later to ensure there is no hate speech being offered?”

McDougald called the questioner a “racist” and threatened to not take any more questions at the meeting.

In January the board lifted restrictions it had placed on the Muslim students that limited their selection of prayers and sermons to a pre-approved list. Now they can choose whatever they want.

Parents also want to know why there is Muslim prayer in public schools when no other religion is accommodated with special prayer sessions.