The author of the piece, Mount Royal University geography instructor Mark Hecht, reviewed current research on the issue of ethnic diversity and social trust, and posited that immigration policy should be informed by norms of cultural compatibility and cohesion.

You probably never got the chance to read the original article – it was only live for a matter of hours, after all.

Activists and journalists immediately took to social media to accuse Hecht, the Vancouver Sun, and Postmedia (the Sun’s parent company) of bigotry, hate and white supremacy. The editor-in-chief of the Vancouver Sun apologized for running Hecht’s article, and the article was quickly pulled from their website.

Most of the criticism directed toward the op-ed was filled with name-calling and hyperbolic accusations, while few critics refuted Hecht’s claims, which he himself admitted were controversial.

Hecht then moved to Victoria, BC, and in February 2020 he applied to join the Canadian Armed Forces (CAF) Naval Reserves.

“I liked the idea of serving my country, and the camaraderie of the armed forces,” Hecht told True North. “I’ve also always been attracted to water and ships, which is why I applied to the Navy.”

Over the next few months, Hecht completed “four-fifths” of the recruitment process: he met with a recruiter, passed his aptitude and physical fitness tests and completed his medical examination. The last task on Hecht’s checklist was a written exam specific to the Public Affairs Officer position, which he was encouraged to pursue by a Canadian Armed Forces (CAF) recruiter.

But in late October, Hecht received a letter in the mail that told him, “at this time, your application to the Naval Reserves will be ceased. In light of an article that you published in 2019, it was deemed that the views you expressed do not reflect the Canadian Armed Forces policy on Discrimination, Harassment, and Professional Conduct.”

The letter went on to say that the CAF forbids verbal and written statements that “promote discrimination or harassment on the basis of a prohibited ground of discrimination, as defined in the Canadian Human Rights Act (CHRA).”

“Nothing I said in the op-ed goes against the Canadian Human Rights Act,” Hecht counters. He points out that much of the article was a rehashing of existing social science research and data.

Hecht was “quite looking forward” to working with the Naval Reserves: “I was getting excited about it…I had invested a lot of time and energy, such as making sure I was fit as a 50-year old, because you’re going up against 18-year olds.”

True North reached out to the CAF and asked which line(s) from Hecht’s op-ed promote discrimination and harassment.

“The CAF is committed to increasing diversity and being an inclusive organization where diverse perspectives are welcomed and valued,” Captain Mathieu Dufour replied in a statement. “Mr. Hecht’s op-ed presents and supports an argument for a society with less ‘diversity, tolerance and inclusivity.’ By doing so, Mr. Hecht demonstrates opposition to the values and policies of the CAF.”

“The policies and direction that govern the conduct expectation of CAF members are incongruent with Mr. Hecht’s publically [sic] shared personal belief that diversity weakens Canada.”

Again, no one is refuting the facts and research findings that Hecht presents in his article: he discussed studies on Muslim integration in Denmark; a paper on diversity and economic growth written by a Harvard economist; and sociological research about self-segregation, ethnic enclaves and social trust.

Apparently, discussing this research in the public realm and challenging the de facto state religion of diversity and inclusion renders you unemployable in Canada.

Hecht is now seeking legal representation to take the CAF to court.

“There seems to be a real issue with freedom of opinion,” says Hecht.

“A lot of people are afraid to speak their minds these days. It’s a threat to our democracy.”

RCMP were called in as tensions rose outside a controversial event at the University of British Columbia Wednesday night.

The event organized by student-led group Students for Freedom of Expression invited two controversial speakers to attend. One of them was Mark Hecht, who wrote a highly-criticized anti-immigrant op-ed for the Vancouver Sun last month.

The other speaker was Ricardo Duchesne, who has been critical of multiculturalism and Canada’s immigration policies.

But the event was met by dozens of protesters, upset over the university’s decision to give a platform to what they say is far-right hate speech.

“We did get a call from campus security that some of the people demonstrating and protesting were banging on the windows,” said Const. Kevin Ray with UBC RCMP. “There was some pushing and shoving.”

Protesters outside are pushing, blocking, & shoving attendees. Only way to enter is to be shoved in with help from security. 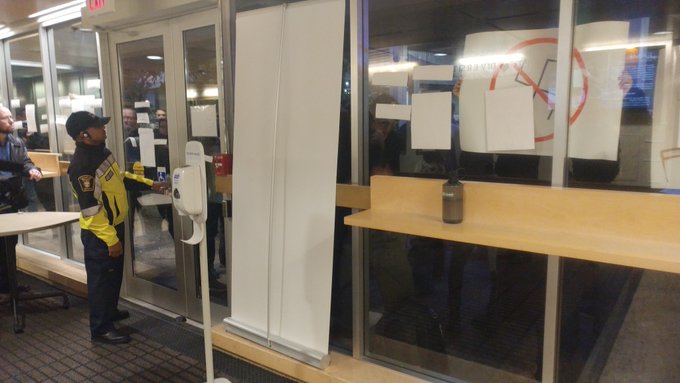 19 people are talking about this

“When everyone went inside, security thought it was possible that they would smash the windows with their banging,” said Nicholas Kosovic, founder of the group who organized the event. “Some of the attendees were frightened.”

According to the group, about 80 people attended the event.

In an email to CBC News, vice-president of academic Andrew Szeri confirmed RCMP had to get involved due to safety and security concerns.

In a statement released last month, the university defended its decision to go ahead with the event.

“Discussion and debate cannot occur without the free and lawful expression of ideas, even those we may fundamentally disagree with, find distasteful or even repugnant,” read the statement.

RCMP say no one was hurt and no arrests were made. Approximately 10 officers responded to the call and had to stay in place until the event was over, Ray added.

CBC News has reached out to Students Against Bigotry, the group that organized the protest outside the event.