Like her mother Cynthia, Margaret, who is a high school sophomore, has also run against biological males. She probably would have won her first and only pre-COVID track meet of last season (instead of placing second) had she not been competing against a biological male, who predictably took first place. We also heard from three-time Olympian Inga Thompson, a retired road bicycle racer, who has raced with men when there were no women’s events, and she explained first-hand how much stronger and faster men are than women when competing in athletics.

I think the majority of Kentuckians and Americans would agree that boys should not be competing in girls’ sports. Thank you to these brave women for standing up and sharing their stories.

For more of Margaret and Cynthia’s stories, you can check this video out HERE.

Dr. Rand Paul Speaks on Foreign Spending and the Need to Prioritize America

It has always been my priority to put America’s and Kentucky’s interests first. This means focusing on funding critical infrastructure projects at home, rather than sending tax dollars abroad to fund infrastructure in Afghanistan. 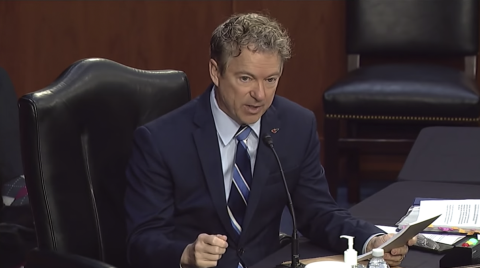 On Wednesday during a U.S. Senate Foreign Relations Committee hearing, I spoke on the need to prioritize our country’s needs over those overseas. I explained that during my time in the Senate, I have seen our national debt grow to over $28 trillion, while the U.S. has continued to increase foreign aid by 70 percent over the last decade.
Following my remarks, I introduced an amendment that would have cut foreign aid across the board and allowed for those funds to be saved or redirected back to the taxpayers and instead spent on projects in their own communities.

Kentucky’s needs should always come first, and I promise to keep fighting to fund your roads and bridges instead of ones overseas.

You can watch my full remarks HERE and to read my amendment click HERE.

This week, I penned an op-ed in the Cincinnati Enquirer on cutting wasteful spending and redirecting those funds toward our country’s critical infrastructure projects.

As I wrote in the op-ed:

I have long been a champion on the issue of prioritizing Kentucky’s critical infrastructure projects. Year after year, I’ve introduced legislation that would redirect one percent of non-infrastructure spending to domestic projects, and ensure more of Kentuckians’ hard-earned tax dollars are spent on important projects in your own backyards and communities. In addition, I’ve forced votes on cutting foreign aid welfare and using that money for roads and bridges here at home.

Despite my persistent efforts, Congress has continued to fail the American people on this issue. Democrats and some Republicans apparently care more about building roads and bridges in Afghanistan than those here at home.

Soon, the U.S. Senate will take up what we hope is a bipartisan infrastructure bill – I won’t hold my breath on that – but it could fund some of our nation’s most critical infrastructure projects, like the Brent Spence Bridge. America needs to invest in infrastructure, but with our national debt growing by the trillions, we must find a way to pay for needed projects without incurring additional debt.

Democrats are proposing a $3.5 trillion reckless tax and spending spree under the guise of infrastructure by including pet projects that have nothing to do with infrastructure. Did you know reparations for slavery, free child care, free health care, free cars, free college, free you-name-it, are now considered infrastructure by Democrats?

Certainly, a 60-year-old bridge that serves as a critical element of our nation’s infrastructure, carrying both I-75 and I-71 traffic through the Greater Cincinnati and Northern Kentucky areas, and serves as a connection point for 10 different states, would be higher priority.

On Wednesday, I reintroduced my legislation to get government off the backs of farmers and landowners. The Defense of Environment and Property Act of 2021 restores common sense to federal water policy by redefining “navigable waters,” excluding ephemeral or intermittent streams from federal jurisdiction, and restraining the power the Environmental Protection Agency and the Army Corps of Engineers hold over American landowners.

While some would have us believe we can only protect the environment by giving the federal government more control over Americans’ lives, my bill shows we can act while still respecting Americans’ private property rights and the Constitution’s limits on federal power.

Kentucky’s farmers and coal industry suffered when the Obama administration implemented its burdensome WOTUS rule. Though the Trump administration replaced that rule, we know the new Biden administration will certainly try to return us to an unworkable scenario again. That’s why it’s now more important than ever to make an actual change to the law to fix the problem, and protect our land and invaluable industries.

“We offer our thanks to Senator Rand Paul for introducing the Defense of Environment and Property Act of 2021 as we look forward to the clarity such legislation would bring to the Waters of the U.S. issue,” said Mark Haney, President of Kentucky Farm Bureau. “Farm families have always been on the forefront of good stewardship when it comes to natural resources, but we need to have some clear direction on the definition of navigable waterways that are defined in statue, not by regulations that are subject to change with every new administration. We believe this bill will do just that.”

To learn more about the Defense of Environment and Property Act click HERE.

As Ranking Member of the Senate Committee on Small Business and Entrepreneurship, each week I recognize an outstanding Kentucky small business that exemplifies the American entrepreneurial spirit.

This week, it is my privilege to recognize Bird Dogs Coffee, a family-owned small business in Owenton, Kentucky, as the Senate Small Business of the Week.

Located in the heart of Owenton, Kasey Craigmyle Towles opened Bird Dogs Coffee in 2015. Kasey, who grew up in Owenton, and was the founder and operator of “Kasey’s Corner,” a successful gift shop, decided to pursue a different business venture that would uplift her hometown and foster a sense of community.

When Bird Dogs Coffee opened its door, Kasey and her husband, Randy, were seizing the opportunity to fill a gap in the Owenton market since there was not a coffee shop in town.

Bird Dogs Coffee is a remarkable example of how hard work, ingenuity, and discipline can turn a dream into reality. Small businesses, like Bird Dogs Coffee, form the heart of towns across Kentucky, regularly stepping up to support their communities.

To learn more about Bird Dogs Coffee you can visit their website HERE.

This week I, alongside the Fund for American Studies, held the final installment of our intern lecture series, hosting over 250 interns from across the Hill.

These free educational opportunities allow Washington, D.C., interns to learn from prominent speakers on topics surrounding freedom, civil liberties, and free enterprise. Our lecture series is open to all D.C. interns and is a great platform to network with other students interested in economic freedom and limited government.

Our final guest this week was Mr. Randy Barnett, the Patrick Hotung Professor of Constitutional Law at Georgetown University who spoke on combating the radical left’s agenda promoting social justice and what we can do to stand up to it, as well as the important role that the 14th and 15th amendments play in today’s America. He also talked about the need for more judicial activism among our youth, teaching them to stand up for our rights and defend the Constitution against those who wish to change it. It is up to the young people of today and future generations to shape a future that cancels cancel culture itself and says no to the growing ideology of group-think.

As the series comes to an end, I am excited to continue my work with TFAS in the fall, working to bring great speakers from around the country to touch on the issues facing our nation and highlight the importance of freedom and civil liberties.

Have an Issue or Concern?

If you are a Kentucky resident and need assistance with a federal agency or with navigating the federal response and ongoing community needs related to COVID-19, please feel free to contact my Bowling Green office at 270-782-8303.  One of my staff members will be more than happy to assist you.

Stay in Touch with Dr. Paul

You can watch my Senate floor speeches and press interviews on Rumble HERE and my YouTube channel HERE. You can also sign up to be notified about my telephone townhall events HERE.