In an all out war on politically incorrect dissent, Silicon Valley censors at Facebook banned a host of “dangerous” voices on Thursday. These included Nation of Islam leader Minister  Louis Farrakhan, talk radio host Alex Jones, two-time Congressional candidate Paul Nehlen, and commentators Laura Loomer, Milo Yiannopoulos and Paul Joseph Watson. So, it’s “dangerous” voices who are being banned. Can we expect a ban on those promoting communism or abortion? Likely not.

Now more than ever, freedom lovers should start demanding that the Silicon Valley tyrants, who have virtual monopolies, we treated by legislation as public utilities that are compelled to serve ALL customers, without discrimination, in this case, on the basis of their controversial views.
Was Facebook founder and head Mark Zukerberg, a prominent Jew, just obeying the directive set out in a totalitarian demand made by Israeli Ambassador to the UN Danny Danon this week? The Jerusalem Post (April 30, 2019) reported: ‘The only way to stop antisemitism is to criminalize it, Israel’s Ambassador to the UN Danny Danon told reporters in New York on Monday. ‘The time for talking and having a conversation is over,’ Danon said. ‘What Israel and the Jewish community around the world demand is action – and now.’ Danon …   said that those who engage in antI-semitism ‘must be punished. Whether it is here at the UN [or by] political leaders, editors, policy pundits or college professors, it does not matter. Antisemitism should have no place in our society,” he continued. “Until it becomes criminal, this bigotry will persist; it will fester.'” So, criticism of Israel or Jews should be criminalized. It just so happens that many of the recently banned people have been critical of Jews. The others, interestingly, are critical of radical Moslems (Laura Loomer).

To his credit, President Donald Trump rallied to the defence of freedom of speech and these freethinkers: ” On Twitter Friday night (May 3, 2019), President Donald Trump railed against ‘the censorship of AMERICAN CITIZENS on social media platforms” and complained that conservatives were being unfairly pushed off social media.” (The Slatest, May 4, 2019). If the seven banned people were being silenced for “dangerous ideas, ? he asked, “.“Why is @nytimes, @washingtonpost, @CNN, @MSNBC allowed to be on Twitter & Facebook.  “Much of what they do is FAKE NEWS!”
Paul Fromm
Director
CANADIAN ASSOCIATION FOR FREE EXPRESSION New York (CNN Business)Facebook announced Thursday that it had designated some high-profile people, including Nation of Islam leader Louis Farrakhan, who’s notorious for using anti-Semitic language, and right-wing conspiracy theorist Alex Jones, as “dangerous” and said it will be purging them from its platforms.

Jones and his media outlet InfoWars had previously been banned from Facebook (FB) in August 2018, but had maintained a presence on Instagram, which is owned by Facebook. On Thursday, Jones and InfoWars will be barred from Instagram as well.
Other people banned on Thursday included Paul Nehlen, an anti-Semite who unsuccessfully ran for Congress in 2016 and 2018, and fringe right-wing media personalities Laura Loomer, Milo Yiannopoulos and Paul Joseph Watson.
“We’ve always banned individuals or organizations that promote or engage in violence and hate, regardless of ideology,” a Facebook spokesperson said in a statement provided to CNN Business. “The process for evaluating potential violators is extensive and it is what led us to our decision to remove these accounts today.”
A Facebook spokesperson told CNN Business the company goes through a lengthy process and takes into consideration a number of factors before determining an individual to be “dangerous.” 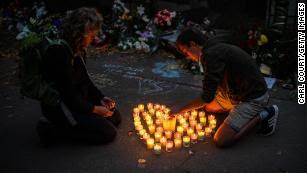 What Facebook, Twitter and YouTube can do now to stop terrorism and hate online
The Facebook spokesperson said such factors include whether the person or organization has ever called for violence against individuals based on race, ethnicity, or national origin; whether the person has been identified with a hateful ideology; whether they use hate speech or slurs in their about section on their social media profiles; and whether they have had pages or groups removed from Facebook for violating hate speech rules.
In some instances, when Facebook bans an individual or organization, it also restricts others from expressing praise or support for them on its platforms, the spokesperson said, adding that the company continues to view such action as the correct approach. That policy may not apply to any or all of the people banned Thursday, however.
The spokesperson added that Facebook will remove groups, pages and accounts created to represent the banned individuals when it knows the individual is participating in the effort.
Some of the individuals who were designated as “dangerous” responded to the ban on their accounts in the brief period between when Facebook announced the ban and when Facebook scrubbed the accounts.
Loomer, for instance, denied in an Instagram post that she ever violated the company’s terms of service. Loomer asked people to follow her on an different platform, adding, “Looks like you guys will probably never hear from me again.”
Yiannopoulos also published a final post on Instagram.
Watson used Twitter, from which he has not been banned, to write, “In an authoritarian society controlled by a handful of Silicon Valley giants, all dissent must be purged.”
Farrakhan, Jones and Nehlen did not immediately respond to requests for comment.
Some critics questioned why Facebook banned the accounts in one fell swoop on Thursday, instead of taking action against the accounts at the time they were determined to have been in violation of the company’s rules. These critics suggested the announcement was designed to generate positive publicity for the company, which has a history of being slow to act on such matters and of only taking action after facing pressure from the public.
It is possible it simply took Facebook a significant amount of time to reach a decision on whether to label the individuals as “dangerous.” In late March, Business Insider obtained emails showing Facebook executives in an intense debate over whether or not to take action like this against Jones.
At the time, a Facebook spokesperson told CNN Business, “As this email correspondence shows, we continually monitor and review whether people are involved in organized hate on our platform. We’ve already taken down InfoWars’ Facebook Page, but Alex Jones has a network of presences online and we are evaluating how to appropriately enforce our policies against him as an individual. We’re committed to being diligent and will share an update when that process has run its course.”