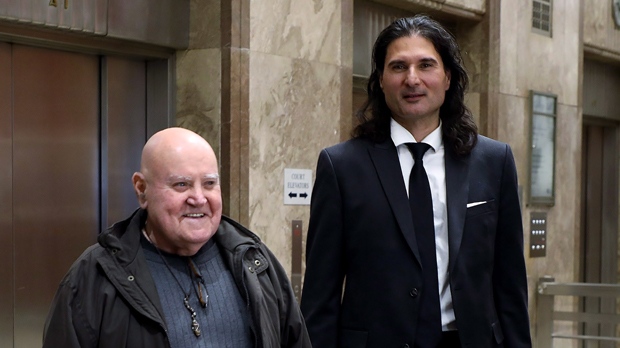 TORONTO — The publisher of a free Toronto newspaper that promoted hatred against Jews and women was sentenced to 12 months of strict house arrest on Thursday after the judge said the man’s Indigenous status, poor health and expression of regret over the publication’s direction should be taken into account.

In his decision, Ontario court judge Richard Blouin confined LeRoy St. Germaine to his home, with exceptions for medical appointments and four hours a week to shop for necessities.

The conditional sentence contrasts with the maximum one-year prison term handed down a week ago to James Sears, the editor of Your Ward News, who was released on $500 bail on Tuesday pending an appeal. Blouin had said he would have given Sears a stiffer sentence had the law allowed.

“Mitigating factors reduce the moral blameworthiness of Mr. St. Germaine, while the gravity of the offence remains high,” Blouin said. “Although Mr. St. Germaine was aware of the content of Your Ward News as edited by Sears, there is no evidence he created any of it.”

The prosecution had called for a six-month jail sentence for St. Germaine along with probation, which Blouin declined to impose.

Blouin convicted both St. Germaine, 77, and Sears, 55, in January for promoting hate via the publication, which was said to have had a circulation of 300,000 along with its online presence. The offensive content — articles and images that relentlessly attacked Jews and women in vile terms — was taken down as part of Sears’ bail conditions.

Like Sears, St. Germaine said after the hearing he would appeal both sentence and conviction, saying outside court he had been the victim of a witch-hunt. Those who find his views offensive should “suck it up,” he said.

“I believe in free speech,” he said. “I’m a Metis. My family has been in this country for hundreds of years. To have other people telling me what I can and cannot say just doesn’t go with the grain here.”

St. Germaine, who said he wanted to go back to his “old style” of going after “dirty politicians,” expressed relief at avoiding jail.

“I never go anywhere anyway,” he said. “My yoga instructor will have to come to me now.”

Prosecutor Jamie Klukach, who expressed satisfaction with the outcome, said the convictions for inciting hatred against women might be a first. Klukach conceded that criminalizing any speech is controversial, but said the bar for a hate conviction is high.

While the Crown has in the past been reluctant to give hatemongers a platform, current policy is to vigilantly enforce the law, she said.

In imposing house arrest rather than jail, Blouin said St. Germaine posed no danger to the community, had been an otherwise productive citizen for many years, and had co-operated with police. The judge also said the publisher suffers a heart and lung condition, and the law mandates the accused’s Indigenous background had to be taken into account.

While St. Germaine had indicated earlier he would be cutting off contact with Sears, he did put up a web post supportive of the editor’s bail, which the Crown opposed on the basis the appeal was frivolous.

“Like Jesus, Dr. Sears rose again!” St. Germaine wrote. “He walked out of the court and back into the arms of his wife and son, fresh handcuff marks still on his wrists in the same spots where Jesus was wounded when he was nailed to the cross.”

In support of his appeal application, Sears claims the judge was biased and gave insufficient reasons for the conviction. He previously failed to have Blouin reopen his trial on the basis that his defence lawyer had thrown the case.