What Sort of Man Seeks to Have Another Fired, His livelihood Imperilled & He and His Family reduced to Poverty?

Indeed, what sort of man seeks to have another fired, his livelihood imperilled and  he and his family reduced to poverty? And all because of the victim’s political beliefs at one time expressed on his own time and on his own time. What sort of driven man would do such a thing? Why, a person who describes himself as an Ottawa-based “human rights lawyer”. That would be federal civil servant Richard Warman. Warman seems to find immense time to try to ruin people with whom he disagrees politically.

In the glory days of Sec. 13 of the Canadian Human Rights Act (Internet censorship), Warman filed nearly 30 complaints. He boasts, in his affidavit seeking a peace bond against Kevin Goudreau, who has never contacted him”,” I have successfully brought 16 human rights complaints against online hate … resulting in permanent cease and desist orders.” Also, many of the victims were fined and two — Terry Tremaine and Thomas Winnicki — ended up spending time in prison because of Mr. Warman’s actions. More recently in attacking anti-Cultural Marxist satirical publication YOUR WARD NEWS, Warman, who lives in Ottawa, contacted Child Protective Services in Toronto, according to testimony at a recent trial, to try to get editor Dr. Sears’ son taken away. [An investigation found that Dr. Sears and his wife were loving parents.] 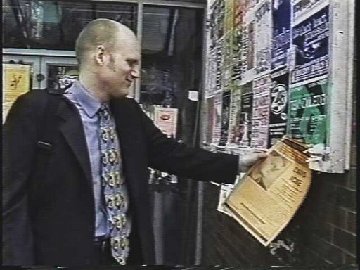 So, while snowflake Richard Warman whines about being so afraid of his political enemies, he relentlessly seeks to have them destroyed. In a July 16 letter he wrote on behalf of  the Canadian Anti-Hate Network to Hamilton City Council, Warman who works for the federal government (when does he find time to do all this mischief?)  seeks to have Mr. Lemire fired for his political views. Mr. Lemire was the longtime webmaster of the Freedomsite and was the subject of a Warman Sec. 13 complaint which Mr. Lemire partially won.

The letter filled with the false “neo-Nazi” smear, reads as follows: “I am a human rights lawyer in Ottawa and brought the successful human rights complaint against Marc Lemire for online hate (http://canlii.ca/t/1q60s).   I have commented in numerous media stories about the recent exposure by Mack Lamoureux of VICE Canada that Marc Lemire is an employee of the City of Hamilton. I note that since the VICE article, various media reports have indicated that Marc Lemire denies any ongoing role in the neo-Nazi[sic] movement, minimizes any prior role despite Federal Court findings to the contrary, and claims that this was all many years in the past and that he is now reformed.

I do not believe this to be true. Marc Lemire openly acknowledges that he is responsible for the website http://www.freedomsite.org/. It took me less than 5-minutes to come up with multiple examples of Holocaust denial material from Marc Lemire’s Freedomsite website that remain available as of right now. Marc Lemire continues to publish to the world columns by Holocaust denier Philip Belgrave and others and at the bottom of the columns readers are invited to submit material to the webmaster (Lemire) for publication. The first article is titled “What is Anti-Semitism?” and states that Jews were not exterminated nor were they the principal sufferers in WWII, links to Ernst Zundel’s

I am confident that if I continued my search, I would find further such hate propaganda. Based on the fact that Holocaust denial material remains available on Marc Lemire’s website, I submit to you that he is not fit to be an employee of the City of Hamilton.”

It might be noted that, even in Canada, questioning the so-called holocaust is not a crime, and, far from being “hate”, is, in fact pursuit of the truth.

External probe will track databases, computers and cellphone use

OPINION May 23, 2019 by Andrew Dreschel  The Hamilton Spectator

Marc Lemire, is seen in this undated file photo. Lemire, an information technology analyst, was exposed earlier this month as the alleged former head of the notorious but now defunct Heritage Front.

A City of Hamilton staffer under investigation for links to a white supremacist group has been placed on a leave of absence pending the outcome of the probe.

Marc Lemire, an information technology analyst, was exposed earlier this month as the alleged former head of the notorious but now defunct Heritage Front, igniting a firestorm of community outrage and concerns over his potential access to personal information.

City employees under investigation are placed on either a paid or unpaid leave of absence.

Because of privacy rules, at this point the city can’t specify whether Lemire is being paid or not. Choosing her words carefully, city manager Janette Smith would only say he’s “not at work while the investigation is going on.”

Smith doesn’t know how long the probe will take, but she expects it to be completed sooner rather than later.

“We’re looking at weeks, not months. I don’t want this to drag on for everyone involved.”

According to Smith, the city has hired two external firms to conduct the investigation. She declined to reveal their names — she believes one contract has yet to be signed.

“What I will say, though, is the report will come directly to me.”

Smith says it was decided to hire two firms in order to be “thorough.” The companies are looking at, among other things, what data Lemire may have had access to.

According to city human resources director Lora Fontana, in a case like this, experts would also research web-based information from publicly available sources and use advanced search techniques to locate information on social media, deep web databases, people and record sites as well as forensic imaging of computers and cellphones.

Lemire, who’s believed to be in his early 40s, has been linked in the past to racist and homophobic views, as well as controversial figures such as Holocaust denier Ernst Zundel, neo-Nazi Wolfgang Droege and white nationalist Paul Fromm, who ran for mayor of Hamilton last year.

The controversy over his employment erupted May 8 thanks to an article by Vice News. Lemire responded to local media inquiries by denying he’s a neo-Nazi or white supremacist, or that he was ever president of the Heritage Front. He claimed his connection to the Heritage Front dates back to his teens, insisted he rejected the group many years ago and asserted his professional integrity.

Some critics, however, allege he still publicizes extremist views on a website he maintains. Presumably the investigation will establish the facts of the matter.

The investigation hinges on whether Lemire — who was hired around 2004 — contravened the employee code of conduct or other policies governing staff behaviour. In other words, whether he has promoted views that could damage the reputation of the city.

Penalties for infractions cover a range of options, including unpaid suspensions to termination with cause.

“I know from my experience in leadership, you have to look at every situation uniquely and determine what’s the best course of action,” said Smith.

Angry citizens have criticized senior staffers for hiring Lemire in the first place and for failing to respond to concerns brought to their attention last fall.

It’s not clear if Lemire disclosed his connections with the Heritage Front at the time of his hiring or if management took any precautionary steps over previously raised concerns.

Smith didn’t directly answer a question about whether the investigation encompasses staff’s handling of the matter. She noted, however, that hiring is now a “different world” than it used to be, and she’ll look at whether changes need to be made.

As a non-unionized employee, Lemire could simply be fired without cause and sent packing with a healthy severance. But to her credit, Smith not only appears to be doing her best to get to the bottom of it all, she’s also striving to be fair to all concerned, including Lemire.