Did you know the majority of black deaths are caused by other blacks? Fix problems within your own community first before blaming others https://twitter.com/enndelbu/status/917080495250223104 …

(CNN)The woman stripped of her Miss Michigan 2019 tiara for tweets that the pageant’s organizers found offensive said Monday she stands by everything she says on social media, despite having apparently deleted one of the posts in question.

Kathy Zhu, a University of Michigan student and vice president of the school’s College Republicans, had her crown taken the day after it was placed on her head last week.
“They stripped me of my Miss Michigan title due to my refusal to try on a hijab in 2018, my tweet about black on black gun violence, and ‘insensitive’ statistical tweets,” she tweeted Thursday.
In her response to Miss World America officials, which she shared on Twitter, she says the organization has fallen for “photoshopped tweets” and that “a girl” has been targeting her “because she had grievances against me.”

‘We do have a problem’

The beauty queen posted a chain of text messages that she said she had exchanged with Laurie DeJack, state director for Miss World America Michigan.
In them, DeJack says she needs to talk to Zhu and instructs her not to post anything to social media.
“Do not go out representing Michigan World America. We do have a problem,” one text says.
Zhu pleads for more information. Eventually, Zhu is told her social posts are problematic. She is provided a link to a post in which she wrote, “Did you know the majority of black deaths are caused by other blacks? Fix problems within your own community first before blaming others.”
“How is that racist?” Zhu asks before texting, “It’s statistics” and “Didn’t know statistics were racist.”
DeJack disagrees, according to the texts posted by Zhu: “That is not a statistic. It’s a comment with no statistics to back it up.”
Zhu says she will come by DeJack’s house to drop off her crown and sash and accuses DeJack of believing “false claims” rather than sticking up for the state pageant winner.
“Maybe you should read a educational journal on the statistics of blacks killing other blacks … I go to school for this … I’ll save you the chance to lose this political debate. I’ll be dropping off everything at your front door,” Zhu says over three texts.
CNN’s efforts to obtain comment from DeJack and other Miss World America officials were unsuccessful. DeJack referred questions to the Miss World America national office. CNN cannot independently confirm the authenticity of the emails and texts posted by Zhu. 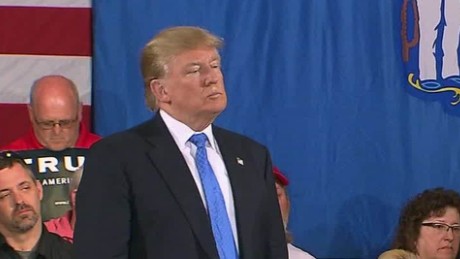 December 2016: Ex-beauty queen delivers tearful thanks to Trump 02:44
In the email Zhu posted, DeJack says that the organization was alerted to social media posts containing “offensive, insensitive and inappropriate content” in violation of pageant rules that require contestants to be of good character and not bring the organization into disrepute.
“MWA does not recognize you as a participant of any sort or in any capacity,” the email says, ordering Zhu to remove all references to participating in the pageant from her social media accounts.

Context is everything, Zhu says

Speaking to CNN on Monday — an exercise Zhu said was intended “to make sure the left will get an understanding of my stance and where I come from” — she maintained a similar defense. She did not deny tweeting two controversial statements attributed to her, nor did she accuse anyone of Photoshopping her tweets.
The black-on-black murder tweet must be viewed in its full context, she said. First, it was a response to another tweet, she said, which is true. She was responding to someone who had tweeted Vice President Mike Pence to say, “STOP KILLING BLACK PEOPLE !!!” 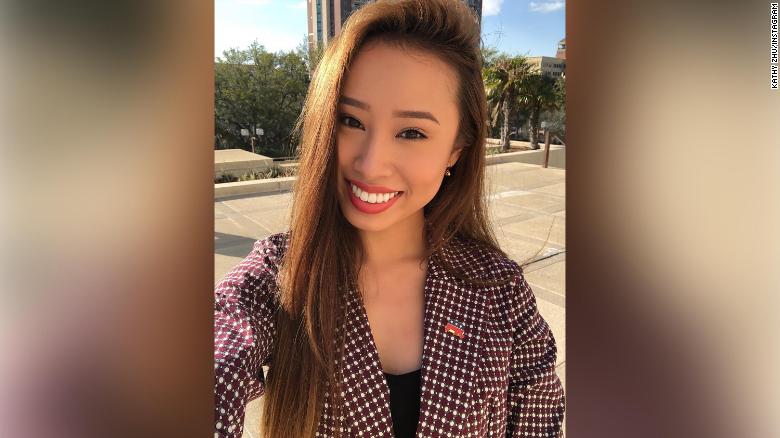 Kathy Zhu is vice president of the University of Michigan’s College Republicans.
Secondly, she said, she sees this as an attempt to hush an opinionated woman because of her conservative views.
“Everything I’ve posted was my statistics and my opinions, and I think that we should be empowering women’s voices and not just stripping them of their titles only because of their opinion,” she told CNN.
Pressed on why she responded to a tweet referring to police violence against African-Americans with a reference to black-on-black killings — when federal stats show most whites are killed by whites (FBI data also indicates most Latinos are killed by Latinos) — she insisted again her tweet was taken out of context.
“This is all backed up statistics and facts. I think it’s really, really awful how the left thinks that statistics and facts are racist, so I don’t think anything I said was remotely wrong. I stand by every tweet that I post,” Zhu said.
She continued, “Of course, everyone has problems with their communities, and I completely understand that, but we have to empower women’s voices honestly to show that we could have different political opinions — and not just statistics and facts are racist.”
Following the interview, she thanked CNN in a tweet for putting her on air, but added, “Next time, please learn what ‘responding to another tweet’ means and the importance of staying on subject when having a dialogue.”

Despite remaining steadfast in defending the views she shares in her posts, one post appears to have been deleted. The Orlando Sentinel, however, published a screengrab of the February 2018 tweet, posted when Zhu was a freshman at the University of Central Florida, before she transferred to Michigan.
“There’s a ‘try a hijab on’ booth at my college campus. So you’re telling me that it’s now just a fashion accessory and not a religious thing? Or are you just trying to get women used to being oppressed under Islam?” the tweet reads. 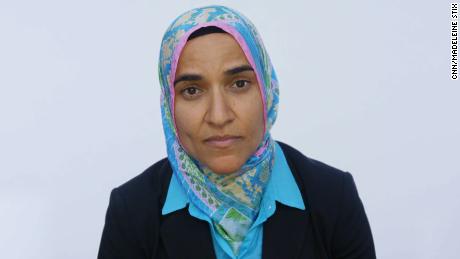 Dalia Mogahed: Millions watched her TED talk 01:10
Zhu was a political science major at UCF in 2017 and 2018, school spokesman Mark Schlueb said. He would not discuss her disciplinary record but said, “I can verify that the social media posts in question did not violate student conduct codes, and Ms. Zhu was not expelled from UCF.”
Speaking to CNN, Zhu called the hijab “a sacred garment” and likened a non-Muslim wearing a hijab to a non-Catholic carrying a rosary.
“There are so many women in Muslim countries right now who are being stoned to death because they don’t want to wear a hijab … and I think we should be focusing on that.
“There’s so many bad things happening in Muslim countries … and their women are being crucified for not wearing a hijab, and I think that’s really, really awful.”
In her response last week to Miss World America officials, she accused a Muslim woman of trying to force the hijab on her.
“A muslim woman tried to forcibly put a hijab on my head without my permission. I tweeted about it on my social media, and it got the attention of the media. Almost everyone was supportive of me refusing to be put in that situation,” she wrote in her letter to DeJack and others.
Zhu did not mention the claim during her CNN interview. 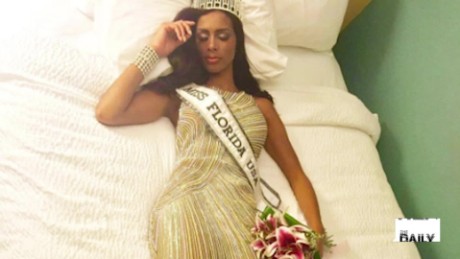 August 2016: Former Miss Florida seeks $15 million 05:31
“It’s disgusting how you would rather lie to the public’s face than be supportive of someone that is trying to make a difference by talking about subjects that no one dares to say,” Zhu says in her email to pageant officials.
“I am sure you will love to find a ‘woman’ who is cookie cutter perfect and says brainless comments like, ‘I love world peace.'”