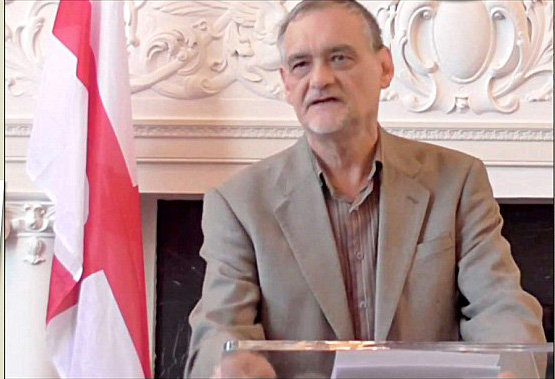 Mark Weber, an American historian and director of the Institute for Historical Review, was banned from Britain in April 2015 by order of Theresa May, who is now the country’s Prime Minister. The decision to ban him was “taken personally” by May while she was serving as Home Secretary, Britain’s Home Office has acknowledged.

As justification for the ban, her order cites three statements allegedly made by Weber, as reported in a sensational article in Britain’s Mail on Sundaynewspaper. After the exclusion order was issued, the paper publicly acknowledged that the first of the three statements attributed to Weber was never made by him, and that a portion of the second statement was likewise not by him.

Moreover, the second and third statements cited in the order are distortions of remarks Weber had made at a “London Forum” meeting on April 11, 2015 – as he explained in a letter to the Home Office of Jan. 9, 2018. (Full text below). That letter is a response to a Home Office letter to Weber of Dec. 22, 2017, and a Home Office file letter of April 29, 2015. (Facsimiles below.) 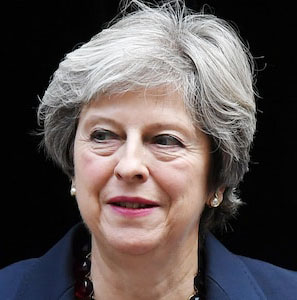 Theresa May
Home Secretary in 2015, and now Prime Minister

The text of Weber’s address, titled “The Danger and Challenge of Jewish-Zionist Power,” is posted on the IHR website, along with an audio recording. A video of the talk is posted on YouTube.

The “London Forum” gathering, which drew an audience of more than a hundred, received extensive but hostile coverage in major British newspapers, as well as by Jewish news services. Although media reports called the event a gathering of “Holocaust deniers,” in fact not a single one of the speakers at the meeting spoke about the Holocaust, or said anything that could be considered “Holocaust denial.”

London’s Metropolitan Police Force looked into the talks by Weber and the other speakers, and decided that what they said “does not reach the threshold for a criminal investigation,” the London Daily Express reported. The news that Weber and the other speakers “would go unpunished provoked outrage in the Jewish community,” the Express also noted. A spokesman for the “Campaign Against Anti-Semitism” organization, the paper reported, said that the “speakers should have been barred from the UK.”

“The decision to ban me from the UK,” says Weber, “was based on inaccurate, untrue or distorted claims from a sensational and hostile second-hand report. British authorities made no effort to check the accuracy of the statements cited to justify this ‘McCarthyite’ ban.”

“If authorities in, say, Russia or Poland or China, were to ban peaceful UK citizens from entering those countries on the basis of similarly sensational and inaccurate reports,” Weber adds, “British politicians and media commentators would understandably protest and voice their outrage.”

The current government of Prime Minister Theresa May is one of the most ardently pro-Zionist in British history. In a speech on Nov. 4, 2017, for example, she praised and defended the notorious Balfour Declaration of 1917, by which Britain pledged to support the Zionist campaign to establish a “Jewish homeland” in Palestine. That Declaration is widely regarded as a blatant betrayal by Britain of its often-proclaimed devotion to the principles of democracy and self-determination.

In April and May 2015 Weber persistently urged the Mail on Sunday to correct at least the most egregious errors about him in its report on the “London Forum” meeting. After exchanges of e-mail messages by Weber with the paper’s managing editor, John Wellington, and a face-to-face talk with Peter Sheridan, the paper’s correspondent in California, the Mail on Sunday in late May or early June 2015 added a “correction” footnote to its posted report that acknowledged that it had inaccurately attributed at least two quotations to Weber — quotations that were cited in the UK ban against him.

Mark Weber is director of the Institute for Historical Review (IHR), an independent educational and publishing center that works to promote peace, understanding and justice through greater public awareness of the past, and especially socially-politically relevant aspects of modern history. It is recognized by the U.S. Internal Revenue Service as a 501(c)(3) public interest, educational, not-for-profit enterprise. Founded in 1978, the IHR is non-partisan, non-ideological, and non-sectarian. Its offices are in Orange County, southern California.

Mark Weber holds Bachelor’s and Master’s degrees in history. In 1988 he testified for five days in Toronto District Court as a recognized expert on Germany’s World War II Jewish policy.

Weber first learned that he was banned from the UK on Sept. 23, 2017, at the international airport of Madrid, Spain, as he was about to board a flight to London’s Heathrow airport for a lay-over of a few hours before getting a connecting flight to return home to California. He was obliged to pay hundreds of dollars to arrange belated alternative flights back to the US.

After his return home, Weber wrote letters to relevant British agencies, including the Home Office, to learn more about the ban. It was not until January 4, 2018, that he received letters from the Home Office explaining just how and on what basis he had been barred from entering the UK.

The UK government routinely bans visitors “if their presence would not be conducive to the public good.” Although British authorities will not say just who is on its list of “excluded” persons, it is known that Edward Snowden, Martha Stewart, Louis Farrakhan, Pamela Geller, Michael Savage and Geert Wilders are among those who have been banned. 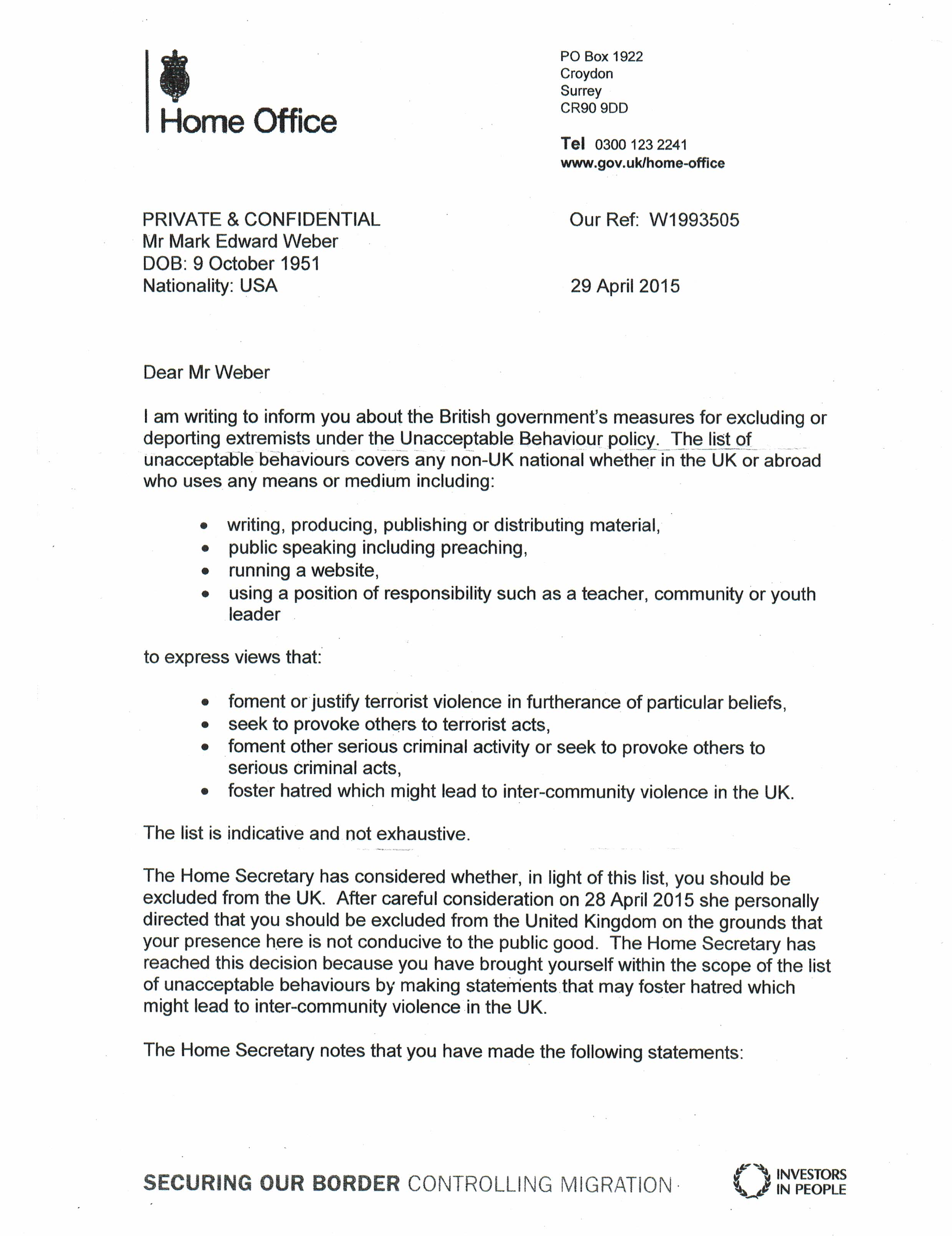 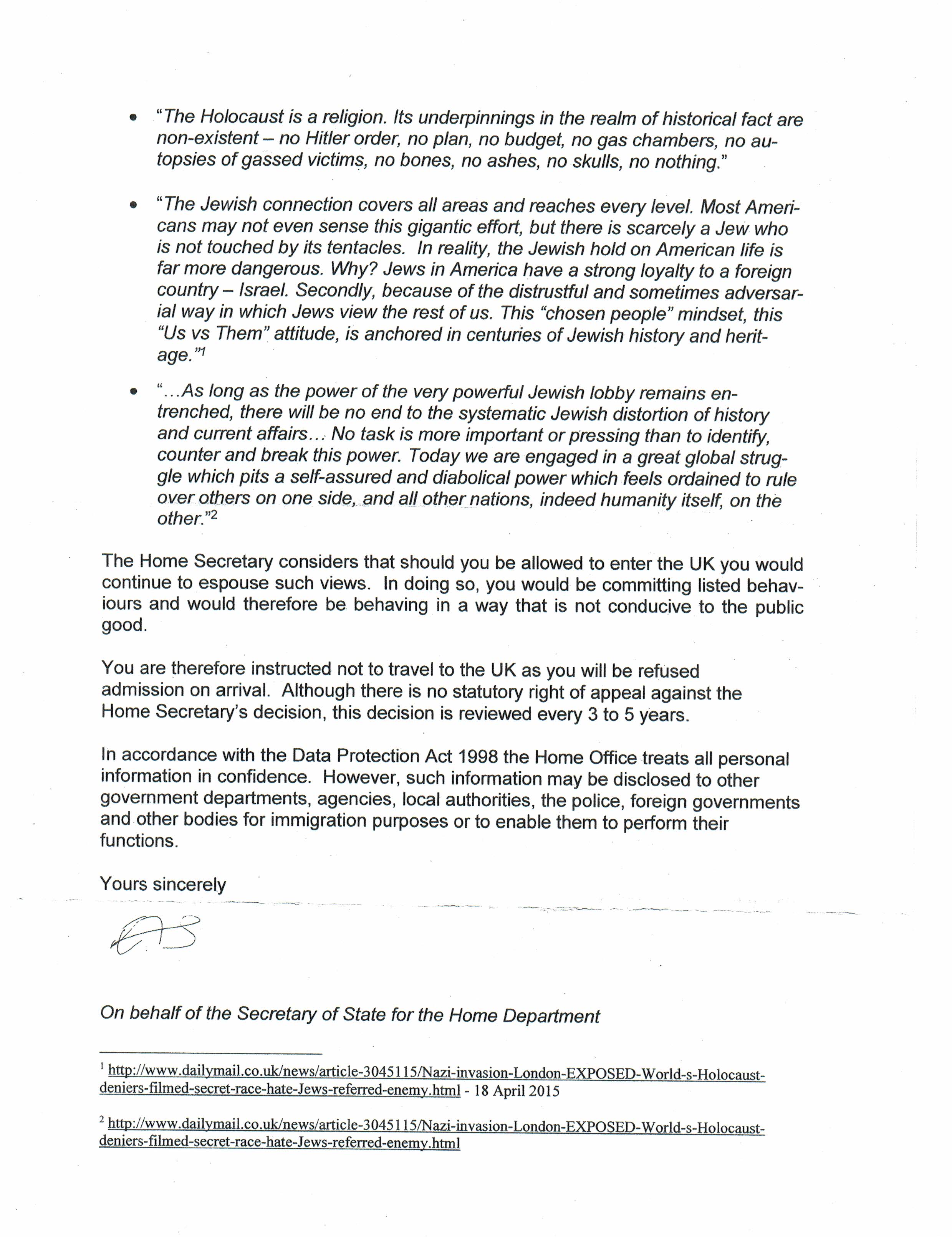 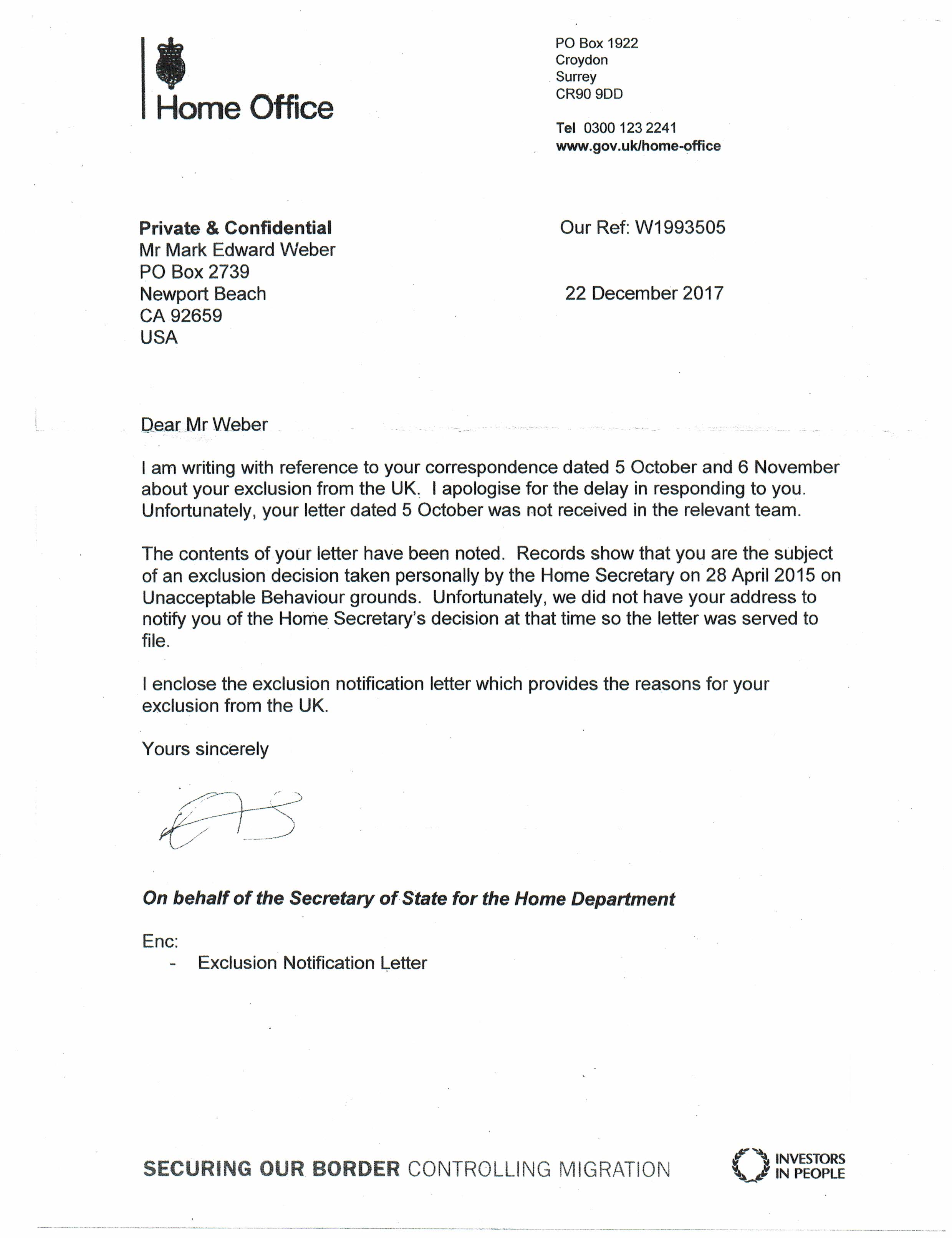 Thank you for your recently-received letter of Dec. 22, 2017 (copy enclosed) in response to my letters to the Home Office of October 5 and November 6, 2017. I also appreciate that you enclosed a copy of your letter or notice of April 29, 2015 (copy enclosed), which explains how and on what basis the decision was made to exclude me from the UK.

In your April 2015 letter, three statements attributed to me are cited as reason or grounds for the decision. You then write: “The Home Secretary considers that should you be allowed to enter the UK you would continue to espouse such views. In doing so, you would be committing listed behaviours and would therefore be behaving in a way that is not conducive to the public good.”

My main purpose in writing today is to explain that the decision to exclude me from the UK was based on second-hand information that is, at least in part, inaccurate, untrue or distorted.

The first of the three statements attributed to me in your April 2015 letter is this: “The Holocaust is a religion. Its underpinnings in the realm of historical fact are non-existent – no Hitler order, no plan, no budget, no gas chambers, no autopsies of gassed victims, no bones, no ashes, no skulls, no nothing.”

In fact, I never wrote or uttered those words, and I do not agree with them.

No source, or even a date, is given for this statement. To the best of my knowledge, it was first (inaccurately) attributed to me some years ago by the “Anti-Defamation League,” an influential US-based Jewish-Zionist organization.

The second of the three statements attributed to me in your April 2015 letter is this: “The Jewish connection covers all areas and reaches every level. Most Americans may not even sense this gigantic effort, but there is scarcely a Jew who is not touched by its tentacles. In reality, the Jewish hold on American life is far more dangerous. Why? Jews in America have a strong loyalty to a foreign country – Israel. Secondly, because of the distrustful and sometimes adversarial way in which Jews view the rest of us. This ‘chosen people’ mindset, this ‘Us vs Them’ attitude, is anchored in centuries of Jewish history and heritage.”

As your April 2015 letter makes clear, this statement, as well as the third one you cite, were attributed to me in an item, headlined “Nazi Invasion of London Exposed,” that appeared in the Mail on Sunday of April 18, 2015, which sensationally reported on a talk I gave at a meeting in London one week earlier. As your April 2015 letter notes, this item is posted online athttp://www.dailymail.co.uk/news/article-3045115/Nazi-invasion-London-EXPOSED-World-s-Holocaust-deniers-filmed-secret-race-hate-Jews-referred-enemy.html

The first two sentences of the second statement are actually not by me. As I made clear in my London talk, those two sentences were quotations from The Zionist Connection, a detailed study by Jewish-American scholar Alfred M. Lilienthal, issued by Dodd, Mead, a respected New York publisher.

The remainder of that second statement, as well as the third statement attributed to me in your April 2015 letter, are likewise distortions of remarks I made in my address at that London meeting.

The full text of my London talk is posted at: http://ihr.org/other/jewishzionistpower2015

A video of my April 2015 London address is posted online at: https://www.youtube.com/watch?v=PEJ0UUIaxF0

I was so concerned by the errors and distortions in that Mail on Sunday report, on which you have relied, that in April 2015 I sent an e-mail message to managing editor John Wellington to ask him to correct at least the most blatant errors. I also met in person with Peter Sheridan, the Mail on Sundaycorrespondent in California, to gain his help in correcting errors about me in his paper.

After several exchanges of e-mail communications with both Wellington and Sheridan, and some delay, the Mail on Sunday in late May or early June added a “correction” footnote to its posted report acknowledging that it had inaccurately attributed to me at least two quotations – quotations cited by the Home Office as grounds for its exclusion decision. Of course, that online Mail on Sunday correction was made after the decision had already been made to exclude me from the UK.

Although you mention that there is no “statutory right of appeal against the Home Secretary’s decision,” I urge you to inform the appropriate authorities that the April 2015 decision to exclude me from the UK is based on second-hand information that is, at least in part, inaccurate, untrue or distorted. I further respectfully ask the appropriate authorities to reconsider and rescind the decision to exclude me from the UK.