We have written often of Quebec’s problems with freedom of expression. We have received awards for those editorials. Particularly one in opposition to Quebec’s upcoming Bill 59 that would give the province’s Human Rights Commission more power to curtail expression. We have advocated for that freedom to Ministers in the face of government encroachment when everyone was silent. And we have won those battles too, especially important being the defeat of Quebec’s Payette Plan which would have imposed a government registry of – and language testing for – all journalists. But the struggle for the minds of Quebec’s opinion-makers – and its citizens – on this issue continues.

The latest chapter in this saga is the decision of the Quebec Human Rights Tribunal to order comedian Mike Ward to pay $42,000 to Jérémy Gabriel for jokes Ward made about Gabriel in 2010 that the Tribunal found “insulted Gabriel’s dignity” and that this was a violation of Quebec’s Charter of Rights and Freedom. The necessity for such a Tribunal – like that of the Quebec Press Council – in a free society, has been debated many times and is a subject for another column. What is troubling at this moment is how this decision has cowed certain media outlets and how wrong it was in law.

The decision has generally been condemned as a threat to free speech. But the comment of the editorial board of The Montreal Gazette stating that, “…the decision of the Quebec Human Rights Tribunal demonstrates that the right of free speech is not absolute, even in a democratic society…” cannot go unanswered. It was shocking and sad. Particularly because anglophone media has a responsibility to defend the very absolutism of freedom of expression in the face of Quebec’s discriminatory language laws that force linguistic minorities to tailor their speech to suit those very same laws that have been judged to violate international legal standards and indeed even UN covenants. The editorial also failed to recognize that the QHRC is not a court and failed to comment on the dangers of quasi-judicial organs of the state compromising due process – the essential guarantor of rule of law. 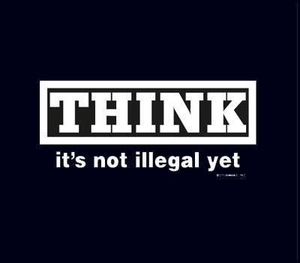 Freedom is indivisible. And freedom of speech – except for overt incitement to violence against a specific individual or group – is absolute. For any members of the fourth estate to give credence to any limitation of that freedom is an abrogation of their first and highest responsibility. The politically correct statism that is corroding our liberties and pushing so many to self-censorship was not only anticipated and condemned by Kafka and Orwell and Camus, but by President John Fitzgerald Kennedy when he paraphrased James Madison’s warning that, “I believe there are more instances of the abridgement of freedom of the people by gradual and silent encroachments by those in power than by violent and sudden usurpations.” This decision of the Tribunal is precisely an instance of an “abridgement of freedom” and the self-censorship implicit in the words of The Gazette editorial manifest that “gradual encroachment.”

Having said this, were Mike Ward’s jokes distatsteful. Yes they were. They were not a Don Rickles-like gadfly treatment. But that’s the point! As George Orwell wrote, “If liberty means anything at all, it means the right to tell people what they do not want to hear.” Ward was poking fun at Gabriel’s appearance. Gabriel is a singer and suffers from Treacher Collins syndrome that affects his physical appearance. The case is tragic. But the Tribunal was wrong to hear it as a matter of principle and totally wrong on the matters of law it decided on. Leading civil rights attorney Julius Grey stated that the decision is so totally erroneous that he will appeal the entire ruling and not just parts of it.

The Tribunal relied on three sections of the Quebec Charter in its decision. Section 3 guarantees, among other things, freedom of expression. Section 4 establishes our right to “dignity, honour and reputation.” Section 10 states Quebecers cannot be deprived of our rights because of certain social or physical characteristics. Several are listed, including race, colour and disability. In the Ward case, the Tribunal found that Section 3 clashed with Sections 4 and 10 and condemned Ward to pay moral and punitive damages. There is only one problem. The Charter is meant to apply to cases where an individual is before the law. It is written right there in the preamble of the Charter. In other words, the Charter is a protection for the individual against the state and before the courts. It is not an etiquette guide between each of us in our daily lives. It is meant to protect people from discrimination where laws have been broken. There is as yet, thankfully, no law against freedom of speech. Furthermore, the Charter specifies that freedom of opinion and freedom of expression are “fundamental freedoms.” The word fundamental is a term of law and puts those freedoms as primordial. Only Section 3 rights have this status.

The imposition of moral conformity through legal sanction is the stuff of tyrannies not democracies. It is important to fight the QHRC and it’s Tribunal on the Ward decision now because we will soon be facing a graver threat. Bill 59 will be voted on in the fall. Article 6 of the Bill would “give the QHRC the power to initiate legal proceedings before the Quebec Human Rights Tribunal without having to wait for complaints from the public.” Article 3 would allow members of an identifiable group as well as people outside the group to make complaints triggering suits for hate speech before the Quebec Human Rights Tribunal. The bill also continues the Quebec tradition of anonymous denunciations and commands a blacklist to be posted on the QHRC website of “offenders.”

What this kind of legislation does – what decisions like Ward do – is put free thought and free speech into deep freeze. It incites self-censorship. And worse. It makes Human Rights Commissions tools against the most precious of rights. Louise Richer, director for Quebec’s École nationale de l’humour, said the QHRC ruling symbolized a, “…politically correct era. I am incredibly worried by the precedent this has created,” Richer told Radio-Canada.

Not long ago, The National Post ran a lead editorial in which it quoted my words on this issue. We leave you with the words that the Post found so compelling. “Leaving decisions on issues of freedom to bureaucrats suggests two levels of citizenship on fundamental rights. One level for all of us, another for state agents who can limit our rights.”