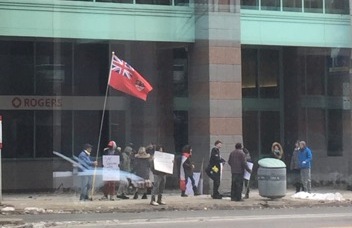 a number of groups, including the Canadian Association for Free Expression, the Canadian Nationalist Party and the Yellow Vests, rallied in support of fired broadcaster Don Cherry Saturday afternoon. The protest took place outside Rogers HQ, which owns Sportsnet and which fired the controversial broadcaster for pointing out last weekend that immigrants, who feast off Canada’s milk and honey and freedoms, should honour the veterans who fought to preserve these rights. Under the old Red Ensign, the flag of the Real Canada, they called for the reinstatement of this iconic hockey and broadcasting legend. Mr. Cherry is the latest victim of the “cancel culture” of political correctness.

Signs denounced corporate cowardice, the intolerant cancel culture and called for defunding the far leftist Canadian Broadcasting Agency that leeches over $1-billion a year to pump Cultural Marxist propaganda into our living room.