Your smear piece (Choir raises mighty voice against hate at Hamilton city hall, from groups like Soldiers of Odin)
n today’s SPECTATOR, as regards me is fake news and a lie.
I have corrected the EXPECTORATOR on several occasions: I am a White Nationalist NOT a White Supremacist. There’s a difference.
In your puff piece about Anna Wilson, with utterly shoddy journalism, you didn’t interview the people she defames with labels like “haters’ and “fascists”. In one sentence you proclaim: “Not as long as there are “hate” buses climbing the curb, white supremacists like Paul Fromm spewing garbage on the forecourt.” I doubt the bus called itself a “hate” bus. I have never spoken on the forecourt and thus haven’t “spewed garbage” or anything else.
It’s not even clear whether the torrent of abuse are your words or Anna Wilson’s.
Opposition to our country’s immigration policies is NOT “hate”.
Calling the Yellow Vests and Soldiers of Odin “hate groups” is a lie and a libel. To the best of my knowledge, neither has ever been charged under Sec. 319 of the Criminal Code (“wilful promotion of hate”), let alone convicted. They are not “hate” groups. Some people, like Anna Wilson or you,  may hate their political views but that doesn’t make these people, myself included, “hate groups”.
Your article demonizes good concerned citizens. I have no problem with Anna Wilson and her friends singing to promote their vision of society. Certainly the same respect should be accorded to those with other perspectives. I, for instance, exposed the injustice of precious spaces in our homeless shelters being given to illegals, while Canadian born citizens huddled in lean-tos and tents last year along Hamilton’s railway tracks. This is love, not hate, love for our own people.
Your article is inflammatory. In my few visits to the weekly Saturday protests, the only hate I’ve seen is masked cowards of Antifa shoving and elderly protester and ripping her sign and several Antifa smashing at the back of my car. [This was captured on video.]
Sincerely,
Paul Fromm 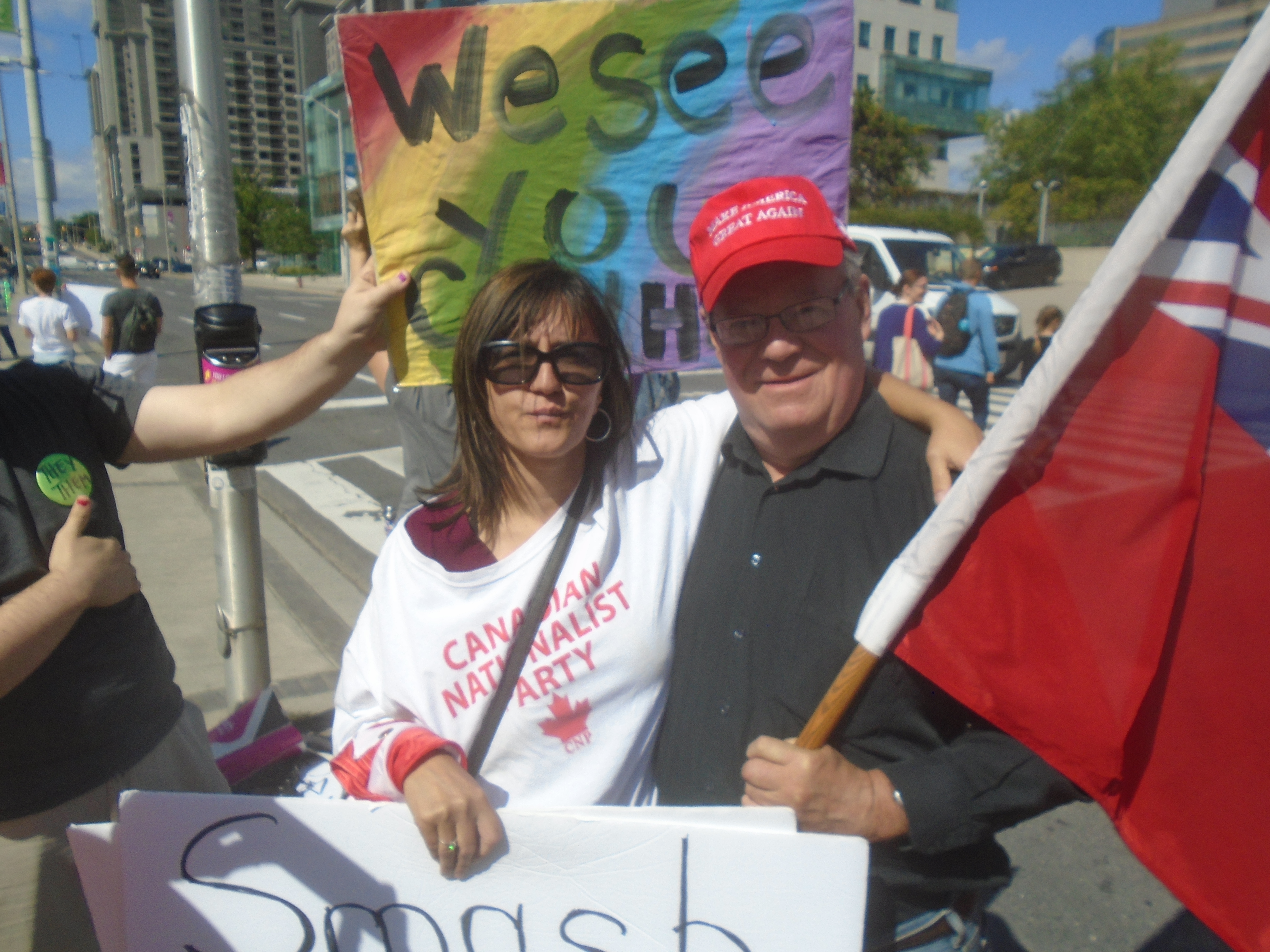 Choir raises mighty voice against hate at Hamilton city hall, from groups like Soldiers of Odin

Anna Wilson was becoming increasingly alarmed at the threatening and abusive ways, of hate groups at city hall gatherings. She turned to the collective power of song and music. So was born the Love In The Hammer choir.

How does that saying go? All it takes for hatred to triumph is for good people to … not show up at Hamilton city hall on Saturdays and oppose bigotry, by singing out their love; love louder than loathing.

Fortunately for this city, there’s no chance of people like Anna Wilson and Nicole Smith not showing up. Not as long as there are “hate” buses climbing the curb, white supremacists like Paul Fromm spewing garbage on the forecourt, Yellow Vesters blocking light, or the Soldiers of Odin generally trying to intimidate.

They will be singing — as they do — songs of acceptance, affirmation and protest. Songs like “Lead With Love and Resilience”, from the Justice Choir songbook. They will be singing to expose, by contrast to their music and informed voices, the utter noise, nonsense and disgusting drivel that passes for free speech among the far right and hate groups; expose it for what it is.

It was Anna Wilson’s experience of that viciousness, in word and behaviour, by the “haters” who appear at city hall, that inspired her to start the Love in the Hammer choir in the first place. The “hate” bus was the trip wire.

“Not a hundred feet from me this school bus, driven by a Yellow Vest supporter wearing military fatigues, was driven up onto the city hall forecourt toward a crowd of residents celebrating diversity,” she recalls. “It was like it was happening in slow motion.”

Frustrated at the challenge of channeling the feelings and anxieties produced by the confrontational nature of what was happening at the rallies, Wilson hit on the idea. Collective song.

And so started the Love In The Hammer choir. They’ve been meeting and singing at the rallies every Saturday since late August. And their popularity is growing, a way to sing back at the fear.

And the fear is there. After the hate bus, there were the Soldiers of Odin. And Fromm. People who aren’t at city hall at the Saturday anti-hate rallies often don’t see how bad the fascists are, says Wilson.

“No one feels safe,” agrees choir member and community advocate Nicole Smith. “They (the haters) use dogwhistle tactics, outward shows of patriotism,” like wearing seemingly innocent I Am Canadian T-shirts to create a semblance of normalcy but then sew conflict, hatred and aggressiveness at the gatherings. Smith adds she’s patriotic herself but would never use patriotism as a code for hating others.

Editorial: Voters have a right to know the cost of…

And so people who are there protesting, rallying or simply celebrating diversity have been joining in the singing, adding their voices to the swell. Some are too shy or uncomfortable to join the chorus but nonetheless express their support and thumbs up for the positive feeling the singing brings to the weekly gatherings.

“How do we respond to the meat grinder of horrible ideas (and behaviours of the hate groups)?” asks Wilson. “Is there another vision (aside from direct confrontation)?”

Yes, they decided, and that vision is song, music and choral togetherness. “We wanted a space for something positive, something against the negativity,” says choir member Rachel Cuthill.

“Some people are asking why they don’t see as many children at the rallies as there used to be. The children were asking, ‘Why are those people yelling? Why are they (the hate groups) so mean?” There were also reports of one of the fascists spitting on the heads of one of the anti-hate rallier’s children. Cuthill herself says she heard a hate group threaten to “break the necks” of an LBGTQ+ woman and her child.

The choir members say they hope the music will help create a climate more hospitable not only to children, who can learn important values at such events, but others concerned about safety. Says Cuthill, “singing is something different from chanting. It implies caring.”

But, aside from that, the choir, with its many voices and instruments, can also create volume, against megaphones and hate speech.

“So we literally ‘deploy’ the choir,” says Jason Allen. He sings and plays guitar and mandolin with the group. And “deployed” they will be on Sept. 29 at Mohawk College, responding to Bernier’s controversial presence there.

The singing can also be exhausting, says Wilson, for they’re singing loudly, joyously and also for a long time. Often, they say, the offensive groups try to wait out the ralliers and show up at 12:30 or 1.

“It feels good to counter toxic messaging with songs of love. Our voices are stronger together. We will not let the hate go unopposed,” says Wilson.

And what about you?