The Truth: On Tuesday October 16, 2012 a breach (of bail conditions) charge dating from 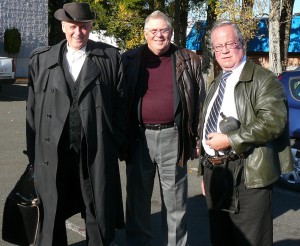 August 5, 2009 was stayed by a judge in Regina. Terry Tremaine was allegedly in breach of a bail undertaking because of a posting on STORMFRONT.org which supposedly was made on July 22, 2009. Under his bail conditions, Mr. Tremaine was not then to access the Internet, except to seek help in preparing his case. The night before he was to appear on a contempt of court charge in Regina, based on a complaint by Richard Warman, he posted his proposed statement of defence, seeking last minute advice from the STORMFRONT community. Because the Commission had never notified Mr. Tremaine that the Tribunal order had been registered in Federal Court and, thus, was now a Federal Court Order), they adjourned the proceedings sine die, without letting Mr. Tremaine know, the day before.

Mr. Tremaine’s bail conditions, however, stemmed from a “hate law” charge under section 319(2) of the Criminal Code. dating from January 23, 2008. This charge, too, has been instigated by Richard Warman. Mr. Tremaine was charged with “breach of undertaking and jailed for 22 days in August, 2009, before he could obtain bail.

The breech charge was to be heard, October 16. However, on September 6, Court of Queen’s Bench Judge Frederick Kovach stayed the Sec. 319 “hate” charges. Thus, the “breech” charge became irrelevant.

The CBC story is a mine of bias and misinformation. It states: “A Regina judge has stayed a charge against Terry Tremaine, who was accused of continuing to post hate speech online in defiance of an order from the Canadian Human Rights Commission. In 2007, the commission ordered Tremaine to stop posting anti-Jewish material on the Internet.” As already explained, the Regina judge didn’t clear Mr. Tremaine of defiance of a 2007 Canadian Human Rights Tribunal (not Commission) order. The CBC’s garbled version understates the full ruthlessness of the bail condition. Mr. Tremaine was not enjoined from posting “hate speech”; he wasn’t allowed to post ANYTHING, except to seek assistance with his defence.

While we wish it were true, it is not, when the CBC reports: “With a stay of proceedings, Tremaine is no longer before the courts over the allegation of disobeying the commission’s order.” The CBC rightly identifies Richard Warman as the complainant behind the charge of contempt of court, or, as they put it, “disobeying a tribunal order.” That charged has not been stayed. Mr. Tremaine was acquitted in November 2010 of criminal contempt (against a Federal Court order) at the divisional level of Federal Court but was found guilty in September 2011 of civil contempt (against the Human Rights Tribunal’s order) at the Federal Appeals Court.

The Canadian Human Rights Commission and Richard Warman had appealed Federal Court Judge Sean Harrington’s decision acquitting Mr. Tremaine.The Supreme Court did not grant leave to appeal. So, the matter was returned to the divisional court for sentencing. The sentencing hearing on that matter occurred in Vancouver, October 9 and 10, and the presiding judge, Sean Harrington, has reserved judgment.

__ Here is my donation of $_______ to help CAFÉ’s Fall campaign for free speech across Canada.

In 2007, the commission ordered Tremaine to stop posting anti-Jewish material on the Internet.

In 2009, Richard Warman — who initiated the complaint against Tremaine — said in an affidavit that Tremaine is disobeying the order and was, at that time, continuing to post material that advocates the extermination of the Jewish community and also attacks blacks and other non-whites.

With a stay of proceedings, Tremaine is no longer before the courts over the allegation of disobeying the commission’s order.

It is the second time this fall that a charge against Tremaine has been stayed.

In September a charge of promoting hatred was discontinued because the judge said the case took too long to get to trial.

Tremaine is a former math instructor for the University of Saskatchewan.