Gordon Watson Demands Apology & Compensation from the Waddling Dog for Assault & Denial of Rights: THE BATTLE OF THE WADDLING DOG, Part IV

Below is the letter which I dropped off tonight (June 22, 2016), addressed to the owner and managers of the Wadding Dog Quality Inn. as I handed it over to the lady at the front desk, I asked ‘will this get to the owner or to Brandon?” She replied :’I’ll put it in his basket. Brandon will probably get it. They’re father and son” Gordon Watson …………

To : owner and managers of the Waddling Dog Quality Inn Mount Newton Cross Road Central Saanich British Columbia From Gordon S Watson 01 I am more than a bit disgusted with what played-out in an incident at your hotel on June 18 2016 : police power was mis-used to prevent legitimate political activity. What I want to know, is : ‘who’s responsible for the outrageous interference in my civil rights?!!!!!!!’

02 The BC Human Rights Code states that its purposes are to foster a society in British Columbia in which there are no impediments to participation in the economic, social, political and cultural life of British Columbia. As explained in my letter to the Central Saanich Police, [ enclosed ] Brandon Petraroia, acting as your Agent, did offend the core principle explicit in that statute

03 Not long ago, a Justice of the Court of Appeal called me “ a long-time political activist”, (which I consider a high compliment). Since 1991 I have been around the block a few times, getting exposure on issues of national importance. In 2001, I was on the ballot as a candidate for MLA in the provincial election. Thus, I certainly do qualify as a ‘politician’.

04 Early in the day on June 18th 2016 Paul Fromm called me to say that the meeting which he’d arranged for 2 pm was cancelled by the management of the Waddling Dog. I said I’d go to the hotel so as to direct anyone who showed up for it, to the changed venue. When I got there, I was dismayed by the show of force = armed uniformed men guarding the Library. I ditched the notion of having any kind of dialogue with the man who presented himself as “the owner” direct quote. Over my 2 decades’ experience in political activity, I’ve been involved in confrontations much more ominous than that one. The attitude displayed by Brandon Petraroia – gloating at having sabotaged our meeting – conveyed that he was spoiling for a physical confrontation.
05 As explained in my letter to the police, when I failed to confirm his assumption that I was there to cause trouble, and started to leave, Mr Petraroia shoved me. There is no doubt in my mind but that that contact was calculated to provoke reflexive reaction, which he’d then use as pretext for the police to arrest me. One wonders if he learned that dirty trick in the curriculum of the hotel management course at Royal Roads University. More likely, it arose from his experience playing ice hockey, where such a move is acceptable among consenting participants. Then again, from what I see on the internet, apparently the hotel’s team = The Greasers (!) = play in a co-ed league … so he wouldn’t get away with that kind of a body check  either. 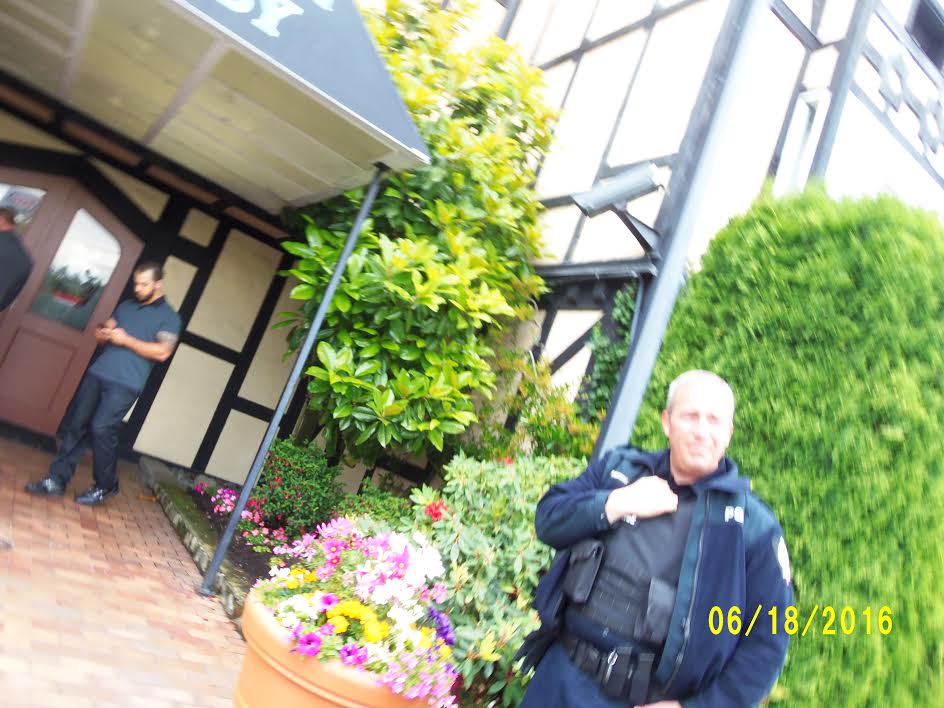 Variously self-identified as “manager” or “owner” of the Waddling Dog, Brandon Petraroia is in the background. Central Saanich cop one of a group on hand to prevent free speech meeting, June 18 in Victoria.

06 Your manager committed serious breaches of the law. One of the maxims I’ve learned along the way in my career, is : “make the courtroom the classroom”. He breached the BC Human Rights Code. He committed an assault. For which he, the Agent – and his Principal, the Waddling Dog – are liable for a claim of damages for tortious interference with my civil rights. If you fail to treat this my complaint fairly, we’re headed for Court

07 But we don’t have to go that route. Mr Petraroia’s misconduct demonstrated how far-removed his generation is, from understanding what – once upon a time – was common sense in the white, Christian nation known as the Dominion of Canada. Today, stupified by Marxist propaganda inculcated by the Public Fool System, they mouthe platitudes about “tolerance” and “diversity”, while doing the very opposite … automatically demonizing people like me and Paul Fromm as we attempt to reach the conscience of the nation.
08 Ironically, the topic of the meeting was ; potential change in the law, criminalizing criticism of particular communist doctrines. So Mr Petraroia’s actions are a perfect example of what my old man used to say : “ nothing is so useless it cannot at least be used as a bad example.” We have yet to get any good reason why our group was denied service normally available to the public. I am left to surmise that it was because our political enemies poured the usual slanders into the ear of Brandon Petraroia, which moved him to call the cops. The photo of armed policemen stifling freedom of speech speaks volumes. The capper being Sgt. Sihota’s reply when I asked him “who called the police and why?”. Ie. “we’re here to keep the Peace. To make sure everyone is safe” Safe from what, pray tell?! The photos of Thought Police on the job on your premises illustrate Joseph Stalin’s diktat : “Ideas are weapons. Why should we let our enemies have such weapons?” 09 This letter is my offer to the Waddling Dog Inn / Brandon Petraroia that my complaints can be resolved using common sense. For that to happen, I require: – an acknowledgment of wrongdoing – an apology – a significant sum of money payed to me in Silver Canadian Maple Leaf coins
10 If I don’t receive acknowledgment of my offer by July 31st 2016, I shall submit a formal complaint to the BC Human Rights Commission, as well as : I will lay a Private Information of the charge of ‘Assault’, as well = I will originate a claim in Supreme Court of British Columbia for damages for tortious interference with my civil rights, such claim to be tried before a jury.