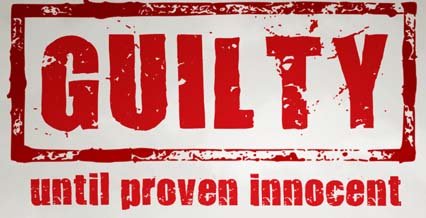 Imagine you are the parents of three young children.

Imagine one of those children runs and falls into your precious little girl, landing harshly on her head.

Discovering your child’s injury, you rush your child to the hospital where you expect your child will immediately receive the medical attention she requires.

Never in your wildest nightmares would you believe that this act, caring for the well-being of your child, would be the beginning of a 4-year nightmare at the hands of medical professionals, Child and Family Community Services, the RCMP and the criminal justice system.

It is utterly inconceivable that you would be arrested, interrogated for hours while police ignore your pleas to find out how your injured child is; you are charged with criminal charges and have your children taken from you and placed in foster care… all based on the word of a social worker and a doctor.

Both you and your wife cry your innocence to anyone who will listen.  Nobody does.

Police tell you that you will never see your children again unless and until you tell them “the truth” about what you did to your child.   The problem is that nobody wants to hear the truth as it doesn’t fit with their pre-determined conclusion of your guilt.

A fourth child is born during this horrific tribulation and to your horror that child too is stolen from you by government workers drunk with the power of the state.

That is the barest outline of the nightmare BC’s Paul and Zabeth Bayne lived through at the hands of a system that refused to accept the truth: they never harmed their child.

For a full description from Zabeth Bayne herself, watch the video below as Zabeth and Paul Bayne are awarded the George Orwell Free Speech Award for 2012 by Victoria lawyer and Free Speech advocate Douglas Christie.

Now, why is a couple who were put through hell by a government agency deserving an award for Freedom of Speech?  It’s not for the ordeal they went through, although that was truly horrific; it’s for how this brave couple responded to their persecution.

They patently refused, at every turn, to accept the presumption of guilt heaped upon them by every level of government and our justice system.

After their family was finally reunited after 4 long years apart, the Baynes decided they were not willing to allow their ordeal to happen to another mother and father.

They founded an organization, Evidence Based Medicine and Social Investigation, to educate parents, health care workers, police and government bureaucrats in the realities of childhood traumatic injury and to the simple fact that there are many, many more explanations for childhood injuries other than what some doctors, bureaucrats and legislators would like to believe.

Evidence Based Medicine and Social Investigation was founded in the wake of their victory against a system that presumed them guilty.

They now host an annual conference bringing together parents, doctors, police and legislators in an effort to educate them all, so that the nightmare the Bayne family lived through won’t happen again.  (Visit their Facebook page)

Here is the Canadian Free Speech League’s Douglas Christie presenting the 2012 George Orwell Free Speech Award to the Bayne family and Zabeth Bayne’s own recounting of their horrific story.