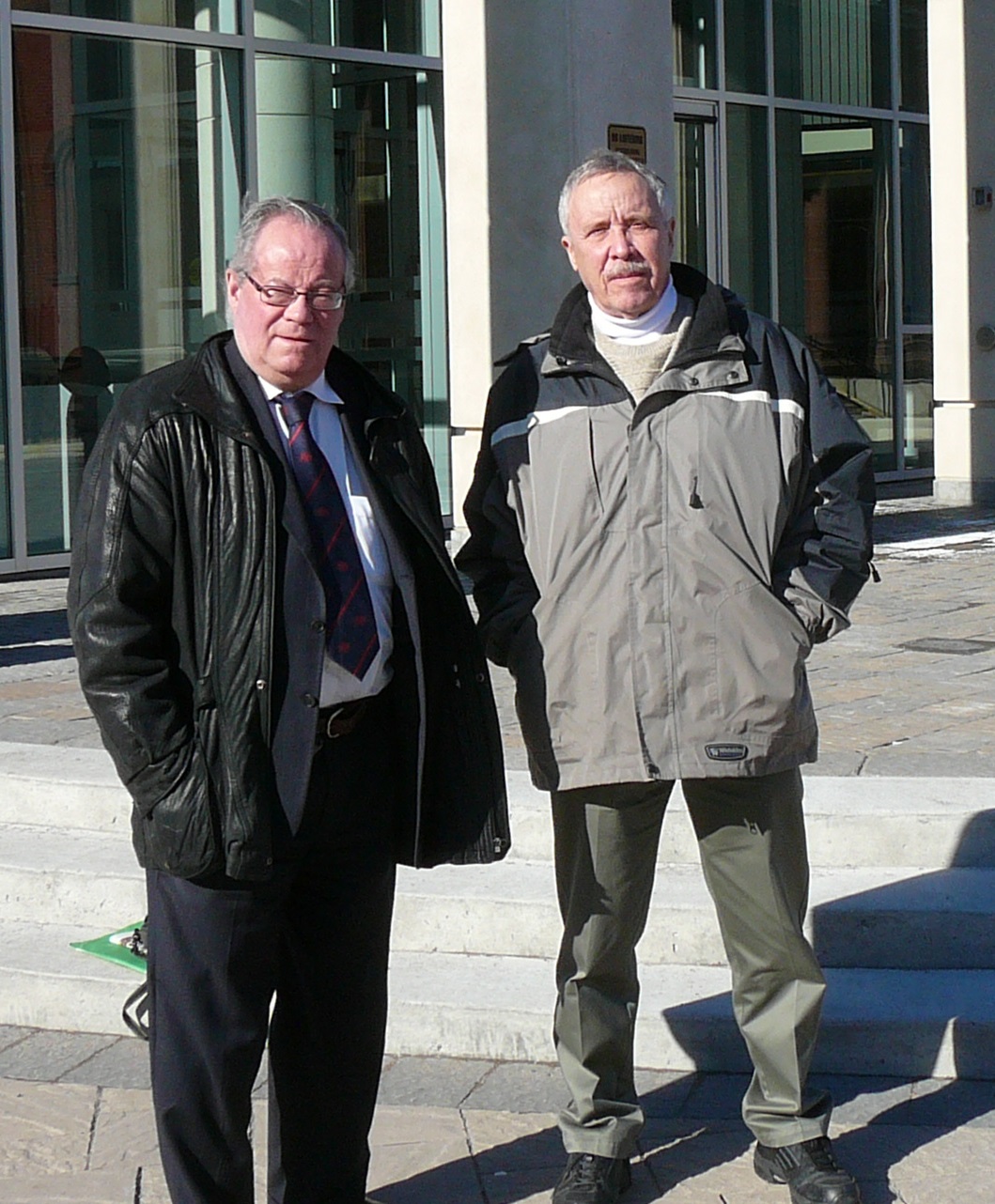 Happiness may seem a strange topic for me to raise in my report to you. However, on January 27, I was standing in the lobby of the Courthouse in St. John, waiting for John Hughes, lawyer for the McCorkill Estate, and CAFÉ’s lawyer Andy Lodge. The hearing  in regards to  efforts by powerful forces to hijack the McCorkill will’s bequest to the National Alliance as “contrary to public policy” was over and the decision in the hands of the judge. We were in the middle of a media scrum. With me was former teacher Malcolm Ross and his brother. I saw the lawyers for the four parties seeking to overturn the will walk by.

I wondered whether they were happy. I wondered this because beside me stood a man who deep down is serene and happy. Twenty years ago, Malcolm Ross was removed from the classroom in Moncton because of his political and religious views published in books, booklets and letter-to-the-editor on his own time. A “human rights” (they do not include free speech) tribunal had ruled that Mr. Ross’s very presence, as a conservative, anti-Zionist Christian, created a “poisoned” environment. The person complaining against him was the daughter of a prominent Atlantic Jew. She claimed some students had made anti-Semitic comments to her. Now, she did not attend the school where Malcolm Ross taught. He had not taught her. She had never met him, Nor had he taught the students who allegedly made comments to her.

Neither reason nor common sense mattered.  Mr. Ross had poisoned the environment and he was out. The case, argued by Doug Christie, went all the way to the Supreme Court. The Supremos even back then were hard core Christian haters. Sure, they agreed, Mr. Ross had the right to his religious views, just not the right to express them and hope to keep his job. The same nine Cultural Marxists would, a decade or so later, dream up the obligation of “reasonable accommodation.”  If some Sikh wants to pack his dagger to go to school, despite a zero weapons policy, we must make reasonable accommodations for his peculiarities. But, in this environment of inclusiveness and “reasonable accommodation” there was no room for a Malcolm Ross. All the while, Mr. Ross was reviled in a host of news stories and was even the object of semi-obscene cartoons that mocked his Christian faith.

So, Malcolm Ross, with a young family, was out of a job. It would be understandable if he were bitter or angry. But, he picked himself up, did other work and persevered. His deep Christian faith and belief that what he had written was true and right make him a serene and happy man. Not jumping up and down happy as a person who has just scored a big win in a lottery might be, but profoundly secure and happy.

I too felt elated that what CAFÉ had done with our very costly intervention and the powerful factum (brief) and presentation of our lawyer Andy Lodge would have a good effect. We had come to preserve a man’s right to pass on his estate to a group whose views might be unpopular or politically incorrect. I wondered how the lawyers on the other side felt. On one level, happy, I suppose because they could pocket fat fees from their well-funded backers. But how could they feel about trying to hijack a will and replace a man’s wishes with the politically correct whims of the moment?

We are already deep into the McCorkill case. This case MUST be won or meddlers and troublemakers may try to hijack a bequest to any group. We have made a strong case and await the judge’s decision.

I was asked to testify last September at the Warman v Mark and Connie Fournier libel trial. It went dreadfully wrong. The Fourniers and two other bloggers lost and were hit with a judgement of $143,000, which included hefty costs to pay Richard Warman’s legal bills. They are appealing. Canadian libel law is so loosey goosy that a website owner can be made liable for comments posted by anonymous writers on the site. Another libel case involving the Fourniers is now in progress. Marc Lemire reports: “Defamation law in Canada is a glaring example of the archaic state of our laws. This week in an Ottawa courtroom, two Internet bloggers – who both use pseudonyms – are going to state their case before a judge.  In one corner is the defendant, an inveterate blogger who uses the pseudonym Peter O’Donnell (AKA Roger Smith) who is being sued for saying that another pseudonym “Dr Dawg” (AKA John Baglow) is “one of the Taliban’s more vocal supporters”.  And caught in the middle are Mark and Connie Fournier who ran a message board called FreeDominion, where one alias apparently defamed another alias in a back and forth message thread.” CAFÉ is beginning to lobby for changes to this law.

CAFÉ continues to publicize Brad Love’s 11-year ordeal and efforts to continue to gag him. I have had articles published in a number of papers about his plight. Canada continues to back and publicize Terry Tremaine’s 10 year battle against Sec. 13 “human rights” (Internet censorship) and Sec. 319 (“hate law”) charges. The Sec. 319 charges were stayed in 2012, thanks to Doug Christie’s heroic efforts. On May 28/29, the last episode in his case will be his appeal against his sentence in a “contempt of court” charge brought against him, as were all the others, by Richard Warman.

And, of course, there is Arthur Topham. As of March 13, he faces a full blown trial on “hate charges” for comments, some of them satirical, on his website Radicalpress.com. He is also threatened with horrific bail conditions, including having to shut down his Radicalpress.com website and to post NOTHING on the Internet. CAFÉ will be helping and advising him at the hearing date, April 9 in Quesnel, British Columbia. The date for the trial has not yet been set.

One of our biggest challenges is to alert more people to the free speech cause – to turn them on to freedom and to make them aware of the very real threats to free speech and free thought in Canada. We have already held meetings in five provinces – New Brunswick, Quebec, Ontario, Alberta and B.C. this year. Our publicly advertised meeting in St. John attracted a number of new people to the cause.

We are proud of the CAFÉ website that we were able to construct because of your generosity – http://cafe.nfshost.com.

And the well deserved praise “generosity”  brings  me to my request that you continue to support CAFÉ. None, and I mean none, of this activity is possible without the resources, without your financial support. We had initially budgeted $10,000 for the McCorkill will intervention. The costs have ballooned and now top $30,000. Many years ago, when I was much younger, a pompous old man wagged a finger at me and pronounced: “If it’s about freedom, it should be free.” What a fool!

Those seeking to crush free speech spend large sums of their money and the public money to pursue their goal. Similarly, defending freedom has serious costs – people’s energy, people’s time, people’s courage and, yes, the funding to make the activities possible.

I know, as in the past, I can count on your support and generosity. Please use the enclosed coupon and post paid envelope.

__   Here’s my special donation of _____  to help  CAFE pay off its legal bills in the McCorkill will case.