ST.JOHN, NEW BRUNSWICK. January 27, 2014. “Where is the McCorkill case being heard?” I asked the court officer just before 9:30 this morning here in St. John.

“Is this our lucky day?” I wondered.

The atmosphere inside Courtroom 13 was more frigid for freedom of thought than the bitter Maritime winter outside the courtroom. This morning lawyers argued that the will of the late Professor Robert McCorkill giving a bequest to the White Nationalist U.S.-based National Alliance be set aside. It was like an Anti-racist Action meeting with slogans of “neo-Nazi” “White supremacist” and “racist” snapping through the air in the Court of Queen’ Bench. There was a lot of “hate” in the air or, at least, how much certain people hate “hate.”

Moncton lawyer Marc-Antoine Chiasson led off the complainant’s case before Judge William T. Grant. He represents the long-estranged sister of the late Robert McCorkill who brought this current action to nullify the bequest. She turned up or was found after being silent during the nine years since her brother’s death, after the militantly anti-free speech U.S.-based Southern Poverty Law Centre (SPLC) found about about the bequest soon after the will was probated in May, 2013. The exceedingly well-funded SPLC, an arch enemy of the National Alliance, went on the warpath to stop the bequest. The only problem for them was that they have no legal standing in Canada. Ottawa lawyer Richard Warman was soon being quoted in the press commenting that the bequest should be nullified because I was contrary to public policy. Isabelle McCorkell [yes, different spelling] emerged and, although she claims to live on $1,000 a month hired a pricey Moncton law firm to obtain an ex-parte injunction freezing the assets of the will and then a further application to nullify the bequest. Piling in to support her were the Attorney General of New Brunswick , the League for Human Rights of B’nai Brith and the Centre for Israel and Jewish Affairs.

” This is an unusual case,” Mr. Chiasson noted. And then the smears and name-calling began: “The Court must decide whether it is acceptable or appropriate to leave a bequest to a White supremacist, neo-Nazi organization that wants to rid North America of Jews.”

“We should not be able to interfere with a will on a whim because we don’t like the beneficiary,” he added. [Then, why are we here? I wondered.]

However, he added, “there is a certain line that cannot be crossed, but the line has been crossed with the bequest to the National Alliance and we ask this Court to intervene.”

“The Court should intervene in very few cases,” he admitted. However, an exception should be made for “hate propaganda” and “hate groups.” He quote Mr.Justice Cory in the appeal to the Federal Court of Appeals in the Don Andrews “hate law case” back in the 1970s. The judge had said that “hate meant the instilling of detestation in others and does incalculable damage to the Canadian community.”

“Sec. 318 and 319 of the Criminal Code prohibit ‘hate propaganda’ and the promtion of genocide,” he added.

The three lawyers arguing for the application repeatedly demanded suppression of people and views their clients didn’t like. “Any group that promotes views contrary to the human rights codes is unacceptable,” Mr. Chiasson announced. “The International Convention for the Elimination of All Forms of Discrimination condemn all groups that promote the superiority of a race and the participation in or financing of such groups,” he added. [Did Canada or its Parliament knowingly sign on to such a mental straight jacket.]

“Multiculturalism and equality are the linchpins of the Charter of Rights and Freedoms,” he said. The Charter, it might be noted, for all its talk of “equality” grants special privileges to favoured minorities. 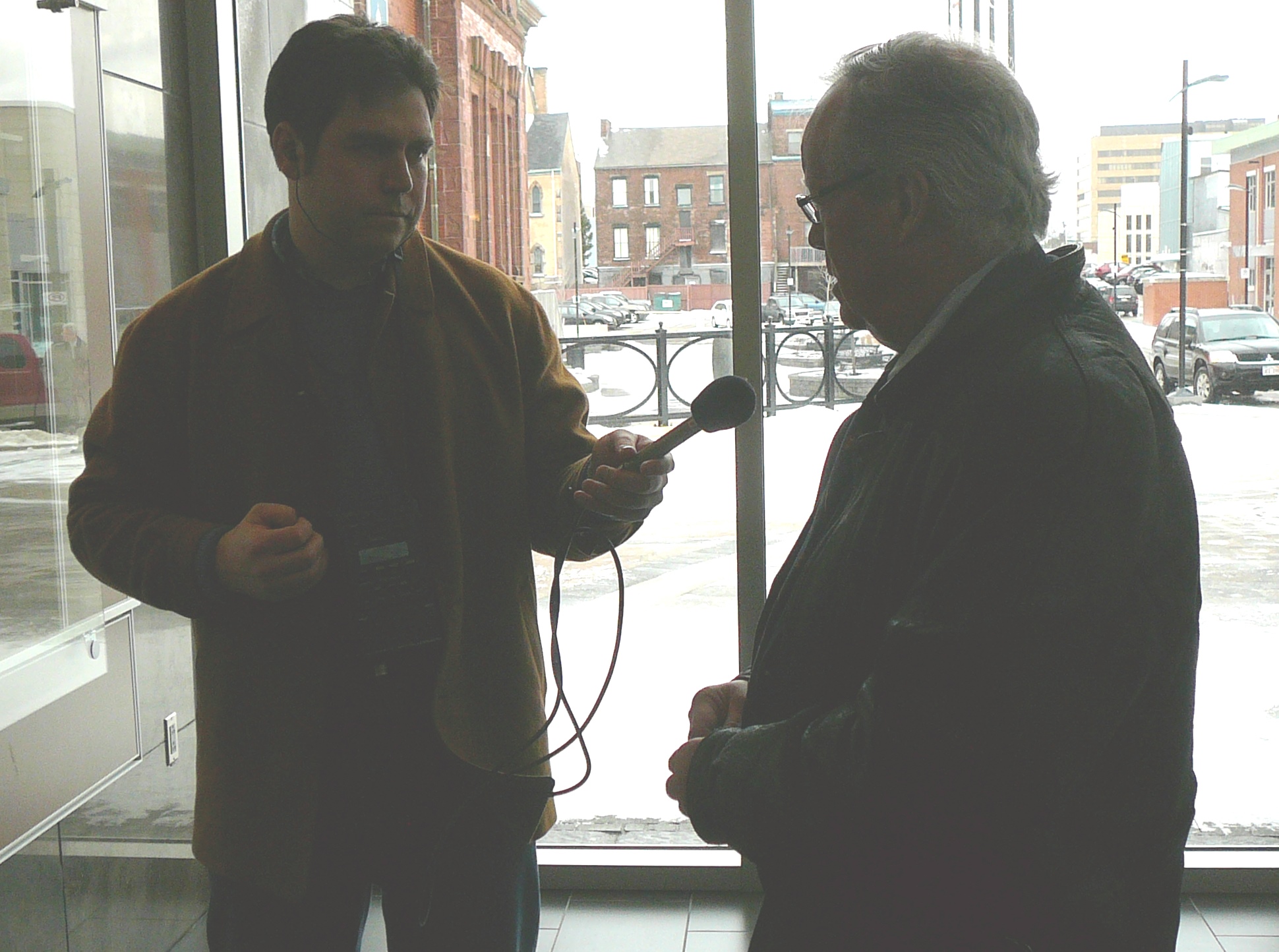 Paul Fromm being interviewed by Neville Crabbe of CBC News

“We just can’t stop ideas at the border due to the power of the Internet,” he complained.

Apparently, dissenting in certain historical debates is against the law, at least in Mr. Chiasson’s submissions: “The National Alliance says ‘the holocaust is a myth’. This is hate speech and contrary to public policy.” He expressed further shock at a comment by the National Alliance: “We have a debt of gratitude to Adolf Hitler who was the greatest man of our era.” [One wonders whether we’d be in Court with a two volume record o fwell over 600 pages of submissions and exhibits if the National Alliance had hailed Joseph Stalin or Mao Tse Tung or even Pol Pot as the greatest man of our era.]

No evidence had been adduced of homicidal inclinations on the part of the NA, but, Mr. Chiasson concluded: “The sole purpose of the NA is promoting hate and killing non-Whites, its sole objective is to create White living space, and, thus, it offends public policy. The gift is illegal and against public policy and should be voided. Mr. McCorkill should be declared intestate and, therefore, my client and her brother would be the beneficiaries of the estate.”

Next up was Richard Williams of Fredericton, representing the Attorney General of New Brunswick. “|Our only interest in this matter is our belief that the bequest is illegal and contrary to public policy,” he said. A strong voice for repression, he declared: “The theme of the Charter and human rights codes is that racism will not be allowed in this country.” He professed himself upset at the notion of “White living space”, although he made no mention of native land claims or special lands for Indians or Eskimos.

He added “there is no redeeming merit” in the National Alliance. Attempting to answer an argument in CAFE’s brief that nullifying the McCorkill will could launch a flood of similar litigation, he concluded: “I never expect to have a case like this again in my career.”

The final presentation of the morning came on behalf of another intervener, the League for Human Rights of B’nai Brith. Representing B’nai Brith, Catherine Fawcett insisted: “The National Alliance has a presence in Canada and is well known to the League.” Whether the NA has actually committed acts of violence “doesn’t matter. They put out ideas that incite hate. Their membership is restricted to White people who support the objectives of the NA. [One wonders whether certain Jewish or Catholic groups might not similarly be restricted to adherents of their faith who support the group’s objectives.]

“What you read in their Handbook,” she charged, “is we will recruit and build infrastructure for final victory. But you must read between the lines. A further danger of the National Alliance is a video game they produced called Ethnic Cleansing,” she added. She didn’t explain what it was about.

“In the NA Handbook, they say: “The holocaust story in engineered by Jews or is full of exaggerations.’ This is contrary to Canadian values,” she insisted.

Elsewhere, the NA says that “AIDS has taken off undesireables among Whites — homosexuals, intravenous drug users, and those who have sex with non-Whites. That, M’lord, is hate.”

In a country that does not have a Second Amendment to protect the right to keep and bear arms, Miss Fawcett was very critical of the NA Handbook urging members to have weapons for the defence of their family or to join the state militia, if necessary. The Handbook recommended a riot gun, a military semi-automatic rifle, a handgun and at least 500 rounds of ammunition.

She took great exception to the NA saying: “The Aryan Race has the right to ensure its own survival and it must have a White living space including Europe, North America and the southern tip of Africa.”

NA Chairman Erich Gleibe in an affidavit “says the National Alliance has no programmes in Canada, but the effect of the National Alliance message is to corrupt people and turn a small receptive minority against multiculturalism. We can stop printed material at the border and we have ‘anti-hate’ legislation but the Internet can reach so many.”

Concluding, she said: “This Court has the power to strike down the testamentary gift to the National Alliance and stop it spreading its message of hate.”