Ursula Haverbeck, 89, Sentenced to 14 Months in Jail for Heresy
The Cultural Marxist globalist elite who hold sway in much of Western politics and who have a hammerlock on the media and academe sneer at Christianity. However, they are true believers in the new religion of holocaust — a series of sketchy dogmas that cannot withstand scientific or historical scrutiny — a control mechanism meant to cripple believers with self-hating guilt. Canadians or Americans who naively gave their youth, as did my parents,  and sometimes their lives in the belief they were bringing “democracy” to Germany were deceived.An elected National Socialist regime has been replaced by a tyranny that is so unsure of its own legitimacy that it throws an regal, unstoppable 89-year old grandmother — and not for the first time –into prison for being a skeptic about this secular religion of control and guilt.
Paul Fromm
Director
CANADIAN ASSOCIATION FOR FREE EXPRESSION

Ursula Haverbeck, often dubbed the “Nazi Grandma” in the German press, has been sentenced to 14 months in prison for incitement of racial hatred. Haverbeck has been handed several jail terms but has yet to be jailed. 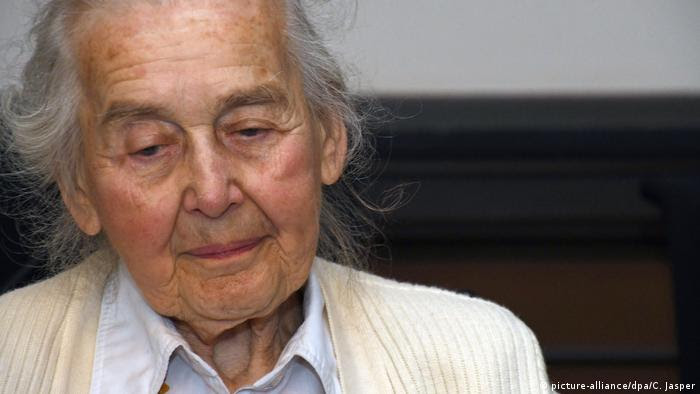 A German court in Detmold has sentenced Holocaust denier Ursula Haverbeck to 14 months in prison, after the 89-year-old woman lost her appeal to a prior conviction on Tuesday. However, four months were shaved off her original conviction of 18 months. Prosecutors wanted the sentence upheld, Haverbeck’s lawyers were seeking exoneration.

The Detmold court had initially sentenced Haverbeck to eight months imprisonment in September 2016, after she sent a letter to the town’s mayor, Rainer Heller, claiming that Auschwitz was not a concentration camp.

Following the trial, the octogenarian handed out pamphlets to journalists, as well as the judge and prosecutor, entitled “Only the truth will set you free,” in which she once again denied the Nazi atrocities. Haverbeck was handed an additional 10-month sentence for the stunt.

Under German law, denying the Holocaust — in which 6 million Jews were murdered by the Nazis between 1941 and 1945 — constitutes incitement of racial hatred and can carry a prison sentence of up to five years.

Haverbeck and her late husband Werner Georg Haverbeck, who was an active member of the Nazi party in the run-up to and during the Second World War, founded a right-wing education center called Collegium Humanum, which has been banned since 2008. She has also written for the right-wing magazine Stimme des Reiches (Voice of the Empire), which she also used to express her views that the Holocaust never took place.

Haverbeck, from the German town of Vlotho near Bielefeld, has been sentenced for similar charges on five other occasions. The most recent, in October, saw her sentenced to six months in prison by a district court in Berlin for incitement of racial hatred after she claimed at a public event that the gas chambers and Auschwitz concentration camp “were not real.”

In August she was handed a two-year sentence by a regional court in Lower Saxony.

Haverbeck has appealed the rulings passed down against her and proceedings in each other case remains ongoing. Haverbeck claims she has been merely been repeating an opinion.

This Tuesday’s appeal verdict is not final, either. Haverbeck’s lawyers intend to take the case to the Higher Regional Court in the town of Hamm, their last chance to challenge the sentence.