Dear Arthur: The world owes you an Apology and a great big Thank-You.

First the Apology. For ten years of harassment, invasion and intrusion, and a giant legal battle. All for telling the truth. In a world where truth and lies are inverted, in a world where everything is turned upside-down, your truth-telling has been deemed a crime.

Now the Thank You. Your principled and valiant truth-telling , unwavering in the face of huge obstacles, has been momentous! You have enlightened and inspired untold many of us. The ripple effect of your work will grow into a tsunami of Light and Truth. 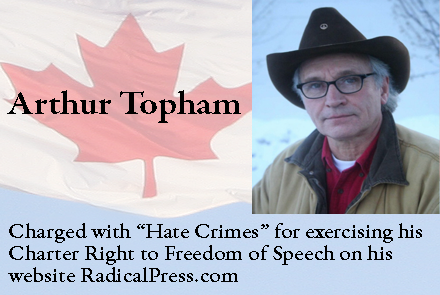 Arthur Topham of Quesnel B.C. has been sentenced to silence for now, after a 10 year legal battle. His crime is that he fearlessly wrote about the state of the world in his online website RadicalPress.com, and that was just too much for the Zionist Powers to bear.

Those who feel threatened by a peaceful man expressing his views online are obviously very nervous and afraid. If there was nothing to hide and if these online publishings were so erroneous as they would like us to believe, this group would not feel threatened. Arthur Topham would simply be ignored. The reaction alone should be enough to trigger people to question: what is it that is so taboo to say?

Trying to stop the truth from coming out is as futile as if you were trying to drink the lake dry to prevent drowning in it. Even the modern-day book burnings cannot succeed in vaporizing the truth. The truth is emerging at an exponential rate, and these desparate attempts by the Powers-That-Be to silence truth-tellers are a show of their panic.

Harry Abrams and Richard Warman are the two men who initiated the legal assault against Arthur Topham. Those are their names. Arthur was not allowed to ever mention their names during those years of legal battle because somehow they feared it might bring danger to their lives. Now what about the danger they posed to Arthur, endlessly defaming him?!

In a trial by jury in October-November 2015, Arthur Topham was found guilty on one count and not guilty on another count of exactly the same charge, namely, by communicating statements, other than in private conversation, willfully promoting hatred against an identifiable group, people of the Jewish religion or ethnic origin, contrary to section 319(2) of Criminal Code of Canada. The identical two charges were for different time periods.

In the Canadian court of law, the burden of proof switches to the defense to affirm that there was no ‘hate’ under CCC  section 319(2). The prosecution need not produce victims of the alleged hatred. What is ‘hate’ but an emotion? How does anybody know what is in someone else’s head?

One of the defenses is 319(2)(c) if the statements were relevant to any subject of public interest, the discussion of which was for the public benefit, and if on reasonable grounds he believed them to be true. Again, how can anyone prove that Arthur Topham did not believe what he was writing? Are they mind-readers?

For an interesting commentary of the extraordinary trial and background, please see this article by Eve Mykytin. She is an American lawyer who attended the second week of the trial. She covers, for example, the story of Len Rudner who was established as an expert witness for the Crown. His written expert opinion was identical to the written expert opinion submitted by Bernie Farber who was originally supposed to be the Crown’s expert witness. (Farber pulled out of his commitment when he learned that he would not be permitted to appear via video-link.) Yet Len Rudner told the court that he himself was the author of his “expert opinion”. Rudner also had tried to have Arthur Topham’s website shut down before the trial. Conflict of interest, is it not? Still, he was permitted to be an expert witness. Very strange, to say the least.

It can be fairly assumed that Arthur Topham’s parody on the infamous book Germany Must Perish was the item which caused the jury to give a guilty verdict, as the publishing of that parody fell within the “guilty” time period. Germany Must Perish was written in 1941 by an American Jew named Theodore Kaufman, and it was generally praised and promoted at that time by the mainstream media (MSM).

The sheer monstrosity of the book is breathtaking, and even more shocking is the fact that it was not condemned when it appeared in 1941. Theodore Kaufman concocted a sick plan to annihilate the German people, the stated goal being that Germany must perish. The plan was to hire thousands of surgeons to sterilize all German men of reproductive age, and voilà, no more Germans. Gone Forever.

The hateful book was subsequently almost forgotten, until Arthur Topham found a provocative way to bring attention to the hideousness of that genocidal text. He reproduced portions of the book word for word, except that he replaced “Germany” with “Israel” and “Germans” with “Jews”. Germany Must Perish became Israel Must Perish, and so on. The two texts, original and parody, appeared side by side on his website. 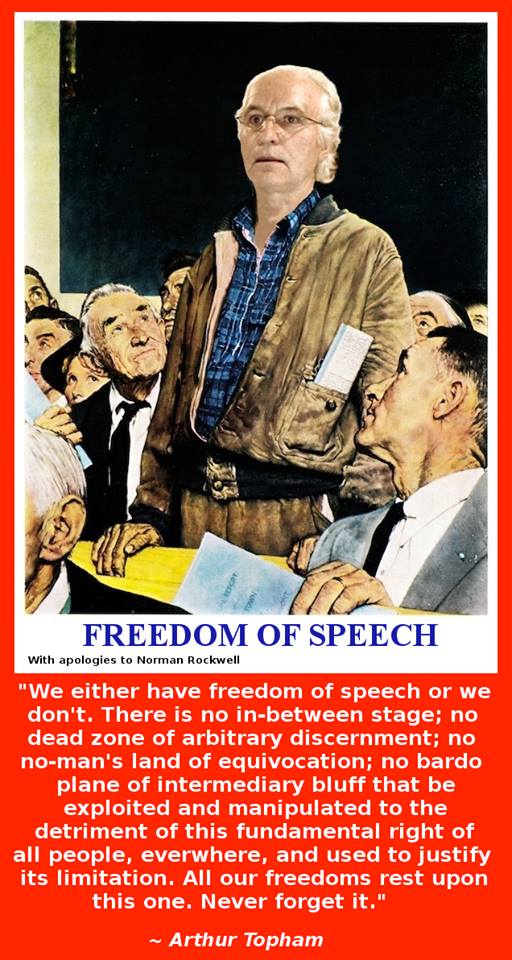 In a trick of Orwellian Doublespeak, B’nai Brith Canada now tells the world that Arthur Topham called for Jews to be forcibly sterilized. No context, nothing. It is crazy making! It is just another glaring example of how B’nai Brith and the MSM engage in deliberate deception to turn reality 100% on its head. Unless someone has been following the case very closely, the uninformed general public has no reason to doubt the story they are told about how Arthur Topham called for sterilization of the Jews. People cannot even check for themselves, because the website has been taken down, as part of sentencing.

In these times of universal deceipt, the messenger who seeks to warn us about the villain, is himself labelled the villain.

Perhaps the members of the jury did not understand the meaning of satire or parody. Or perhaps the convoluted court proceedings or the instructions given by the judge curtailed their ability to perceive it this way. The jury members are also not immune to the mind-contaminating effects of all the toxic lies and atrocity propaganda we have been subjected to since birth. We have been programmed to respond in specific ways to certain words, these words being the number one weapon in the psychological warfare being conducted on us without most of us realizing it.

Judge Admits There Was No Incitement

He does not call for violence; his views were political satire. It is not his intent to indirectly incite violence.

~ the judge said during the sentencing proceedings.

By these words, does the judge basically exonerate Arthur Topham? Methinks so.

I felt that I had a duty as a Canadian citizen to alert the general public of an imminent threat… the interests of the Jewish lobby.

He also expressed gratitude that his concerns had been brought to the record.

From the Times of Israel article: B’nai B’rith was not satisfied with the sentence, tweeting that it “is very disappointed by lenient sentence for Arthur Topham, convicted of promoting #antisemitism.”

The CEO of B’nai Brith Canada, Michael Mostyn, said that

the timing is especially disturbing, as Canada’s Jewish community reels from a series of bomb threats against our community centers, inspired by the same hateful ideology that drives Mr. Topham. [He] is a committed and unrepentant Jew-hater, who persisted in publishing lurid anti-Semitic content on his website throughout this legal process. Canada’s laissez-faire approach to hate crimes continues to fail minority groups and puts them at increased risk of attacks against their lives or property.

This is interesting in light of the news that an American-Israeli Jewish teen has just been arrested in connection with a series of bomb threats against Jewish institutions on several continents. Good timing Mr. Mostyn, very disturbing indeed.

Canada’s Hate Speech Laws – Who Do They Serve?

Well said Arthur! If some things are not permitted to be said, then we do not have freedom of speech. Period.

I have heard seemingly intelligent people repeat the mantra which has been programmed into their heads “but hate speech is not the same as free speech”! I say to them, who determines what “hate” speech is? Who controls the Mass Media? Who controls Hollywood? Who controls our law-makers?

Truth is Hate to those who Hate the Truth.

To learn who rules over you, simply find out who you are not allowed to criticize. ~ Voltaire

THANK YOU ARTHUR TOPHAM for your service to humanity! Enjoy the imposed quiet time. The torch is being passed forward. There are countless torch carriers. 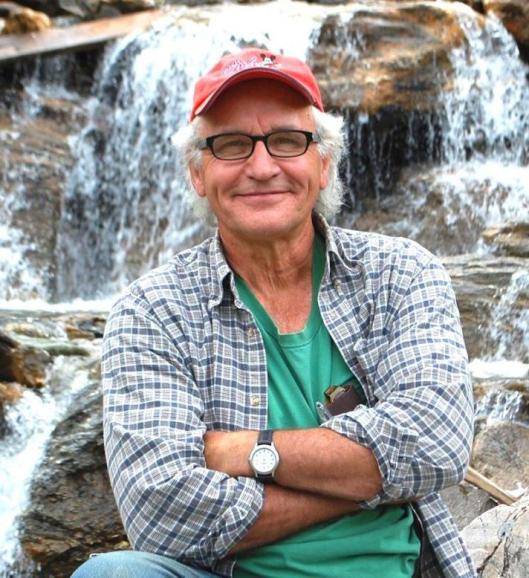