Ever since I was alerted by Dr Gunther Kümel to the medical plight of imprisoned lawyer, philosopher and German Attorney Horst Mahler – for whom Dr Kümel was the first to institute fundraising to assist his defence and medical requirements – I have long wished to draw the stark contrast between the prison conditions of Norwegian mass-murderer and child killer Anders Breivik, and the incarceration of the brave truth-seeking Horst Mahler. 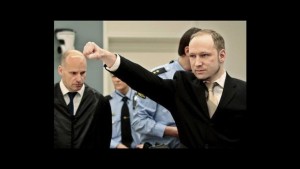 Breivik’s former salute: a combination of “black power” and Marxism. 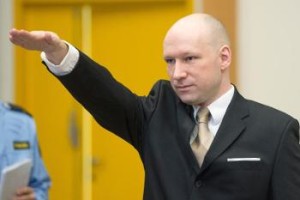 Breivik’s obscene fey parody of a national socialist salute (the main focus of the world’s media attention) has encouraged malicious commentators to label him a “neo-Nazi” – despite his being a blatant worshipper of criminal Zionist imperialism, who targeted his victims because of their calls (in defence of Palestinian rights) for boycotts of Israeli produce.  World Zionism and National Socialism are incompatible ideologies. 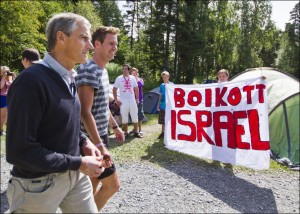 Breivik’s victims at a Norwegian youth camp supported the boycott of Israeli produce as part of their campaign for Palestinian rights.

His own pro-Israeli chutzpah insults his victims’ families, alongside all the laws of natural justice, with his complaints about the standards of decoration in his cell.  Further issues for the “persecuted” murderer (as noted by world syndicated reports) are that his coffee is sometimes cold and butter insufficient for his bread.  The vainglorious butcher Breivik also complains about not having been allowed moisturiser, without which might the fraud lack his camera appeal?  Naïve Norwegian liberals insult the taxpaying public with their support of all these consecutive courts of appeal, whereby ultimately The Hague court of human rights must hear sociopathic Breivik’s protest that the Playstation supplied free in his multi-roomed cell is not the very latest version.

Meanwhile Horst Mahler – whose “crimes” involved not murdering children but daring to speak the truth as he saw it about historical and philosophical issues at the core of Germany’s 21stcentury crisis – is now 80 years old and has consistently been denied all normal rights of appeal. 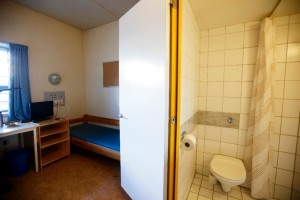 All mod cons for murderer Breivik

While courts in Norway eagerly provide platforms for Breivik to complain that his computer games are not up to date, Mahler is unable to raise the most fundamental questions relevant to his defence, since the German courts rule that certain evidence cannot be discussed, even if it is supplied by qualified scientists, historians and other academic investigators of the highest calibre.

While Breivik insists on moisturiser, Mahler (following the amputation of his lower left leg) relies on international fundraisers to provide the potential for him to live in his own home – assuming he is ever released.

Horst Mahler remains incarcerated despite life-threatening illness and the amputation of his lower left leg.

And while Breivik – despite his boasted responsibility for horrific murders – can look forward to being released by his mid-50s, Mahler is now 80 and knows that the German establishment is determined that he will never again live as a free man.  The question remains – with Horst Mahler subjected to such treatment, how can any European consider himself living in a just society?