A sombre vigil at York University for the victims of last week’s deadly New Zealand mosque attack erupted into chaos Monday afternoon when one person showed up wearing a MAGA hat.

The red and white “Make America Great Again” cap has become a widely divisive symbol since the 2016 U.S. Presidential Election, synonymous with members of the alt-right movement and other extremist groups who helped carry Donald Trump to victory.

Wearing a MAGA hat anywhere in Canada is risky for those who wish to avoid confrontation, but wearing a MAGA hat to a vigil for victims of an Islamaphobic hate crime that killed 49 people is… well, many at York yesterday seemed to feel it was an act of provocation.

Video footage from Monday afternoon’s vigil shows a dramatic confrontation between a young man in a MAGA hat and several attendees. 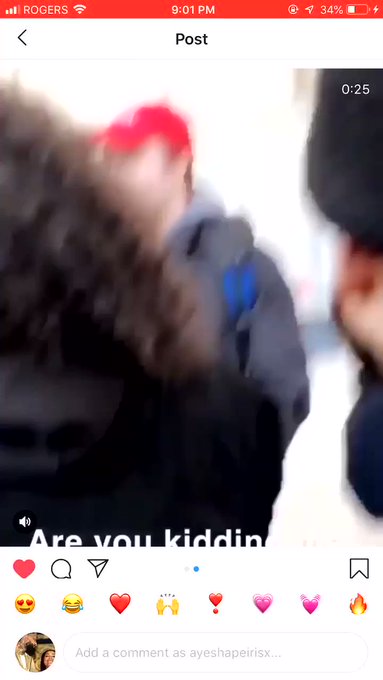 I’m disgusted to even be posting this but I think people should be informed. Today a student at york University decided to wear a “MAGA” hat, and decided to stand at the vigil held by york students to honour those who were murdered due to the horrific terrorist attacks in NZ.

At first, the man can be seen on camera arguing with angry vigil attendees who are asking him to leave.

“I can stand here if I want,” he says in one video, at which point some people really go off, calling the man everything from “a disgrace” to an “obnoxious asshat.”

Another video starts with an attendee telling the man that “these people don’t owe you an explanation, you just need to leave.” The man is seen smiling and playing with his phone as students grow increasingly irate.

“You’re wearing a symbol of racism, get the f**k out! Get out of here, right now!” shouts another person, at which point several people start chanting “Get out!” 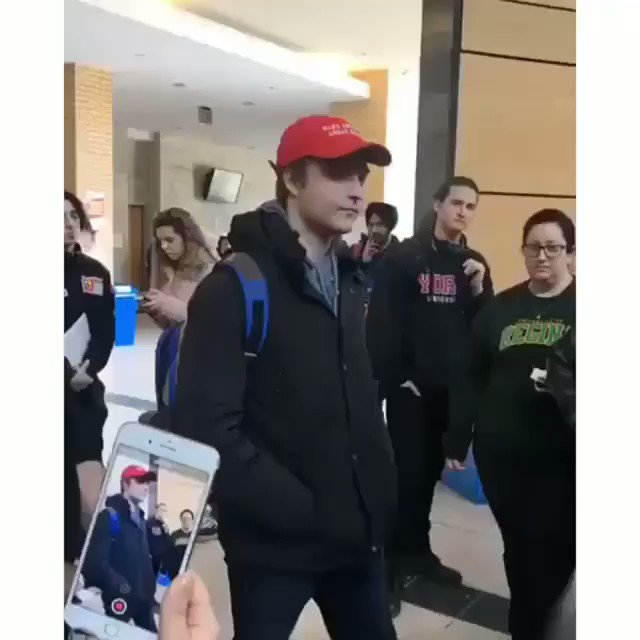 Footage of the incident has been circulating since Monday night on Instagram, Reddit and Twitter, prompting outrage among many of those who’ve seen it (and sympathy from some others).

“Anyone that wears a MAGA hat in Canada is straight up a dumbass,” reads the top-voted comment in a Reddit thread about the man’s actions.

“Ignoring the ethics stuff, the infatuation some people have in this country with an American leader that harms Canadian industry and trade is mind boggling,” the comment continues. “Anybody that is a Canadian Trump supporter is a straight up moron, more moronic than his voter base in the U.S. where at least his intentions are America first.”

Some people are having a problem understanding why that guy wearing a MAGA hat shouldn’t have been at the vigil at York. Maybe this will clear up what the MAGA brand represents and why it was inappropriate to wear in that situation.

I cant believe the president of America endorsed this and clearly showed his support for anti-religious propaganda. And im not shocked b/c ‘he exposed muslims’ im shocked b/c he’s promoting a false image of them https://twitter.com/ajplus/status/935844972372271105 …

15 people are talking about this

Making matters worse is what authorities believe to have provoked the terror attack in Christchurch, New Zealand.

The person suspected of carrying out the shootings is said to have published 74-page dossier containing “extremist alt-right” and “white nationalist” ideology before entering the mosques.

“It’s so shitty and disrespectful, like how can you disrespect 49 dead people because your political views are different than the majority,” commented one person in a different Reddit thread linking to the video.

“This vigil was no place for anyone to preach their political views in the first place, it was a group of people remembering those who died in a racially motivated massacre,” they continued. “In my opinion it’s not a political issue, it’s a moral one.”