Welcome! This video is of Brian Ruhe being interviewed by Paul Fromm, Director, Canadian Association for Free Expression. This is about how a representative of the  powerful Jewish organization, B’nai Brith attacked Buddhist teacher Brian Ruhe in August and September 2015.

Brian taught courses and Mindfulness Meditation and Buddhism at the Roundhouse Community and Arts Centre in Vancouver, BC, Canada. On August 28th, the Georgia Straight website at straight.com posted the following story about Brian Ruhe getting fired from Capilano University:

A senior B’nai Brith member, Harry Abrams, posted a comment on the blog following this article stating that we wrote to the Parks Board to get Brian fired from his teaching jobs. On Sept. 14th, Brian received his first phone call informing that he was fired from the Roundhouse, as described in this video. On Sept. 16th another community centre supervisor called Brian to inform him that his courses were canceled after 16 years at the Kitsilano Community Centre as well as at the False Creek Community Centre because of “low enrollment” even though his course at False Creek was not due to start until October 1st and there was plenty of time to promote the course!

Dear Radical Press Reader,
It has been close to a month now since I last posted an article. This is a rather long time given the usual amount of information regularly furnished to the site and it requires further explanation.
Since the end of April I have been caring for an older brother of mine who came down with a serious case of melanoma (skin cancer). Being on his own and handicapped and living in North Vancouver I had little choice but to spend a great deal of time away from my home in Cottonwood, B.C. (approximately 700 km NE of Vancouver).
My dear brother David passed away on July 1st and since that time I’ve been dealing with all the legal matters associated with his death. All of this has taken a heavy toll on my time and energy and prevented me from carrying on with my normal line of work, i.e. exposing the Zionist New World Order agenda and defending myself against the spurious, politically-motivated Sec. 319(2) CCC “hate crime” criminal charges that were brought against me back in May of 2012 thanks to the machinations of B’nai Brith Canada and its agents working for the Jewish lobby.
It was during one of my trips to the coast that I attended the hearing being held in the B.C. Supreme Court in Vancouver in June. That event and the outcome of it will be the subject of my next Legal Update. Suffice it to say here that the judge hearing the case, Justice Butler, declined to allow the Charter challenge to proceed prior to the pending trial set for October 26th, 2015.
What this means is that the case will proceed to trial although it is still uncertain as to whether or not the actual date set will remain fixed. This is due to the fact that now that the Charterapplication has been refused and the majority of the funds raised in order to pay counsel to represent me at the hearing are exhausted I am faced with having to raise another substantial amount of money in order to retain counsel for the actual trial in the fall. What that amount will be is not determined at this point. My current counsel was acting on my behalf on what in legalese is called a “limited retainer” which means that he was hired only to deal with the Charter application. The trial itself, which could run for ten days, will require additional funding upwards of possibly $40,000.00. The exact amount is still undetermined at this stage but it means that I will have to re-apply for another Rowbotham application in order to assist me in paying the cost of hiring counsel.
The procedure for doing a Rowbotham was initiated back in June when I approached the local Legal Aid office here in Quesnel and, as per their unreasonable policies, was refused based upon the amount of donations that I was receiving at the time. I then wrote to the provincial office in Vancouver requesting that they reconsider their decision and I am currently awaiting word from the head office. When they reply and refuse me a second time (which they inevitably do) then I can proceed with the Rowbotham application. Time of course is running out and it does take time to jump through all the legal hoops involved in applying for funding in this manner for the Attorney General’s office is not about to assist me in hiring counsel when, at the same time, they are hell-bent on convicting me of this spurious, politically-motivated “hate” charge. So the outcome of this next stage of developments is still very tentative and uncertain. If I cannot come up with the funds then I will be left with only one recourse and that will be to represent myself.
My GoGetFunding account is still active for those who may wish to assist in helping me to defray the cost of retaining their constitutional right to freedom of speech here in Canada. It will be a tough row to hoe to raise another $35 to $40 thousand dollars to fight this Zionist-created creature in the courtroom but one way or another the challenge must be met if Canadians wish to retain their most valued and fundamental right.
http://gogetfunding.com/canadian-publisher-faces-jail-for-political-writings/
One final word on the planned Legal Update. I’m still not sure of my schedule over the next month or so as I am awaiting word from the lawyer who is dealing with my brother’s estate. I am currently at home but could be forced to return to North Vancouver any day and then my ability to focus on the update will undoubtedly be delayed.
My apologies to readers for all of this extra hindrance and the lack of posts. Hopefully this will return to normal in the next while.
Sincerely,
Arthur Topham
Pub/Ed
The Radical Press
Canada’s Radical News Network
“Digging to the root of the issues since 1998″ 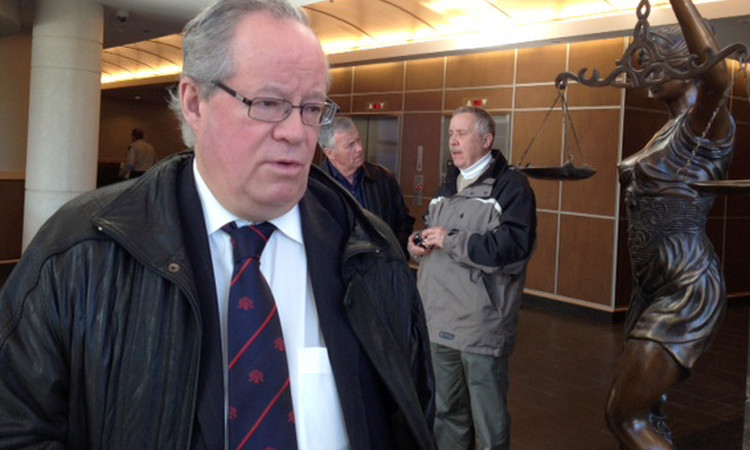 SAINT JOHN – A Court of Queen’s Bench judge has reserved his decision on whether a Saint John man’s will is legal and can bequeath about $250,000 in rare coins and antiquities to an American neo-Nazi group.

Harry Robert McCorkill left his estate to the National Alliance when he died in 2004. A decade later, his sister, some rights groups and the province of New Brunswick went to court to prevent the money from flowing to the white supremacist, anti-Semitic organization.

The trial into the matter, held Monday and Tuesday, saw lawyers from both sides make arguments in an unusual legal case that weighs peoples’ individual right to leave their estate to whomever – and whatever type of organization – they choose against the court’s ability to intervene in special circumstances that are deemed against “public policy.”

There’s little case law on the subject and in many ways, the debate around the McCorkill estate is unique and breaks new legal ground.

Dan Delaquis, a lawyer for the Centre for Israel and Jewish Affairs, told the court Tuesday that the gift, if it’s permitted to stand, will be “detrimental to the Jewish community” and will result in an erosion of Canadian values because the National Alliance has a mandate of hate and is a well-known white supremacist group.

“We submit in this case that the public interest must outweigh the wish of Mr. McCorkill,” he said.

Marc-Antoine Chiasson, a lawyer for Isabelle Rose McCorkill, argued that one need only look at the National Alliance’s own handbook to see firsthand how it purports a racist message.

He read excerpts of the small handbook in court on Monday, highlighting how it points to “white” living spaces with white schools and residential areas with the overall view to create a white world.

Chiasson also pointed to the words of National Alliance founder William Luther Pierce and described his books, Hunter and The Turner Diaries, which were written under the pseudonym “Andrew Macdonald,” as repugnant.

But Andy Lodge, a lawyer for the Canadian Association for Free Expression (CAFE), told the court Tuesday that the fact that an organization may be considered “morally reprehensible” should have no impact on whether it can be a beneficiary of an estate. He pointed out that there are no laws prohibiting even a serial killer or a drug dealer to receive assets from a will.

For the court to evaluate whether a beneficiary such as the National Alliance is against “public policy,” he argued, would open “Pandora’s box.”

He said it would do more harm than good if the courts started assessing a beneficiary’s past or try to predict how they would spend the money they receive from a will.

Lodge described the court debate over McCorkill’s will as an “exercise in futility.” He argued there is no legal basis to challenge the will because it’s valid, follows New Brunswick’s Wills Act and contains no words that are contrary to Canada’s public policy.

The lawyer said he knows of no law that would prohibit a living person in Canada from giving money to the National Alliance.

John Hughes, the lawyer for the executor of the estate Fred Streed, argued that the application to prevent the disposition of McCorkill’s estate to the National Alliance should be dismissed.

Isabelle McCorkill didn’t attend the trial in Saint John nor did any representative from the National Alliance, a West-Virginia based organization.

Chiasson, her lawyer, has said that the legal battle over her brother’s estate has never been about the money, but rather, about preventing it from going to a neo-Nazi group.

Catherine Fawcett, who represents the League for Human Rights of B’nai Brith Canada, also argued that the gift to the National Alliance is “completely against public policy” and pointed to the connection between hate propaganda and violence.

McCorkill’s estate includes, among other items, a collection of hundreds of Greek, Roman, and Italian coins – some dating back to 525 BC – that he amassed since the 1970s. Some items were once displayed at the University of Saskatchewan’s Antiquities Museum and a release from that institution in 1997 described him as a well-travelled collector and a chemist who spent time at MIT and the Smithsonian Institution.

Little else is known about the man or why he lived in Saint John, where he moved about a year before his death. He lived quietly in a townhouse in Millidgeville and after he died at home in 2004, his body remained at the Saint John Regional Hospital for nearly two weeks while the authorities tried to track down his next of kin.

The National Alliance paid for his funeral and hired Malcolm Ross and William Ross of Moncton to transport, store and take inventory of his assets.

Malcolm Ross, who attended McCorkill’s court hearing in Saint John on Tuesday with his brother, was the focus of a 1996 Supreme Court ruling that found that the former Moncton-area teacher whose off-duty writings claimed Christians were under attack by an international Jewish conspiracy, had in fact “poisoned” the educational environment. The ruling upheld a human rights board of inquiry that ordered Ross into a non-teaching job.

Outside court, he told the Telegraph-Journal that he was there to “observe,” but declined to comment on his connection to the McCorkill matter.